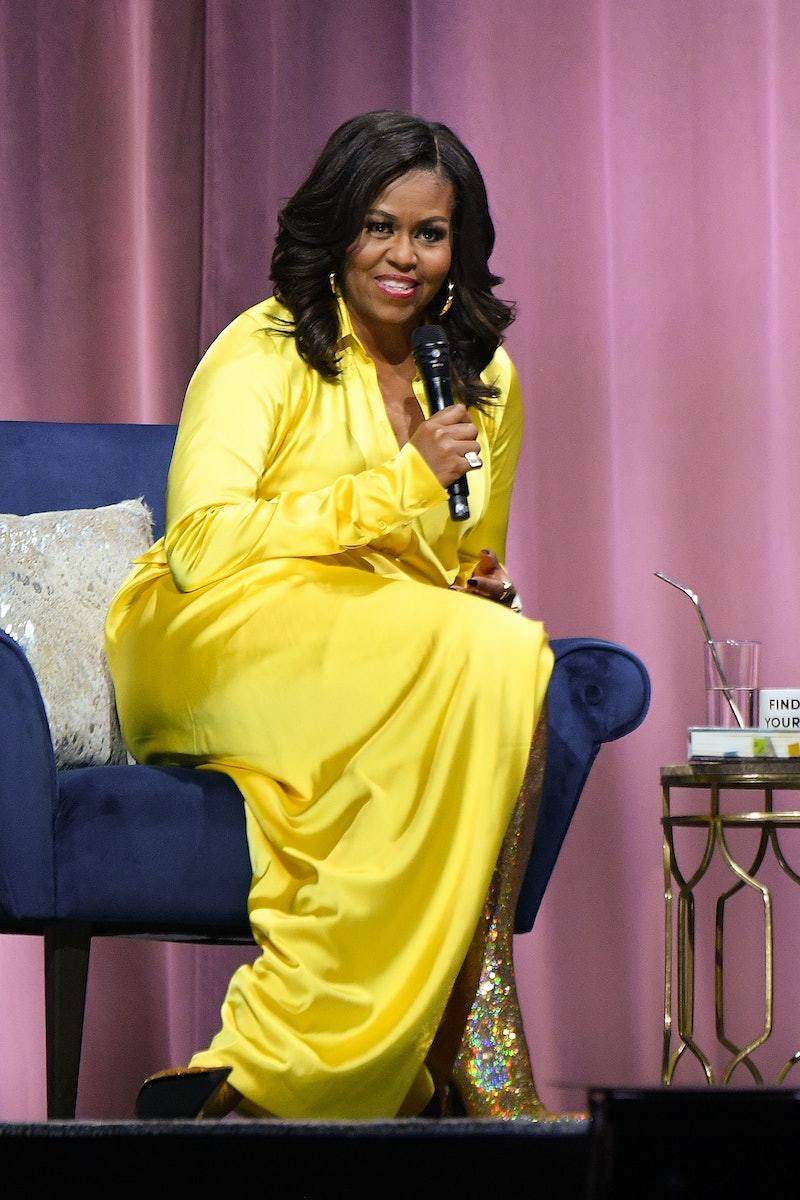 During her eight years in the White House, Michelle Obama redefined what a First Lady dresses like. Now that the presidency is behind her and her family, Obama has tapped further into her sartorial creativity. Her most recent outfit is a case in point, where Obama wore a purple pantsuit for her latest Becoming book tour stop in Atlanta. While the suit itself is chic, its the way that Obama styled it that makes it newsworthy. The former First Lady paired a power suit with a '00s party top, proving that business wear is entering into a new era.

The purple silk suit is from Sergio Hudson's Fall 2019 collection. For those who have not heard of the brand, the label is found in the wardrobes of A-listers like Beyonce (who were a bejeweled white skirt suit) and Amal Clooney (who wore a red silk jumpsuit.)

The pant suit had all the makings of a Dynasty-era outfit, complete with power shoulders, a wide buckle brass belt, and a line of brass buttons on the sleeves. In the original collection, the suit came in a fiery red shade. Obama requested a custom eggplant color for her own wardrobe.

The original Sergio Hudson suit also came with wide leg, bell bottom pants that had a mid-calf cuff accented with fringe. Obama decided to opt out of that playful detail and instead went with a more modest silhouette.

But that's not to say that Obama decided to tone down the pant suit outfit. Instead, cutting out the fringe and opting for a jewel toned shade allowed the former First Lady to experiment with another styling route. And that route had to do with glitter.

Obama paired the designer silk suit with what we can call a '00s party top. These tops reigned supreme in the era of Sex and the City. They were the spaghetti strap silk shirts with dangling beads, the sequined tube tops with clear bra straps, and the cowl neck silk shirts with no backs. When one put these tops on, they instantly felt the urge to order a Cosmo and root around for their Razor phone in their baguette bag.

Being the trendsetter that she is, Obama brought back the '00s party top effortlessly — and in a non-cheesy way. Obama wore a custom black sequined bustier by Christy Rilling Studio, adding a touch of glitter to her silk ensemble.

The end result was a sophisticated look full of personality. The outfit was put together with the help of Obama's longtime stylist, Meredith Koop. Koop has been with the former First Lady since day one at the White House, helping Obama hone her style.

Now that Obama has left 1600 Pennsylvania Avenue behind, she is enjoying flexing her sartorial skills and trying out bolder, more creative outfits. It just so happens that a '00s party top and a power suit is part of that fabulous rotation. Take notes, and repeat.

More like this
Harry Styles’ Red Carpet Looks Have One Thing In Common
By El Hunt
15% Pledge Director LaToya Williams-Belfort On The Impact Of Supporting Black Business
By Dominique Norman
Bella Hadid's Best Runway Looks From Paris, Milan, & More
By Allie Fasanella
Halsey Rocked The Exposed Thong Trend At Paris Fashion Week 2022
By Allie Fasanella
Get Even More From Bustle — Sign Up For The Newsletter