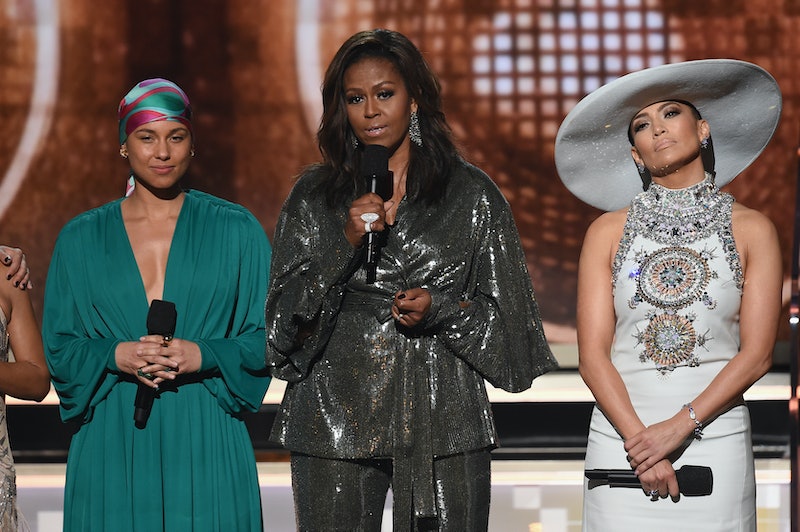 The former first lady's memoir Becoming paints her mom as her biggest and earliest fan — but she almost didn't tune in to see her daughter at the Grammy Awards on Sunday. At least that's what her mom texted after the fact in a hilarious, relatable conversation. Michelle Obama shared her mom's Grammy texts and brought #TextsFromMom to a whole new level.

Obama uploaded the iMessage conversation with her mom, Marian Robinson, to her Instagram. "When your mom doesn't think you're a 'real' celebrity...," Obama posted alongside the screenshots. "Tonight in Phoenix, I shared this text thread from my mom from #Grammys night, and I just had to share it with all of you." Obama's latest stop on her book tour was at Phoenix's Comerica Theatre on Tuesday.

The referenced text conversation shows Robinson's attitude surrounding her daughter's fame. "Did you meet any of the real stars or did you run right after you were done," she asks in the text. As her mom would know, Obama appeared on stage Sunday night with Lady Gaga, Jada Pinkett Smith, Jennifer Lopez, and the show's host, Alicia Keys.

Robinson's understated pride shows through, too. "I guess you were a hit at the Grammys," she started the conversation, with a smiling, tongue-out smiley. And when Obama challenges to say she's a "real" star "by the way," Robinson responds, "Yeah."

Obama's relationship with her mother comes up again and again in Becoming. She credits her mom with advocating for her in elementary school, letting her live at home after law school, and helping take care of the grandkids — even going so far as to move into the White House when Barack was elected. That's just a few of the ways Robinson has shown support.

In Phoenix on Tuesday, Obama again talked about her mom and the importance of their relationship. But, she also said she is changing the way she parents slightly. "I want to see my girls invested in 'me,'" Obama told former presidential adviser Valerie Jarret at the Phoenix stop. "That generation didn't put enough in themselves. We deserve to be put higher on our priority list. I want my girls to ... see my exercising, getting my nails done, and going to the spa. So they see that they can do it in the future, too."

Obama hanging with the stars at the Grammys fits that role she wants for herself in her daughter's life. She talked about her appearance on Instagram, too. "For me, a big part of friendship is showing up for your girls—whether that’s for a birthday, a quick catch-up after work, or a major milestone," Obama posted. "So I was thrilled to be there for the one and only @aliciakeys at the #GRAMMYs. She is one of the most genuine, caring, and thoughtful people I know—there’s no one better to help us all celebrate the unifying power of music!"

Obama wrote in Becoming that she has invested heavily in her female friendships, taking time for weekend getaways at Camp David while she was still living in the White House. Jarrett, who interviewed Obama at the Phoenix book tour stop, is a long-time friend as well as an adviser to the former president.

Obama's next stop is in Austin, Texas, at the end of February.