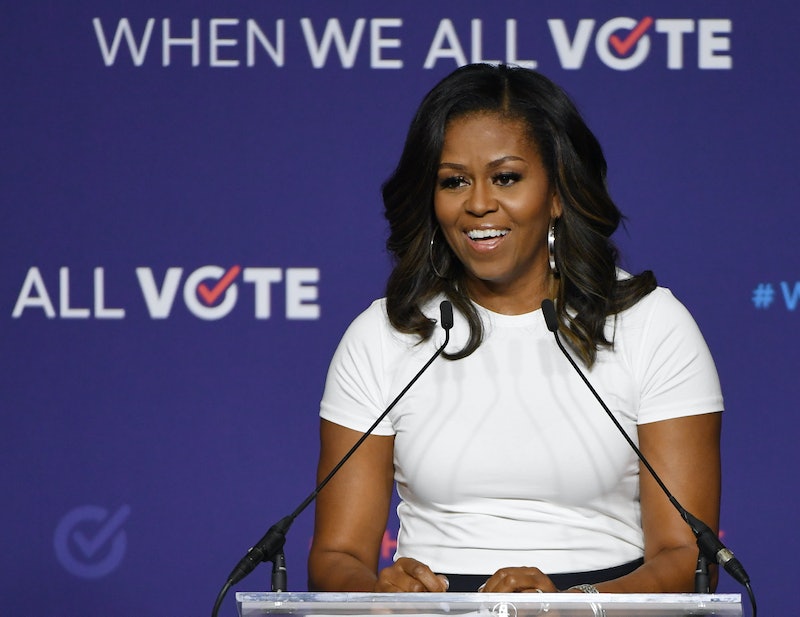 In 2016, the former first lady's motto for a healthy democracy was simple: "When they go low, we go high." Michelle Obama's "when they go low" slogan has undergone several changes from her own party members over the years. But in an exclusive interview with Blavity on Sunday, Obama let her readers know the deeper meaning behind her motto — and why she's still standing by it despite the state of politics today.

"I absolutely still believe that we’ve got to go high — always and without exception. It’s the only way we can keep our dignity. Because if we lose our dignity, what do we have left?" Obama said. "I know that when someone calls you a name, it’s a lot easier to call them one back than to hold your tongue."

The former first lady, who's been busy encouraging Americans to vote in the midterm elections, also said that it took a lot less effort to fall to the level of those "trying to pull you down into the mud." Instead, Obama said people should try not to give their opponents "the satisfaction" of playing by their rules.

Recently, several prominent Democrats have given their spin on Obama's slogan. For instance, former Attorney General Eric Holder said of Obama's motto in early October, "No, no. When they go low, we kick 'em. That’s what this new Democratic Party is about."

Another example of Obama's aspirational motto getting changed up came from attorney Michael Avenatti, a lawyer who has sparked plenty of speculation about a potential 2020 bid. "When they go low," Avenatti said, "I say we hit harder." Then there was Democratic strategist Sean Clegg's version: "When they go low, we kick 'em in the nuts."

There might be people out there who may have some misunderstanding about Obama's motto. Some people may think it means to simply forgo defense against opponents in the name of civility or politeness. But the former first lady made sure that she went into detail about what she had meant when she first uttered the now-famous slogan.

"Now, going high doesn’t mean giving up or ignoring reality," Obama said on Sunday. "It doesn’t mean you shy away from the fight or weaken your principles. It means you lead with your whole heart and your whole soul — your whole value system — and not just whatever happens to be your stance on a given issue."

She added that "going high" as opposed to "going low" was not only about the fight one wanted to win but also about securing a country that one would rather live in.

Obama added that the slogan had personal significance as well. She said that the motto compelled her to consider what kind of upbringing she wanted to give her daughters. The same kind of thought, she said, extended to the broader subject of the future generation.

"Do we want the next generation to be angry?" Obama said. "Do we want them to be spiteful and petty? Or do we want them to live by the values that our parents taught us — values like honesty and generosity and respect?" It came down to understanding the slogan and its wider impact — and trying to practice it during tough times.