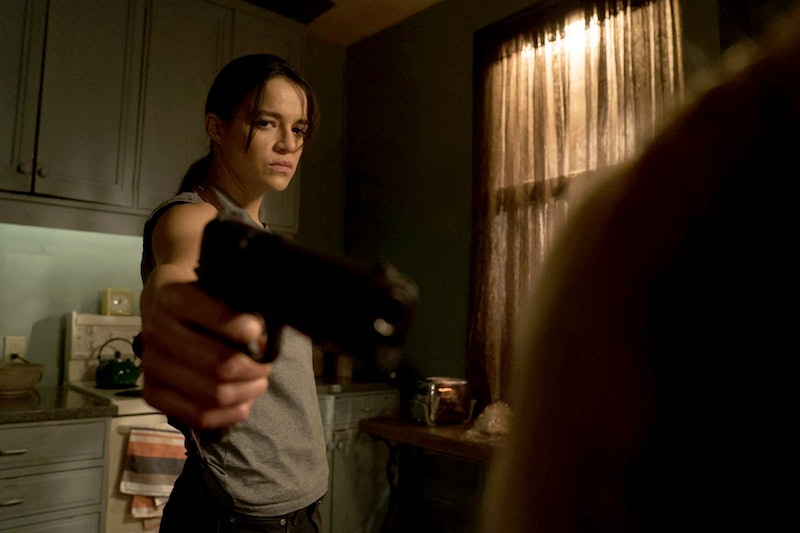 Writer-director Walter Hill (Alien, Deadwood, 48 Hours) and actor Michelle Rodriguez drew the ire of the transgender community in 2016 when their movie The Assignment was first announced. The film, in which a hitman undergoes "forced sex reassignment" as retribution for crossing the wrong person, was criticized for what many considered exploitation of gender and trans issues, and having seen the final product, I can attest that its handling of these subject ranges from awkwardly hamfisted to just laughably bad. Despite a vigorous defense from both the film's director and star to the contrary, the film functionally exploits the public's fascination with trans bodies and the "transformation" aspect of gender/sex transition in a shallow, poorly written way.

The plot of The Assignment follows the interviews of Dr. Rachel Kay (played by Sigourney Weaver) in a forensic psychiatric center as she discusses how she exacted her sex-changing retribution on the cisgender Frank Kitchen (played by Rodriguez, wearing a laughably bad beard), the hitman who killed her brother for failing to pay a debt to some gangster-types. I wish I could say there was more plot to lay to out, but that's pretty much the whole 100 minutes in a nutshell. The rest of the movie is devoted to exploiting trans- and gender-related issues.

...while the film may not be portraying a trans woman, per se, it is still portraying some of the essential experiences of trans women, and doing so in a way that is inaccurate, trivializing, and deeply harmful.

Let's start with the absurd and deeply frustrating portrayal of gender-related surgeries. The hairy and bearded Frank is assaulted and drugged into unconsciousness, then wakes up with a face, chest, and groin wrapped in bandages, which he unwinds to find a perfectly feminine face and body. Any trans woman will tell you that this isn't anything remotely near what the reality of medical transition is actually like. It's an often years-long process that often involves hormones, electrolysis or laser hair removal, as well as surgery. However, the film perpetuates the pervasive and false belief that a hirsute, macho man can miraculously, nearly instantaneously change into a lithe, hairless, attractive woman.

After the surgery, Frank manages to more or less leap out of bed, seemingly without pain, with nary a scar or stitch to worry about, and apparently without any need to dilate his new vagina. In reality, vaginoplasty alone has a months-long recovery period. At a time when many trans women can't afford either the actual costs of these medically-necessary surgeries, let alone the extended time off required to recover from them, it feels like The Assignment both minimizes and trivializes these very important, life-changing procedures.

And though the movie goes to great lengths to explain on multiple occasions that Frank is not a woman or transgender, he's undergone (at least) a facial feminization surgery, a breast augmentation, and vaginoplasty, all very real interventions that some trans women seek out or desire. So while the film may not be portraying a trans woman, per se, it is still portraying some of the essential experiences of trans women, and doing so in a way that is inaccurate, trivializing, and deeply harmful. Given how poorly nearly everything about trans people and our experiences is understood by the wider community, it's incredibly frustrating that The Assignment re-entrenches views of gender surgery that trans activists have been trying to debunk for decades.

It's turning transness into something for public consumption, feeding the cultural allure of the trans feminine bodies.

Beyond the film's poor portrayal of gender-related surgeries, the entire premise still hinges on the idea of "changing gender" as the prurient spectacle that has captured the lurid imagination of the cisgender public for years, and has served to consistently dehumanize trans people into little more than objections of fascination. It's the same fascination that put Christine Jorgensen in headlines in the 1950s (she was an ex-GI trans woman who was the first American known widely for having genital-altering surgery), that put trans people on regular rotation on trashy daytime talk shows in the 1990s, and that drove the tabloid obsession with Caitlyn Jenner before she came out. It's the reason that almost every documentary about trans people has been focused almost completely on transition, and even those that aren't still feel the need to show the "before" pictures.

The Assignment goes to great lengths to play-up this transformation. Early in the movie, viewers are given a full-frontal nude look at Rodriguez's male character, complete with a thick carpet of body hair and an enormous penis. A few minutes later, we get a show of that same nude body vigorously banging the girl Frank's just met. In the aftermath of his surgery, we get another round of nude scenes, putting Rodriguez's breasts, hips, and bottom on display to make clear the stark contrast of these two embodiments of the same person. These scenes turn transness into something for public consumption, feeding the cultural allure of the trans feminine bodies.

What makes The Assignment even more problematic is the way in which it functionally erases trans masculinity. After the work of Dr. Kay, Frank is a person who identifies as a man but has a feminine body. As such, his closest analogue is actually that of a trans man. However, because he no longer has a penis and learns that he can't get one that resembles what he had before, he just shrugs and says he guesses he'll just "be a chick."

In actuality, Frank would probably experience intense feelings of body dysphoria in much the same way that most trans people do. He might choose to start testosterone injections, have a chest reconstruction, and go right back to living as a man. It's frustrating to see the film gloss over just how deeply scarring this experience would be, and for it to miss a chance to make up for its otherwise dismal representation of trans-related subjects by portraying a very common part of trans existence in a way that might actually be relatable to cis people.

Turning womanhood into a punishment to be inflicted is denigrating to all women, and especially to trans women.

Overall, the film's premise is one that is steeped in misogyny: that one of the worst punishments for a man (one somehow worse than death, it would seem) is to be a woman... and worse yet, a trans woman. Dr. Kay makes it very clear that she's trying to inflict as much harm on Frank as possible, and she views turning his body into a woman's body as the worst thing she could do to him. This is little more than a recapitulation of the core notion of misogyny, that there is nothing in the world worse for a man than to be womanly or feminine. Turning womanhood into a punishment to be inflicted is denigrating to all women, and especially to trans women. That this punishment is carried out by another woman only adds insult to injury.

The Assignment does make an effort to distance itself from actual trans people and to attempt to deviate from actual trans experiences. In one scene, post-operation Frank finds his way to a clinic to try to find out if it's possible to "go back to being a guy," and the very concerned doctor explains that it's very unusual for anyone to get these kinds of surgeries without following the well-established medical protocol, strongly recommending therapy. Later in the movie, Dr. Kay declares that her "experiment" on Frank has proven that gender identity is separate from the body because Frank failed to give up his life of crime after "becoming female." Yet while both of these scenes are promising, they're jarringly inserted into the already disjointed storyline in such a way that they feel like they may have been added to appease critics after the controversy in 2016. These brief scenes feel like someone trying to put out a house fire with a squirt gun — it's a nice thought, but they aren't really helping.

Both Hill and Rodriguez have also gone on record saying the film isn't transphobic. When speaking to Reuters at the Toronto Film Festival earlier this year, Rodriguez asserted that because she's bisexual, she would "never do a movie with the intention of offending anybody in the LGBT community because I'm a part of it." And speaking to Variety at the film's premiere in April, Hill argued,

"[Frank's] gone through a sex change, but it’s not a gender change. It’s not at all making fun of or exploiting the people in the transgender community, who I have nothing but sympathy for. Politically, everybody who made this film is a progressive person. The last thing we wanted to do was insult anybody."

The film doesn't read as an intentional dig at trans people, but it does feel like an awkward attempt by cis creators to handle a subject matter that was well out of their depth. The Assignment has plenty of issues beyond its handling of trans issues — the performances are disappointing and the dialogue is abysmal, among other problems — but its deeply problematic look at gender is its worst.

There are plenty of fertile and as-yet untouched territory to explore when it comes to transgender narratives in film and television — we don't need The Assignment's kind of "what-if" faux-pulp drivel in the mix.

More like this
Why The '365 Days' Sex Scenes Are Good, Even If The Movies Aren’t
By Arya Roshanian
Sandra Bullock, Girlboss Extraordinaire
By Matt Harkins & Viviana Olen
The 'Hocus Pocus' Sequel Finally Has A Release Date & It Makes Total Sense
By Shannon Barbour and Radhika Menon
What Does Doctor Strange’s Third Eye Mean?
By Arya Roshanian
Get Even More From Bustle — Sign Up For The Newsletter