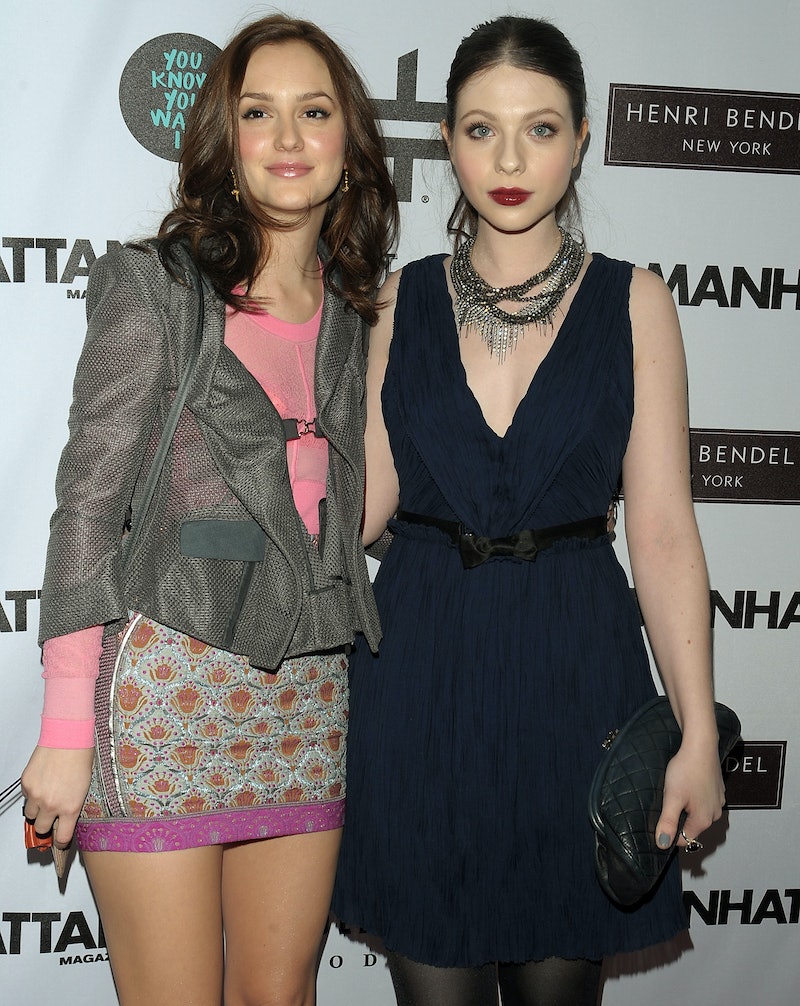 It's been seven years since Gossip Girl ended, but for these friends, it's like no time has passed. Michelle Trachtenberg and Leighton Meester's mini Gossip Girl reunion photos will take loyal fans right back to the glory days with the most elite teens of New York City's Upper East Side. The occasion for their reunion was a mutual friend's bachelorette party, and even the event theme was totally on Gossip Girl brand.

On Monday, Trachtenberg posted a selfie of herself with Meester donned in fabulous costumes like a peacock-feathered hat and beaded headband for the murder mystery-themed bachelorette extravaganza. The picture was appropriately captioned, "Spotted. Ms. Waldorf and Ms. Sparks. In the ballroom. With secrets. I'll never tell. Xoxo 💋" In the captioned, she refers to their Gossip Girl characters, the calculated Georgina Sparks (Trachtenberg) and Upper East Side it girl Blair Waldorf (Meester).

Trachtenberg also shared snippets of the party on her Instagram Story. One photo captured two sets of fabulous gloves at the dinner table with the Clue-themed caption, "Mrs. Peacock in the dining room with the [knife]. #MurderMystery" Another was a selfie with their mutual friend who was the lady of the evening, captioning it, "The bachelorette. In the dining room. With the hammer."

This isn't the only GG reunion Trachtenberg has had and shared with fans lately. In late February, she posted a selfie with former co-star Chace Crawford (who played dreamy athlete Nate Archibald) on Oscar night, writing, "Oh how I adore this man #nightbefore party......spotted xoxo 💋" The beloved teen series may have ended in 2012, but thanks to Trachtenberg it's the gift that keeps on giving.

Given their busy schedules and lives, it's great to see that these former colleagues still share a close bond. Since Gossip Girl, Trachtenberg lent her voice to star in the Facebook Watch animated comedy Human Kind Of in late 2018. Meester, who currently stars in the ABC comedy series Single Parents, is raising her 3-year-old daughter Arlo alongside her actor husband Adam Brody.

As far as a potential TV reunion, Meester has opened up about not wanting to do a Gossip Girl reboot. "A lot of the questions that come from it are: ‘Do you miss it?’ ‘Did you love what you wore?’ And I understand that, but — and I say this with nothing but love — it is like saying, ‘High school was an amazing time for you, do you wish you could go back?’" she explained to PorterEdit last year. "The truth is, it was so special and such a unique, amazing experience, but no, I wouldn’t wanna go back to it, I was a kid."

However, her TV partner in crime, Blake Lively, did express being open to a reboot at one point. In 2017, Lively told Variety, "I don’t know. Why not? It sort of all depends." She explained, "I’ve just learned in life you never say never. I’m looking to do something that I haven’t done yet, not something that I did. But would I do that? Who knows — if it was good, if it made sense." Until then, there's always a good murder mystery party to keep the days of Gossip Girl alive.