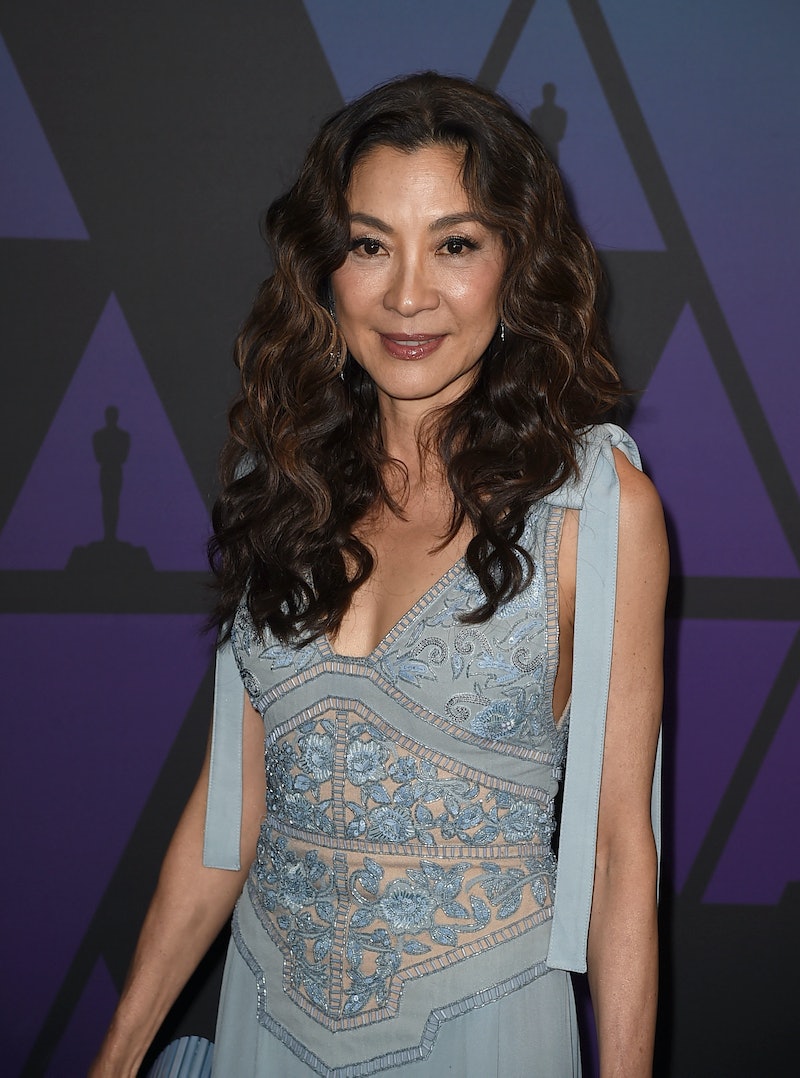 For every award show, there's a red carpet where the fashion can often be more exciting than the award show itself. Michelle Yeoh's red carpet moment at the 2019 Golden Globes was certainly no exception. As an ode to the movie she starred in, Michelle Yeoh wore the green Crazy Rich Asians ring on the 2019 Golden Globes red carpet, and it's putting fans in the right mood for the pre-show.

The Crazy Rich Asians actor appeared on the red carpet as one of the earlier arrivals on Sunday evening for the awards ceremony. She donned a sleeveless bright lime green dress featuring a deep V-neck and a matching shawl. While fans of the star were living for her deep green look, one fan on Twitter noticed the familiarity of the heavy rock sitting on her finger as the same ring from the nominated film.

If you're a little fuzzy on the details of the ring that was first spotted in the film (there were so many jewels unveiled in that movie), the ring is the very same one Eleanor, Nick Young's mom, wore when she was forbidden to marry Nick's father. It's also the very same ring Nick gave to Rachel when Eleanor finally accepted Rachel after previously forbidding their marriage to each other.

It's pretty fierce for Yeoh to rock the engagement ring her character didn't want to give up to her future daughter-in-law, but ended up passing over in the sweetest cinema moment in the past year. And make no mistake, the ensemble looks rich!

According to The Knot News, the plan for Eleanor to wear an emerald ring was always in the cards for her character. The costume designer, Mary E. Vogt, said the director envisioned the color as part of Eleanor's recurring style in the film.

"Jon Chu, our director, who is fantastic, always said that he saw emerald as Eleanor’s color,” Vogt said. “He really felt that it was a very regal color, a very strong color, that it was just something that he associated with Eleanor, that green. And so he thought she should have a green engagement ring.”

Funnily enough, the ring isn't any kind of jewelry pull for the movie. The emerald ring she wore in the film actually belongs to Yeoh, and she had it specially designed. Vogt also mentioned to The Knot that Chu had intended the engagement ring to be modeled after the very same one John F. Kennedy gave to Jackie Kennedy.

It seems as though one famous ring carries enough influence to transform into another piece of iconic jewelry for the film.

Just like her character Eleanor, Yeoh’s ring was one of a kind. “Emeralds can have a lot of cracks in them, a lot of flaws,” Vogt said, “but this one was really a flawless emerald, which is hard to find. It’s very classic. It looks like something Cartier could have designed in the 20s.”

Unsurprisingly, Michelle Yeoh may be just as extra as her character in the film with lavish luxuries, and her ring makes everyone wonder if there’s a secret wealthy society she might actually be privy to after all.