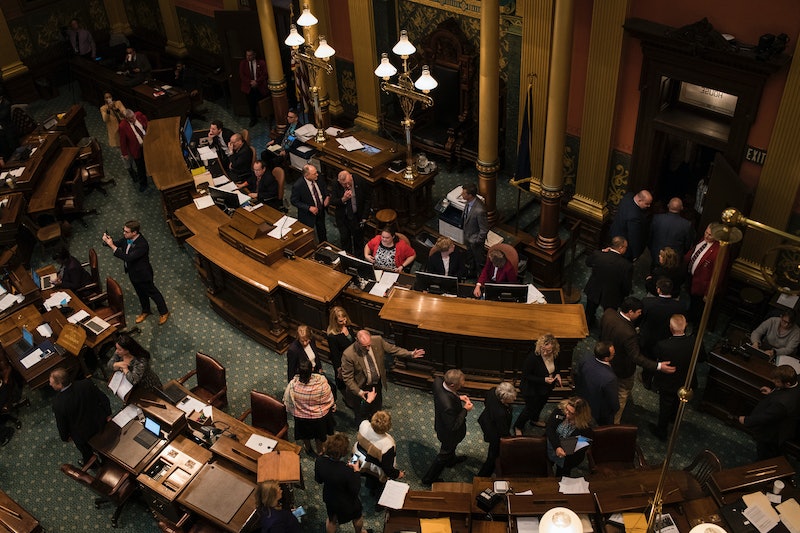 Earlier this year, Michigan activists collected thousands of signatures to put two major pieces of progressive legislation on the midterm ballot. Referendums like these allow initiatives to be voted on directly by the people — in this case, giving liberal bills a chance to bypass a Republican-majority legislature. But the GOP has found a way to interfere anyway: Republicans are impeding Michigan's paid sick leave and minimum wage increase, and critics call their actions unconstitutional, per The Washington Post.

If the measures were to pass, lawmakers wouldn't be able to overturn them without a 75 percent majority (slimmer than the one they held in the chambers, even before the elections). So the Legislature made a counterintuitive move: Instead of waiting for people to vote on the bills, it decided to pass them itself, scheduling a paid sick leave and minimum wage hike (from $9.25 to about $12) to eventually become the law of the land in Michigan, as MLive reported.

But because the Legislature passed these bills instead of having them approved by voters, lawmakers technically only need a simple majority vote among themselves to alter them. They're even able to make changes that negate the entire purpose of the bills in the first place.

And that's exactly what they just did. On Tuesday, the Legislature voted to push back the gradual minimum wage increase until 2030; it was supposed to take place by 2022. It also voted to decrease the amount of paid sick leave required at larger businesses and offered complete exemptions for some smaller businesses.

Critics are saying that the lawmakers' actions are unconstitutional. In 1964, Michigan's Democratic attorney general declared that the Legislature cannot change a voter-initiated law in the same session that it was passed. The state's current attorney general, Republican Bill Schuette, argued the opposite this week.

In an official opinion on Monday, he asserted that the writers of the state constitution "did not impose any express limitations" on when lawmakers could amend a law that they passed and the public initiated. "The Legislature enacted the initiated laws and the three-fourths vote requirement does not apply," he added.

Michigan voters shrunk the Republican majorities in both chambers in the Nov. 6 elections, seemingly indicating a degree of backlash to the GOP agenda in the state. It's often considered taboo for an outgoing congress (called a "lame duck congress") to pass significant legislation, since those representatives aren't the ones most recently approved by voters to represent their interests. But that's not stopping Michigan's Legislature from making these enormous changes, which David Eggert at the Associated Press called "unprecedented" on Tuesday.

Activists from Michigan and Wisconsin, another state where major agenda items are being pushed through by the GOP during a lame-duck session, gathered for massive protests in the state capitals this week. In Lansing, some participants sang revamped holiday songs, the Lansing State Journal reported, including a chorus of, "On the first day of lame duck the GOP gave to me / No chance of a livable wage."

Stephanie Chang, one of the state's Democratic representatives, condemned the Legislature's actions on Tuesday. "When the people of our state signed on to support these policies, they did not intend for this body to usurp the process only to strip workers of these new freedoms," she told the AP.