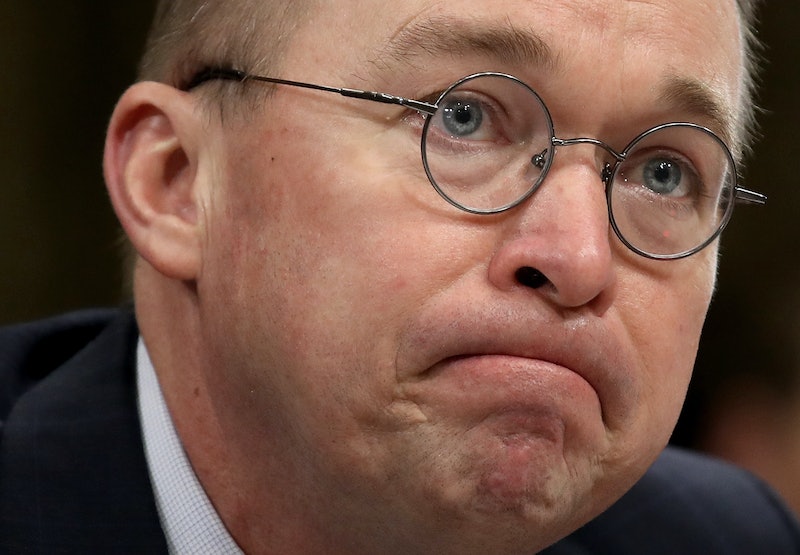 POTUS' new acting chief of staff hasn't always showered the administration in compliments. Recently, Mick Mulvaney's 2016 comments about Trump have resurfaced, and some of them are less than flattering. According to CNN, for example, he made it clear he believed Trump's words and actions would disqualify him from office in an "ordinary universe." Perhaps the most surprising thing of all is that he finished these comments by arguing in favor of a Trump presidency, anyway.

Per CNN, Mulvaney appeared on the Jonathon and Kelly Show, a South Carolina-based radio show, on Oct. 13, 2016. A week before the interview, Trump's infamous Access Hollywood comments were released. Of the tape, Mulvaney said, "My guess is worse stuff is going to come out in the last 30 days."

Mulvaney continued on the show, "They've got more videotapes. Everything the guy's ever said is on a videotape or an audio tape. There is going to be some atrocious things that are gonna come out."

However, Mulvaney did eventually argue that Trump was the better candidate over Hillary Clinton in his monologue. Via CNN, he said,

But his appearance on a radio show wasn't the only time Mulvaney criticized Trump's political run. A video acquired by The Daily Beast revealed another 2016 incident in which Mulvaney called Trump a "terrible human being" at a campaign debate while he was running for South Carolina's 5th District.

In the video, Mulvaney once again clarified that his support for Trump came with a pretty serious caveat. He said, "I'm [supporting Trump] as enthusiastically as I can, given the fact that I think he's a terrible human being, but the choice on the other side is just as bad."

In still another instance in 2016, Mulvaney wrote a Facebook post (which has since been deleted) in which he explained his support for the president. Via The New York Times, Mulvaney wrote, “I think one thing we’ve learned about Donald Trump during this campaign is that he is not a very good person."

Mulvaney continued, “I’ve decided that I don’t particularly like Donald Trump as a person. But I am still voting for him. And I am still asking other people to do the same. And there is one simple reason for that: Hillary Clinton.”

In a recent statement, a spokesperson for Mulvaney said to CNN, "This is old news. These comments were made in 2016, when he was a Congressman and had yet to meet the President."

The statement went on, "Congressman Mulvaney continued to support then-Candidate Trump throughout the election, and his support for President Trump has never wavered while serving within the Administration. He both likes and respects the President, and he likes working for him."