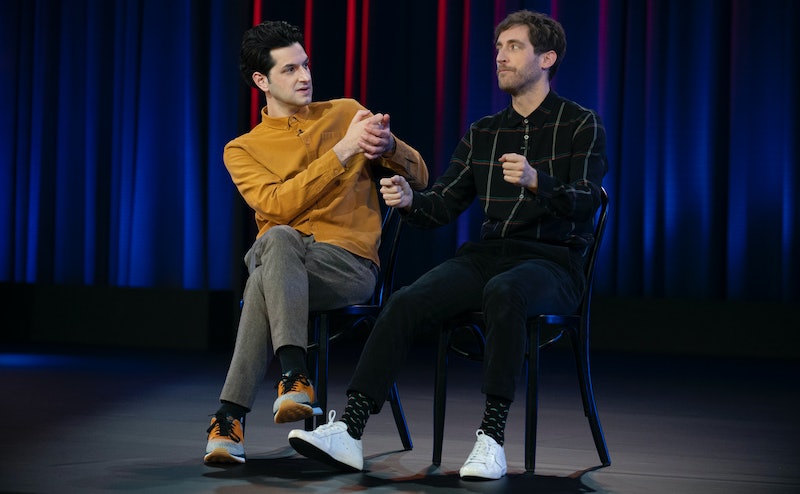 Thomas Middleditch and Ben Schwartz have been performing together for 12 years. This well-worn dynamic is perhaps what makes their Netflix improv comedy special, Middleditch & Schwartz, so successful. Throughout its three, hour-long episodes, the comedy duo break character to admit they can't remember specific details they'd nailed down just minutes prior. At one point, Schwartz relishes in predicting that he will beat his partner at Rock Paper Scissors (which he does, for the record).

This comfortability only comes with practice. According to Vox, the pair met in New York after doing comedy separately (Schwartz at UCB in New York and Middleditch in Chicago), and their senses of humor clicked. Schwartz told Vox jokingly that he was born with half of a smiley face amulet around his neck, and when he met Middleditch, he discovered the other half around his neck. "We hugged, it clashed and turned into one full happy face," the Sonic the Hedgehog voice actor said.

They're so comfortable with each other, in fact, that during Middleditch & Schwartz, they act out gazelles about to... consummate their relationship, make "doody" noises with their mouths, and call each other out on some of their less-than-accurate accents. "I'm sort of turning Werner Herzog now," Middleditch comments as his accent acquires a German lilt in Episode 2. "Bounty hunting is a complicated profession."

And since it's just two of them acting out what often turns into a cast of characters (a whole wedding party, in one case), they often lose the thread of the story and forget character names, which the other typically points out, despite the fact that they're dropping the facade.

"What I like about what Ben and I have allowed ourselves to do is just break the fourth wall whenever we want," Middleditch told The Hollywood Reporter. "If things are getting crazy with character counts or with what is happening in the show, either one of us as the character or one of us as us is going to be like, 'Hold on, let's recap.'" The two men do just this in their Law School sketch in Episode 2, when they portray an entire classroom of law students (and an alien, whose voice Schwartz pulls off with panache).

In addition to helping the two comedians review everything they've done so far in the sketch, this fourth-wall-recapping gets the audience involved, according to the Silicon Valley actor. "Sometimes they're like, 'Oh, you forgot someone!'" Middleditch told THR. "And then we're like, 'Oh no, we forgot someone!' It's part of the fun. Keeping it loose, I think, is a good time."

In Episode 3, Middleditch confesses that the character he's playing, a Lorne Michaels prototype named Timothy III, makes him "nervous." He continues, saying, "I'm worried about it being too real." To remedy the situation, he and Schwartz give Timothy webbed feet and a cat farm, which placates both performers and allows them to get back into character.

Then, toward the end of the third episode, characters Kyle and Sawson switch bodies. Middleditch cannot wrap his mind around the ramifications of this body swap, and he and Schwartz spend about five minutes talking it through as themselves while the audiences calls out any mistakes or remaining loose threads. Their dynamic feels shaggier than other improv performances, but their rapport is so lived-in that their near-constant character breaks make the sketches even funnier.

Above making for a more entertaining show, however, their casual banter also reveals a deep sense of trust in each other. "Whatever we throw at each other, we know the other person can handle," Schwartz told Vox. "That's a huge part of it all, because you can be the funniest person in the world, but if you're not a teammate and you're not a good partner on stage, then the shows won't ever really work." Fortunately, they are, and fortunately, they do.