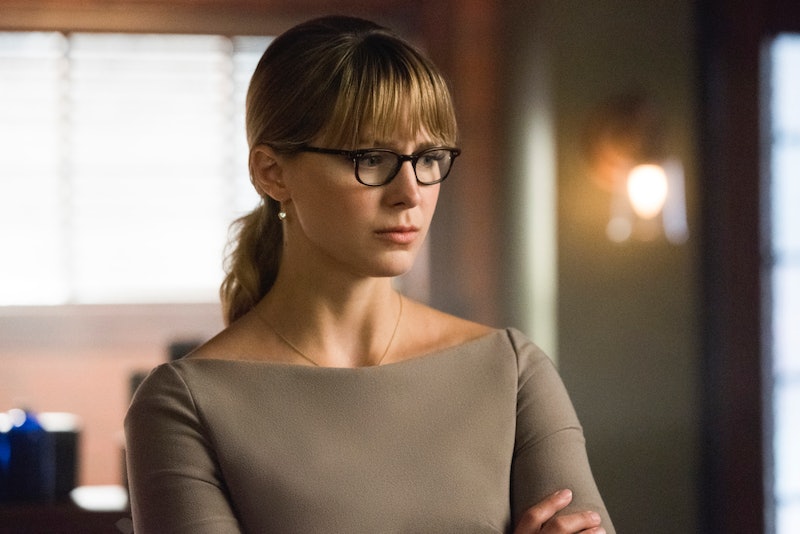 If Supergirl's new villain Midnight (spelled "M1dn1ght" in DC comics) is anything like the original character, Kara could be in for a big betrayal in Season 5. The character, played be Jennifer Cheon, is described by Variety as "the physical manifestation of darkness." When Midnight arrives on Supergirl, she has apparently just been released from an otherworldly prison, and is now out to "enact revenge against the person who put her there."

That's nothing new for the Supergirl team. They've been dealing with Fort Rozz escapees who have a vendetta against Kara's mother since Season 1. The potential difference between this character and the convicts they've faced before lies in Midnight's comic book origin story.

There's actually more than one character that has this name in the DC universe, but Supergirl's new Big Bad is not David "Midnight" Clark, a Midwestern vigilante who wears a fedora and joined a superhero team-up during World War II. This is M1dn1ght, a computer code who comes to life sort of like a robot. She's a relatively new character, too; Midnight first appeared in an arc of the Superwoman comics called "The Midnight Hour," written by Kate Perkins and Sami Basri, between 2017 and 2018.

In the comics, the M1dn1ght code was programmed by Lena Luthor to free Lena from an intergalactic prison, but was then accidentally brought to life by Lana Lang (also known as Supergirl). When that happened, in an arc straight out of Westworld, Midnight had an existential crisis about whether or not she would exist after serving her code's purpose, and therefore decided to take her destiny into her own figurative hands. She self-actualized herself from code, and in search of a body, went on a kidnapping spree in Metropolis, ultimately possessing Superwoman before she was defeated.

The biggest and most obvious difference between the comics and the CW series is the protagonist — Midnight will be facing Kara, not Lana. The rest of the story could fairly easily translate to the show, though. It all depends on who locked up Midnight, since that's her target. What if Lena tells Midnight that Kara is the one responsible for locking her up, and sends her own code after her BFF?

"I trust in technology," Lena says in the trailer for Season 5. "Not people. Not anymore." Notice how everyone's eyes glow after being possessed by their devices — including Lena's? That might also be the work of Midnight, or Midnight and Lena together. Instead of kidnapping, they could be gunning for city-wide domination in another, quieter way that feeds into our technological fears. Supergirl is already filled with supervillains — in order to up the ante, an evil Siri is apparently the next step.

In the trailer, Lena promises to make Kara hurt. She also punches Kara in the face, so you know that they're not in a good place. If Midnight's comics story proves to be true in Supergirl's version of events, Kara and Lena will only be driven further apart.