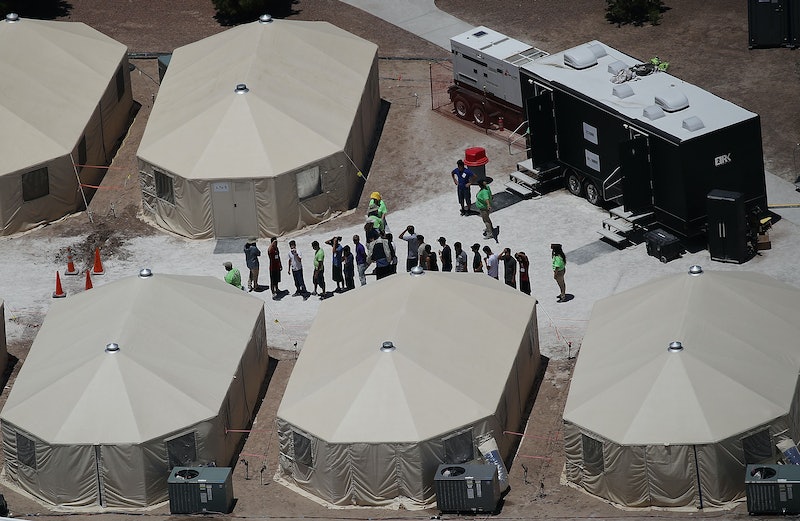 On Tuesday, the Trump administration announced it is easing the policy blamed for the ballooning number of kids in immigration detention — nearly 15,000 kids are now in U.S. custody, most of whom came to the country alone. In June, Trump officials began requiring all adult members of a parent or sponsor's household to be fingerprinted and undergo a background check before kids could go live with them. Easing that Trump policy will quicken the release of unaccompanied minors to family and other sponsors in the United States.

Fingerprints and background checks will now only be required of the adult who is sponsoring the child, often a parent or other relative. The Department of Health and Human Services announced the change. Its Office of Refugee Resettlement is in charge of overseeing the children in custody, and its shelters were at or beyond capacity.

The assistant secretary of the Department of Health and Human Services, Lynn Johnson, told NPR on Tuesday that the policy was "not adding anything to the protection or the safety of children." She all but admitted the move was a mistake. "The children should be home with their parents," Johnson said. "The government makes lousy parents."

The government will still check public records of all adults living in sponsor households, but this will not slow down the process as much. Johnson said as many as 2,000 children will be released in the coming days; their sponsors have already been checked out.

In addition to taking longer for the government to process sponsorship applications, the fingerprinting and background checks of potential sponsors led some family members to hesitate in making the application in the first place.

The information was run through not just state and FBI criminal databases but was also shared with the Department of Homeland Security and run through Immigration and Customs Enforcement (ICE) records, which would flag immigration violations. When the policy was announced, many immigration advocates said parents might not come forward for fear of arrest and deportation.

Those fears were largely proven true by administration actions. Last week, ICE said it had arrested 170 immigrants between June and November who had come forward to sponsor a child. A large majority of those arrested had no criminal record, but nearly 80 percent of those screened did not have legal status in the country, the agency said.

That could remain an impediment to some children's release. The policy remains stricter than under Obama or the first year of the Trump administration. Before the June announcement, parents were not typically fingerprinted — only sponsors who were other relatives or family friends were made to undergo that additional check, and it was checked against an FBI database. The background check did apply to all sponsors but no immigration data was shared with ICE.

Democratic Rep. Rosa DeLauro of Connecticut condemned the remaining facets of the policy in a statement to Texas Monthly. "The heart of this harmful policy is still in place," DeLauro said. "HHS should focus on providing the best care for these children, not be used as an immigration enforcement tool by fingerprinting sponsors when there are no red flags and then sharing that information with ICE. This process endangers children and will perpetuate their detention in HHS shelters."

The news of the reversal comes on the heels of several Democratic representatives touring a child detention facility in Tornillo, Texas, last week. ABC News reported that the company that runs the facility, BCFS Health and Human Services, has refused to take any government contracts past Jan. 1, which means the facility will likely close.

Plenty of work remains to get unaccompanied minors out of custody and home to their parents. The total number has risen from about 3,000 at the start of Trump's presidency to almost 15,000.