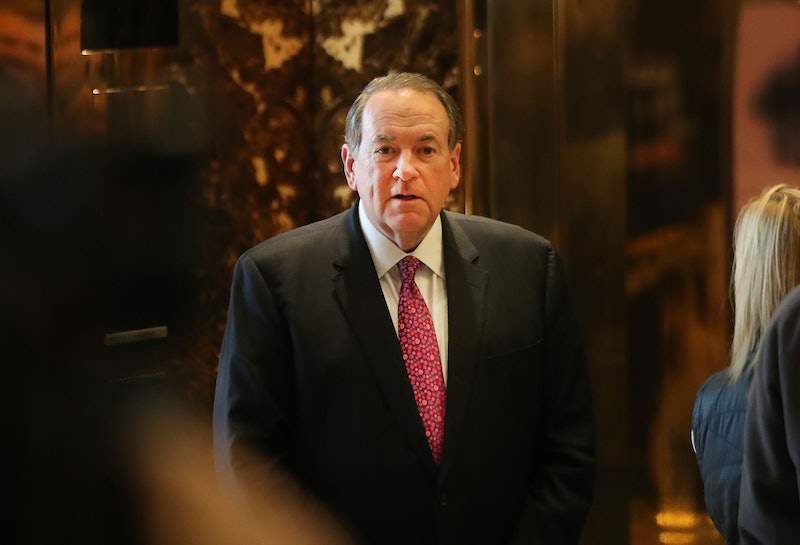 On Thursday, during a segment on Fox News, former Arkansas governor Mike Huckabee compared Confederate monuments to Planned Parenthood clinics in a rough analogy that ultimately sought to denounce anarchy. The 61-year-old claimed the recent removal of Confederate statues is "a matter of having a select group of people tear something down because it offends them personally," and hearkened it to him tearing down Planned Parenthood clinics.

To contextualize his comment — last weekend, thousands of white supremacists marched on Charlottesville, VA to protest the city's decision to remove a statue of Confederate Gen. Robert E. Lee. The rally, which featured white supremacists carrying torches while chanting "white lives matter" and "the Jews will not replace us," erupted in violence that eventually left 32-year-old anti-racist protester Heather Heyer dead.

In the week following Charlottesville, 13 Confederate monuments have been removed either by city officials, or protesters -- and even more are currently being considered for removal across the nation. So, Huckabee's commentary about anarchy, and his expression of disapproval against the methods of removal are in direct response to the events of the past week.

"Where does it stop? Look, I'm okay if we want to go through the process of public meetings and city officials taking the statues down. What we can't do, is have anarchists go tear down the statues because they're impatient with politicians doing it," Huckabee told America's Newsroom host Bill Hemmer on Thursday. "That's not acceptable behavior, that's vandalism, it's anarchy, and it would be like me saying I don't like abortion clinics -- so I'm just going to go tear them down because I find them offensive. Nobody would justify that, including me, that's what I think we're coming to. It's not a matter of reinterpreting our history, it's a matter of having a select group of people tear something down because it offends them personally."

While his intended objective was to say the removal of any institution or statue should go through the state, the false equivalence drawn between Planned Parenthood and Confederate monuments speak volumes.

On a basic level -- comparing health care clinics to the statues of Generals who owned slaves, fought for the right to own slaves, and believed that human beings should be owned, is a false equivalence right off the bat.

Perhaps, if there were statues of Planned Parenthood founders, Huckabee could draw a parallel, rather than comparing vandalism to destroying an institution that provides health care to nearly 5 million women, men and children every year.

Also, the current administration is already hard at work attempting to repeal and replace Obamacare and defund Planned Parenthood for a year. On the contrary, Confederate statues have remained intact since after the Civil War ended, some of which were constructed during the Jim Crow Era with the sole intention of intimidating black people and glorifying Confederate veterans.

Needless to say, this isn't a matter of comparing apples and oranges, but the comparison between glorifying a brutal history of violence and enslavement and an overly politicized health care provider.

Anti-choice people forced to pass Planned Parenthood clinics on their commute aren't forced to stare into the wistful eyes of a monument extolling a 400 + year history of oppression, rape, genocide and racism. It could also be noted that Planned Parenthood clinics didn't spark a rally last weekend that left a peaceful protester dead, and 20-year-old DeAndre Harris beaten by white supremacists while cops stood by.

Without question, Huckabee wasn't intending for journalists to dive into the semantics of his analogy. However, when the semantics involve comparing personal political preferences to statues glorifying slavery, then well, dare I say, they deserve a dive.