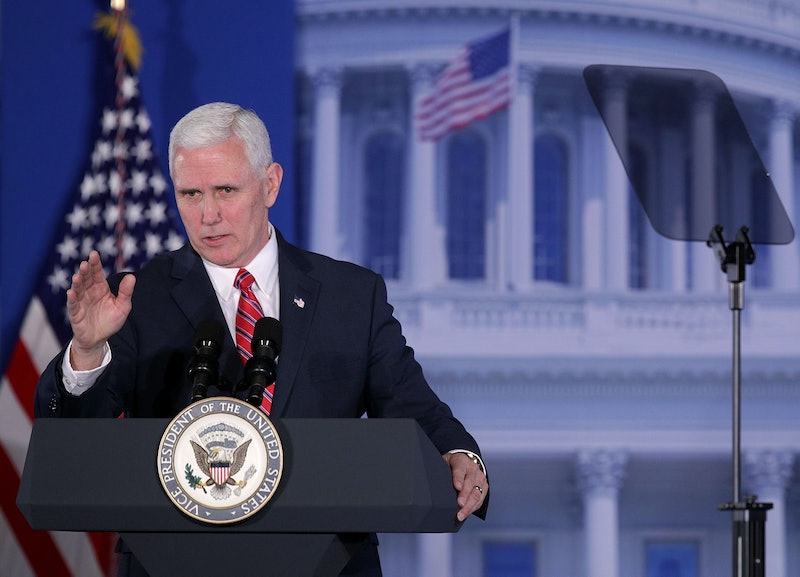 President Donald Trump is "pro-life," or anti-choice, as per his own words and actions on many occasions. And Mike Pence is reaffirming the Trump administration's anti-reproductive rights stance. That's right, Trump's vice president will speak on Jan. 27 at the March for Life, an annual anti-abortion march in Washington, D.C.

Pence will be the first vice president or president to speak at the March, though former President George W. Bush called into the March in 2008, and President Ronald Reagan made a video for the March in 1988, the Washington Post reported. And Pence won't be the only member of the Trump administration to speak at the event; Kellyanne Conway, Trump's counselor, is also on the list of March speakers.

March for Life's president, Jeanna Mancini, told NBC News that Pence has been "a friend and champion of the pro-life cause his entire career." And she's not wrong. As Indiana's governor, Pence passed what he called a "comprehensive pro-life measure" that barred people from seeking abortions because of fetal abnormalities, such as disabilities, CNN reported. Even worse, Pence's bill further discouraged doctors from performing abortions, as they could be held liable for "wrongful death" if an investigation found they had aborted a baby based on its race, disability, or gender, according to the International Business Times.

When it comes to Planned Parenthood, Pence has made it clear on several occasions that he is aligned with the Trump administration's goals of defunding the organization. "If Planned Parenthood wants to be involved in providing counseling services and HIV testing, they ought not to be in the business of providing abortions," he told Politico in 2011. "As long as they aspire to do that, I'll be after them." And come after Planned Parenthood he has. By 2014, Indiana had cut Planned Parenthood's funding to half of its 2005 levels, the International Business Times reported.

Pence, a self-described evangelical Christian, can't seem to understand the concept of the separation of church and state. Just because he himself is opposed to abortion for religious reasons, it doesn't mean he should be able to outlaw abortion for everyone else. This is especially true, since he and Trump have discussed expanding "religious freedom" with evangelical leaders, Vox reported. And expanding religious freedom for one group shouldn't mean taking away another group's beliefs in reproductive freedom. After all, people who are morally or religiously opposed to abortions aren't being forced to get one. But if the Trump administration succeeds in outlawing abortion, all women will likely be forced to carry their pregnancies to term.

Trump seems pretty certain that more people will show up to Friday's March for Life than people did for the Women's March on Washington. During a Philadelphia retreat, the president allegedly told Republican members of Congress that "the press never gives [the March for Life] the credit they deserve," Politico reported. "They'll have 300, 400, 500, 600,000 people. You won't even read about it."