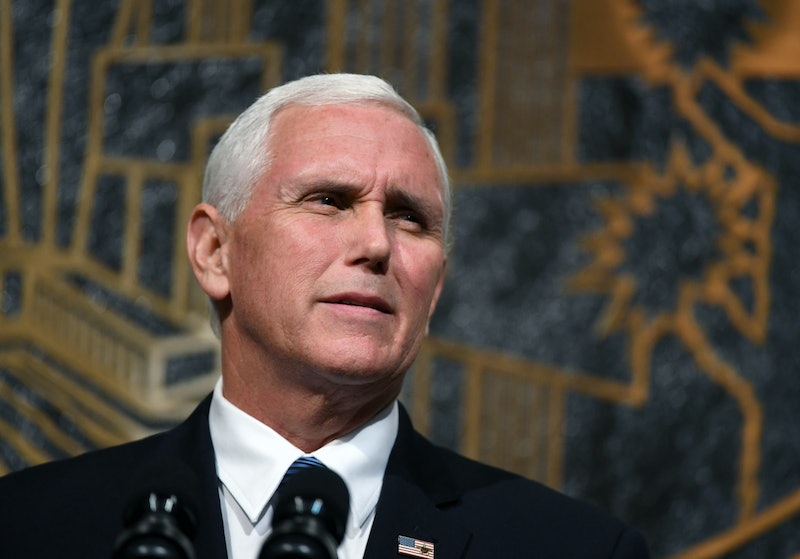 Vice President Mike Pence objected to NFL players' kneeling during the national anthem by leaving Sunday's football game between the Indianapolis Colts and the San Francisco 49ers early. Pence explained his departure from the game on Twitter, where he also shared a photo of himself standing for the national anthem. "I stand with POTUS Trump, I stand with our soldiers, and I will always stand for our Flag and our National Anthem," Pence tweeted.

Pence attended Sunday's game in Indianapolis with his wife, Karen. The couple was likely there to show some love to their home state of Indiana. Before assuming the vice presidency, Pence served as governor of Indiana.

For their part, the Colts have allowed players to kneel. The team leadership announced last week that players would be permitted to honor the national anthem however they choose. "Some of our players may kneel, while others may stand," the statement read. "But this is just the beginning. There is much work to do, and it will take all of us."

Meanwhile, the 49ers have in many ways led the kneeling trend. Last year, then-49ers quarterback Colin Kaepernick started the protest by refusing to stand during the playing of the national anthem. Kaepernick doesn't currently have an NFL team, but his 49ers have continued to kneel during the national anthem. Last week, many 49ers took a knee, while those who didn't stood behind the kneelers in solidarity. They took the same formation before Sunday's game in Indianapolis.

Trump himself addressed Pence's decision to leave the game after the national anthem. In a tweet on Sunday, Trump said that he asked the vice president to leave the game if players kneeled. Clearly, Pence obliged.

The vice president's departure from the Colts-49ers game on Sunday made instant headlines. Players' decision to kneel for the national anthem has divided Americans for several weeks. It's no surprise, then, that Pence's newsworthy departure from Indianapolis' Lucas Oil Stadium quickly made its way to social media. Reactions were mixed, but some were certainly more light-hearted than others.

According to CNN, the NFL declined to comment on Pence's decision to leave the Colts-49ers game. Last month, the NFL held a meeting with NFL Commissioner Roger Gooddell, eight players, and more than half of team owners to discuss the social issues that have played a role in the national anthem protests. According to NFL.com, the dialogue was described by participants as "a very positive experience" and "a step in the right direction." While NFL players and officials continue to hash things out within the league, Pence's decision to leave Sunday's game in Indianapolis early put the controversy back in the public spotlight for another weekend.