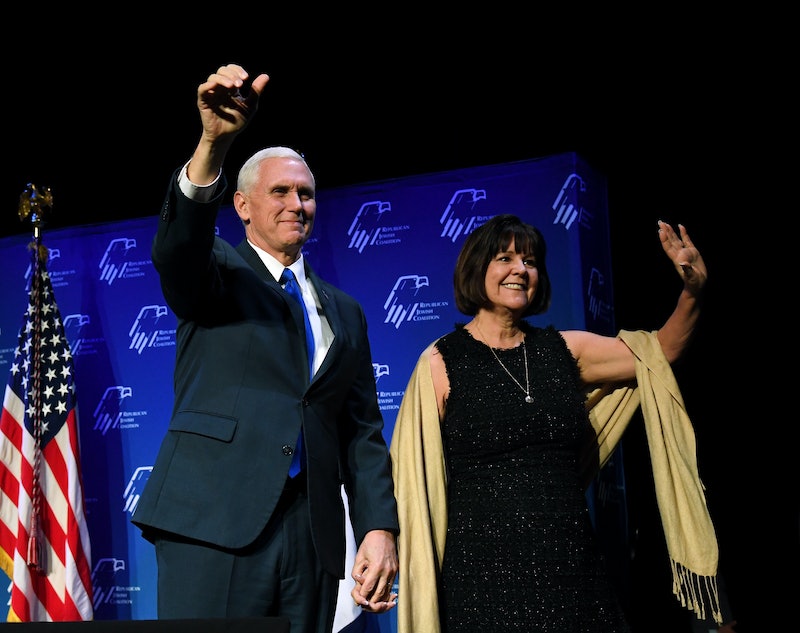 Fifteen years ago, Mike Pence told The Hill that he never dines with another woman unless it's his wife, Karen Pence. He went on to say that he wouldn't go to events where alcohol was served unless his wife accompanied him. This practice bears resemblance to Billy Graham's similar puritanical creed. Dubbed the "Billy Graham Rule," it calls for no extensive socializing with a woman outside of marriage. Pence not eating with women other than his wife is a leaf from that school of thought.

This tidbit surfaced in a political profile on Pence's wife published in the Washington Post, and has sparked a debate across the internet. Pence's perceived loyalty to his wife gives us a glimpse into how he views socializing with women — back then, Graham's reasoning for not dining or drinking alone with women was that he did not want to create circumstances that would lead to an extramarital tryst. After all, a common evangelical belief is that men and women are prone to commit sin if left to their devices, and in 1994, in a statement to the Indianapolis Business Journal, Pence said he was a "born-again, evangelical Catholic."

As far as the right to personal convictions — no matter how disagreeable they are to others — is concerned, it's no one's business if you believe this in the private realm of your life. But when you are the vice president of the most powerful country on earth, your views on marriage (among other subjects) can potentially influence the way an entire nation thinks about these issues and acts upon them. Based on the magnitude of Pence's position in the American political landscape and his impact on the American people, this practice based in misogyny — viewing women as pending cases of temptation — is concerning, to say the least.

Pence's belief implies several disturbing things. Firstly, it insinuates the archaic idea that men lack the self-control needed to conduct basic exchanges with members of the opposite sex. Such a practice tells people that if left on his own with a woman who is not his wife, a man will desecrate his commitment to his partner because "he cannot help himself."

Secondly, and more dangerously, it perpetuates the myth that women are de facto seductresses and should not be allowed to interact with married men, lest they lure them into the traps of carnal sin. This belief places the onus of responsibility on women by saying, "Because men can't control themselves, you are responsible for whatever happens." It frames women as potential "homewreckers" who can't keep their hands off a married man.

It's an embarrassingly close-minded and baseless belief that hurts women by positing them as inherently amoral. Now this misogynistic myth is parading in the White House.

What is Pence telling the average American when he refuses to interact with a peer of the opposite sex outside of his marriage? It comes down to rudimentary issues based in professionalism.

In a world where the workforce — whether you are the vice president or an office clerk — contains both men and women, it is almost inevitable that you might have to have a professional lunch or dinner with your female colleague. You might even have to travel with her.

When Pence refuses to eat with women other than his wife, he is telling the average American that it is virtually impossible to interact with members of the opposite sex and not become riddled with sexual attraction. Worse, he is telling them that any interaction between a man and another woman who is not his wife is suspicious. Something as innocuous as having lunch or talking over drinks instantly becomes questionable under such a practice.

It is worth asking, then: Is Pence able to see women as peers and not potential betrayals to his marriage? How does he conduct business with the women he works with? Is there no woman in his party that he must maintain consistent contact with in order to run governmental affairs? If we reversed the same situation, how would the public react to a female political figure refusing to dine with male peers? There is a strong likelihood that the same people praising Pence today would call such a woman incompetent.

People who have tried to defend Pence say that he is protecting the sanctity of his marriage by avoiding possible conditions that could cause a fracture in his relationship with his wife. And that is a decision between Pence and his spouse, but it is worth remembering one simple fact. Pence is the second-most-powerful man in the United States of America. He is, it is worth constantly repeating, the vice president of hundreds of millions of Americans, and one of the basic requisites of his job demands interacting with female colleagues to share notes on governance and more. If he cannot execute such such a core expectation of his job, one may think his competency is uncertain.

And ultimately, and perhaps most critically, how he views marriage and women carries the potential to shape and possibly distort the views of the massive population he presides over as the vice president.

More like this
Kim Kardashian & Pete Davidson’s Relationship Timeline From Start To Finish
By Jordyn Tilchen and Bustle Editors
Khloé Kardashian Is Reportedly Dating A Private Equity Investor She Met Through Kim
By Jordyn Tilchen
Kendall Jenner & Devin Booker Have Seemingly Reconciled Just Weeks After Split
By Jordyn Tilchen
We’ve All Had Bad Sex. Nona Willis Aronowitz Is Talking About It.
By Sophia Benoit
Get Even More From Bustle — Sign Up For The Newsletter