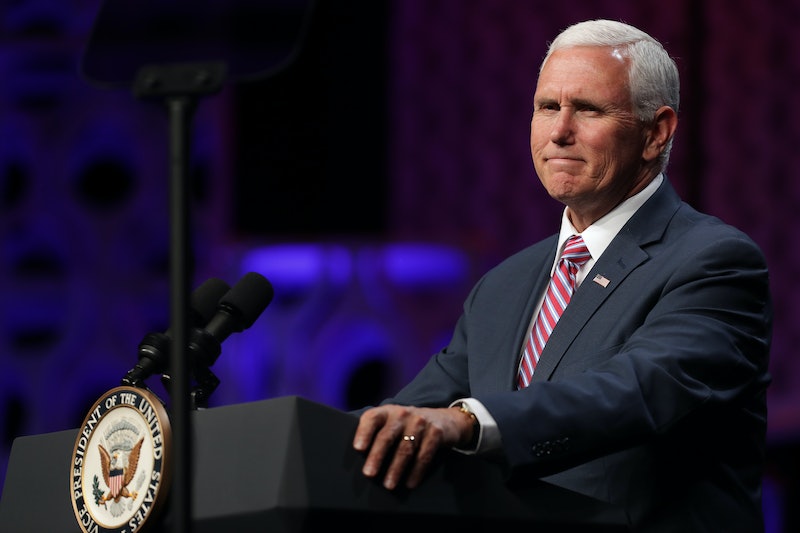 While delivering the commencement address at Liberty University's 2019 graduation ceremony on Saturday, Vice President Mike Pence warned graduates they'd be "shunned" for being Christian. As the 2020 election heats up, Pence's anti-abortion and anti-LGBTQ+ religious views have come under fire from a variety of sources, including openly-gay 2020 Democratic presidential candidate Pete Buttigieg.

"Throughout most of American history, it's been pretty easy to call yourself Christian," Pence told Liberty University's graduating class of 2019. "It didn't even occur to people that you might be shunned or ridiculed for defending the teachings of the Bible."

"But things are different now," he continued. "Some of the loudest voices for tolerance today have little tolerance for traditional Christian beliefs. So as you go about your daily life, be ready." The vice president claimed that "we live in a time when it's become acceptable and even fashionable to ridicule and even discriminate against people of faith."

In an attempt to illustrate the types of attacks Christians should prepare themselves for, Pence cited the criticism he and his wife endured when she returned to teaching at a Virginia school that openly discriminates against the LGBTQ+ community. In January, NBC News reported that Karen Pence was returning to her teaching position at Immanuel Christian School, an elementary school that not only requires employees sign a statement noting they "understand" that marriage has "only one meaning: the uniting of one man and one woman,” but also bars LGBTQ+ people from either attending or working at the school.

"These attacks on Christian education are un-American," the vice president told students at Saturday's commencement ceremony.

Between boasting about how great the economy was doing and how President Donald Trump had brought jobs back, Pence cautioned graduates about the persecution he was certain they'd face. "The truth is we live in a time when the freedom of religion is under assault," he said. "Yesterday I was informed by the U.S. Commission on International Religious Freedom that, today, christians suffer more persecution around the world than any other religion."

That being said, Pence touted the Trump administration as a warrior working to protect religious liberty. "You are entering an America where you have a president and an administration that are standing strong for all the liberties we cherish," Pence said, listing both freedom of speech and freedom of religion. "And we stand without apology for the sanctity of human life."

On Saturday, the vice president went on to promise Liberty University graduates that the Trump administration would "always stand up for the right of Americans to live, to learn, and to worship God according to the dictates of their conscience."