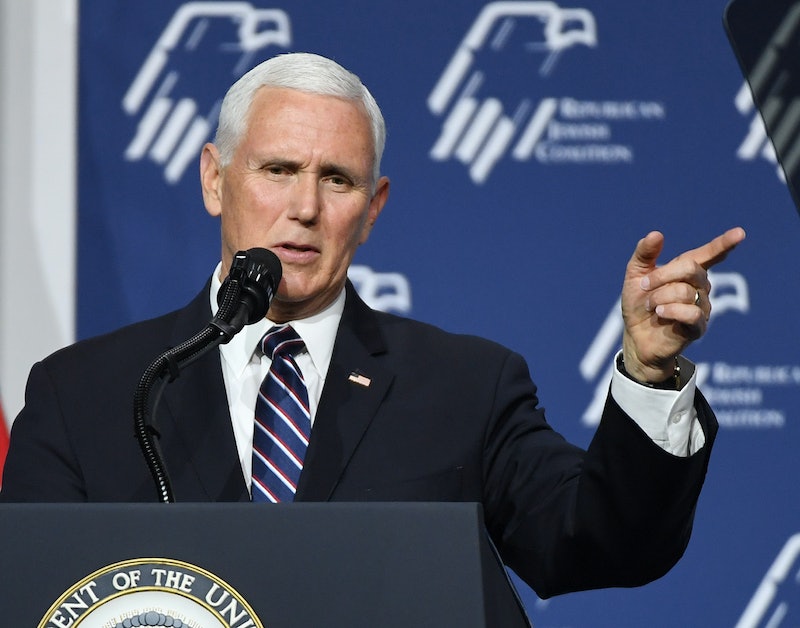 Try as he might, CNN's Jake Tapper couldn't get a straight answer out of Vice President Mike Pence on Sunday's State of the Union. Pence dodged a question on climate change repeatedly, refusing to say whether or not he thought it was a threat to the country despite persistent questioning.

"Well, what I will tell you is that we'll always follow the science on that in this administration," Pence said when asked by Tapper if he thought "human-induced climate emergency" was a threat to the country.

"The science says it is," Tapper cut in.

Pence appeared to disregard Tapper's remark. Instead, the vice president proceeded to promise that the Trump administration wouldn't take part in "hamstringing energy" and "raising the cost of utility rates for working families" as he argued the Obama administration had done through its Clean Power Plan.

"The truth of the matter is, with the advent of natural gas, with the natural gas explosion that's developing, with clean coal technology, we're seeing a significant reduction in carbon emissions all across this country," Pence went on to say.

Still Tapper persisted. "But is what people are calling a climate emergency a threat? Do you think it is a threat?" he pressed.

"I think the answer to that is going to be based upon the science," Pence responded, again demurring from providing his own opinion. The vice president then appeared unconvinced, letting loose a drawn out "well" when Tapper informed him that "the science says yes."

"There's many in the science that—" Pence began before Tapper quickly cut him off.

"The science community in your own administration, at NOAA, at the DNI, they all say it is a threat," the CNN host said, referring to the National Oceanic and Atmospheric Administration and the Director of National Intelligence. "But you won't, for some reason."

Pence then appeared to return to his criticism of the Obama administration and the Clean Power Plan, which the Trump administration recently rolled back in an effort to reduce restrictions on coal-fired power stations' carbon dioxide admissions. "What we've said is that we're not going to raise utility rates," Pence said. "Remember what Obama said? He had his climate change plan, he said it's necessarily going to cause utility rates to skyrocket and that would force us into these green technologies." The vice president then proceeded to criticize Democrats' Green New Deal, arguing that it would "break" the economy.

"So you don't think it's a threat is all I'm saying," Tapper asked for at least the fourth time.

Pence responded by saying he thought "we were making great progress reducing carbon emissions" and that "America has the cleanest air and water in the world," a statement Tapper immediately challenged.

"We don't have the cleanest air and water in the world. We don't. You get back to me with statistics to show it," Tapper countered before giving up his quest to learn Pence's thoughts on climate change and steering the conversation toward Russia.

It's worth noting that this isn't the first time Pence has appeared to dodge questions regarding his climate change beliefs. In a 2014 interview with NBC's Chuck Todd, for example, Pence said he didn't think the question of whether climate change was a man-made issue was a "resolved issue" in the science community.

"Just a few years ago we were talking about global warming, which we haven't seen a lot of warming lately," he said, adding that he remembered talk of a "coming ice age" happening in the '70s. Pence appeared to cite the "tough winter" Indiana had recently had as evidence against global warming. "We've seen these kind of winters before and we'll shoulder through them," he said. "We'll leave the scientific debates for the future."