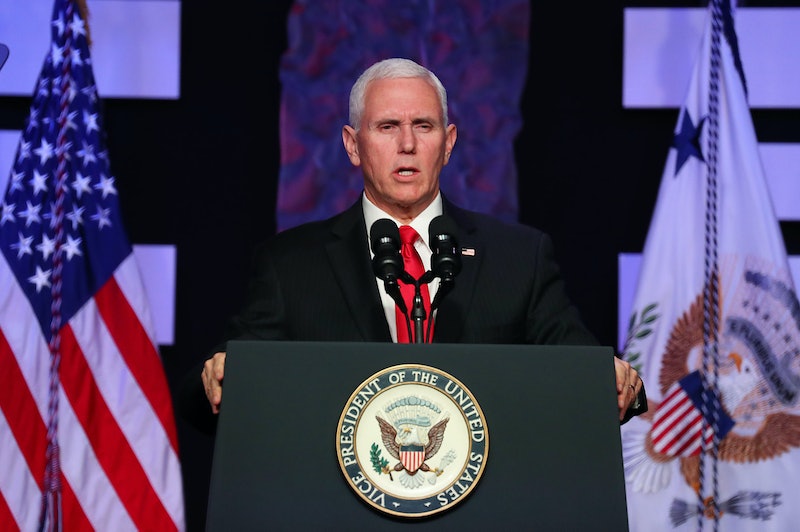 The vice president of the United States holds a unique position of power as both the president of the Senate and the next in line to the presidency. Notably, though, it seems like some Americans aren't sure who occupies this office. Indeed, Mike Pence's 2019 approval rating shows that over ten percent of people surveyed have "never heard of" him, CNN reported.

SSRS, a research company, conducted a phone survey for CNN to examine Americans' opinions about the federal government. The survey was carried out from Jan. 30 - Feb. 2, 2019 and featured responses from 1,011 people. One of the survey questions asked that respondents provide their opinion of Pence and indicated that they could select from four options: Favorable opinion, unfavorable opinion, never heard of, or no opinion.

In responding to this question, 12 percent of those surveyed said that they had never heard of the vice president. As The Week described, when applying the findings of this survey to the overall American population, they suggest that 30,387,311 adults don't recognize the name of the current vice president.

The survey also revealed how Americans' awareness of Pence has changed over time. Polls conducted from Nov. 17-20, 2016 and Jan. 12-15, 2017 (after Trump and Pence's electoral victory, but before their inauguration) showed that, similarly, 12 percent of respondents during those time periods had never heard of Pence.

In four more follow-up CNN polls carried out during Trump's administration, an increased number of respondents indicated that they recognized the vice president's name, with nine and ten percent saying they had never heard of him, depending on the time period. Now, this most recent poll shows that, again, fewer Americans seem to know of Pence.

CNN's poll on Pence's approval rating seems to reflect similar trends found by Gallup in October 2018 — namely, that Pence's average net favorable rating, which factors in both favorable and unfavorable opinions, is typically higher than Trump's. However, this is not always the case with every presidential team. Gallup noted that there often seems to be little predictability when it comes to Americans' favorability opinion of vice presidents versus presidents.

Overall, CNN's most recent survey offered some striking insights into how Americans view Vice President Pence, both in comparison to Trump and independently. Throughout the remainder of Trump's term, it will be interesting to observe if and how the public's view of the vice president shifts over time.

More like this
Watch Jacinda Arden’s Devastatingly Honest Resignation Speech
By Sam Ramsden
Eurovision Has Been Given A Whole New Look Ahead Of Its Liverpool Debut
By Bustle UK
Man Meets Politics: ‘Boy Meets World’ Star Ben Savage Is Running For Congress
By Jake Viswanath
Pret & Costa’s Coffee Is The Strongest On The High Street, According To Which?
By Sam Ramsden
Get Even More From Bustle — Sign Up For The Newsletter
From hair trends to relationship advice, our daily newsletter has everything you need to sound like a person who’s on TikTok, even if you aren’t.