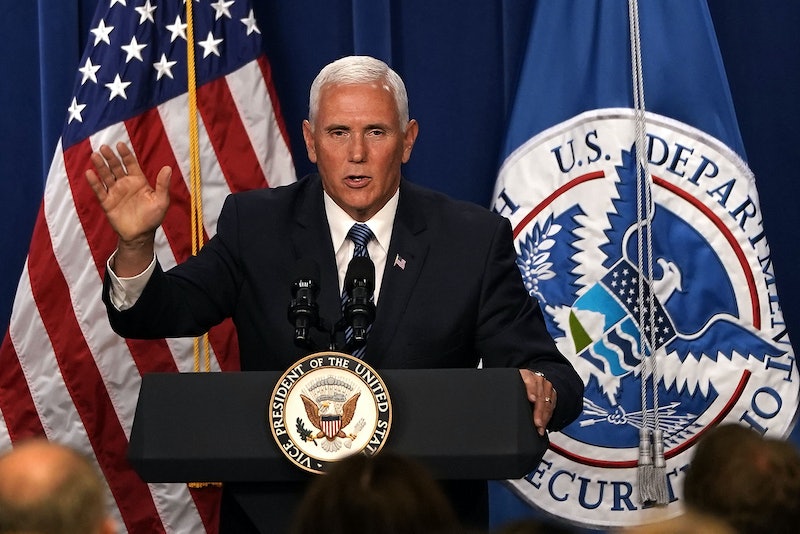 Following the announcement of President Trump's Supreme Court pick, the watershed case of Roe v. Wade found its way back into headlines. The Trump campaign had made it clear that it wanted the landmark '70s case overturned during the election, and on Tuesday, Vice President Mike Pence's comments on Brett Kavanaugh and Roe v. Wade show that hasn't changed. During a CNN interview, Pence said he's still set on seeing the historic ruling that legalized abortion nationwide dismantled, according to CNN.

Pence wouldn't say whether Kavanaugh, Trump's 53-year-old Supreme Court nominee, will comply with Trump's campaign promise. Kavanaugh has not publicly opposed Roe v. Wade, but women's rights activists are worried that abortion could become illegal if Kavanaugh is confirmed by the Senate.

"I stand for the sanctity of life. This administration, this President are pro-life, but what the American people ought to know is that, as the President said today, this is not an issue he discussed with Judge Kavanaugh, I didn't discuss it with him either," Pence said in an interview with CNN's Dana Bash when asked if he would be unhappy if Kavanaugh does have the chance to overturn Roe V. Wade and doesn't take it. After being asked if he still wants to see Roe v. Wade overturned, Pence replied, "I do, but I haven't been nominated to the Supreme Court."

During the interview, Pence defended the selection of Kavanaugh, whom he believes will behave like Justice Antonin Scalia, a strict Constitutional constructionist and conservative who passed away in 2016.

"President Trump set out to keep his word to the American people that he would nominate, once again, a justice to the Supreme Court who would faithfully interpret the Constitution as written, and when you look at the extraordinary body of work — more than 300 opinions — of Judge Brett Kavanaugh, you can see the kind of principled jurist who fits right in the model of a Justice Neil Gorsuch, a Justice Antonin Scalia," said Pence in the interview. "I think as people across the country who share the president's vision for the court come to see this good man and see that strong record, that they'll come to the same conclusion."

On Twitter, Pence praised Kavanaugh for his substantial body of work over the years, quoting himself from the interview.

Pence has been a consistent champion of anti-abortion laws. His views were clear during his time as a congressman, the governor of Indiana, and as vice president, according to The Hill. During the 2016 campaign, Pence said that he hoped to see the Roe v. Wade ruling end up on "the ash heap of history." His intentions echoed those of Trump, who predicted that the ruling would be done away with if he were to place anti-abortion rights justices to the Supreme Court, CNN reported.

In February of 2018 at a luncheon hosted by Susan B. Anthony List & Life Institute, an anti-abortion organization, Pence said, "I know in my heart of hearts this will be the generation that restores life in America. If all of us do all we can, we can once again, in our time, restore the sanctity of life to the center of American law."

Since Trump took office last year, the administration has made moves to chip away at abortion access. Trump has signed legislation flipping back a rule from Obama's term that prevented states from defunding Planned Parenthood. He's also resurrected a ban that stops federal funds from being used on global health programs that cover or promote abortions. Pence's views on abortion have long been cemented, and there's no question about what the administration wants. Now, it's a waiting game to see what Kavanaugh, if he's confirmed, will do about abortion laws in America.