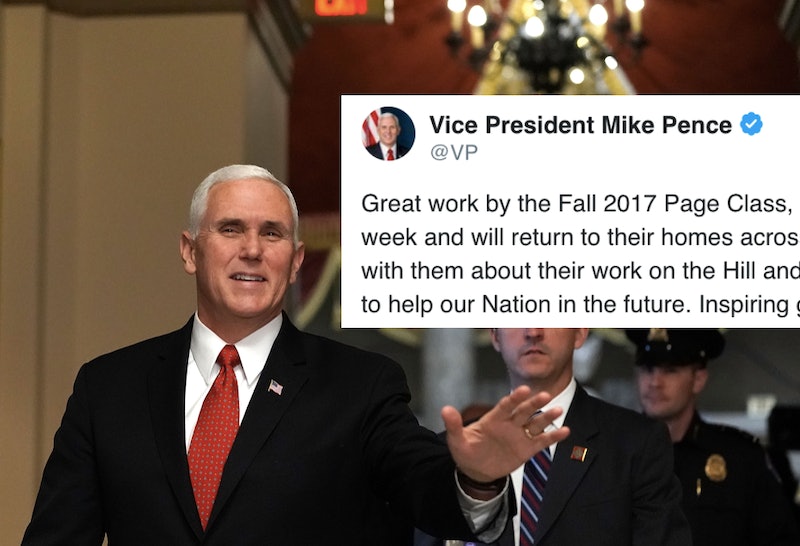 On Wednesday evening, Vice President Mike Pence tweeted a photo of White House interns from the Fall 2017 Page Class, according to his caption, in which he congratulated them. But Twitter users were quick to point out the glaring lack of diversity in this 25-person White House intern class. Bustle has reached out to the White House for a comment and will update accordingly.

Great work by the Fall 2017 Page Class, who graduate this week and will return to their homes across the country. Spoke with them about their work on the Hill and what they plan to do to help our Nation in the future. Inspiring group!

Many Twitter users, however, noticed that the intern class did not contain a single person of color.

This won't be the first time that a photo from Donald Trump's administration was criticized for failing to demonstrate racial inclusivity. In July, Trump's White House conducted a photo op of their summer interns. One Twitter user, Brandon Friedman, did the math then and noted that among the total of 115 interns, 81 were white men, 34 were women (a majority of whom were white), two were black men, and there were zero black women. The same criticism — of having little to no diversity — was leveled at Pence on Wednesday.

1. This Reaction To Pence

One Twitter user sought to use an analogy to criticize the photo.

For one social media user, the photo was simply full of "so much whiteness."

While Pence may have felt inspired by the class of interns, one user wasn't. "Everyone is white," Twitter user @raidersk11 said, "I am not inspired."

For some, sarcasm was the best way to let their disapproval be known. "Wow, look at all the diversity in that group!" Martin J. Keane exclaimed.

One Twitter user posed a question for Pence, "Wow so much diversity in that photo! Were the people of color off that day, or did they all go to the bathroom at the same time?"

7. A Question About #MAGA

Another Twitter user brought up Trump's slogan, Make America Great Again, and asked, "Now that’s what #MAGA is really about, isn’t it? Doesn’t get clearer (aka whiter) than this photo."

8. Some Diversity In There

Another Twitter user asked, "Why are all you people complaining about the lack of diversity in this photo? Don't you see all those shades of pale?"

Sometimes, modern-day criticism is best expressed through emojis. In this case, one Twitter used an eye-roll emoji to get his point across. "Shocking. Mostly white males. Great job on the 'diversity' managing to get some female interns too," he said.

Sometimes, a GIF of Phoebe from Friends helps. At least for this Twitter user.

Although expressing rage seems to be de rigueur on Twitter, some people just sought to make a request of Pence. "Mike," Twitter user Janie Garner wrote, "please choose the next group of interns with a balance of all races we have in the US. That will be a very fair way of staffing. Thanks."

For some, a GIF of Michael Scott snubbing poor Toby from The Office was one way to criticize Pence.

Another Twitter user simply said, "About as diverse as a surrender flag!"

While the group was "inspiring" to Pence, it's clear that many people thought it was the far opposite of uplifting.