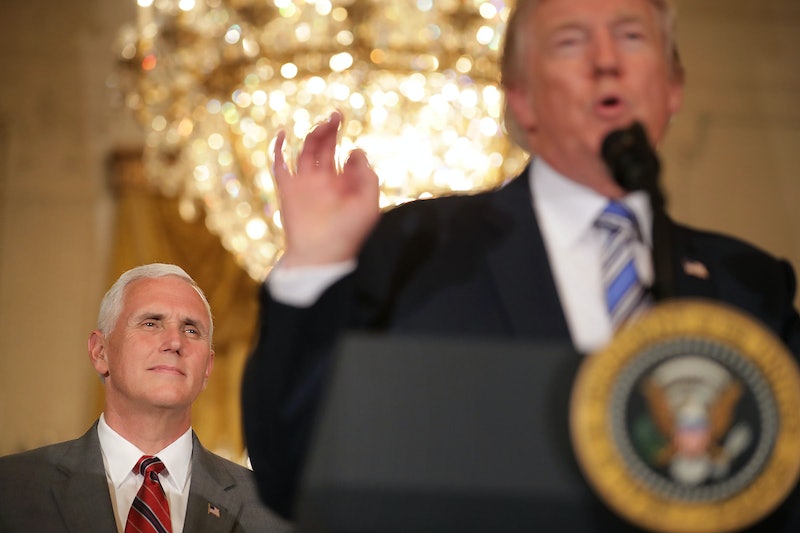 On Tuesday, it became clear that Senate Republicans didn't have the support they needed to pass their version of healthcare reform. Just months after Republicans celebrated their victory in the House of Representatives, they lamented the failure in the Senate. As senators dashed the GOP's hopes for healthcare reform, Trump and Pence's responses to the Senate's health care stagnation seemed to show a lack of unity in the White House.

Trump's response to the Senate's failure to pass healthcare reform contrasted with Pence's response, which called for further action. Speaking at an event elsewhere in Washington, D.C., Pence told Congress to "step up."

Trump's message seemed to encourage a more hands-off approach, whereas Pence, who previously served in Congress, seemed adamant that there was more for Congress to do. Despite the different tones, Pence did assure his audience that he and the president were united in supporting the Senate GOP's plan to repeal Obamacare first and work on a replacement later. "Obamacare has failed, and Obamacare must go," he reportedly said.

The president's "let Obamacare fail" mentality seemed to trouble some Americans on Tuesday. Democrat and Michigan Rep. Dan Kildee tweeted, "That isn't a plan or leadership," calling for the president to instead work with Democrats to improve the current healthcare law. Meanwhile, many others compared Trump's message to Marie Antionette's notorious line, "Let them eat cake."

Ultimately, no matter how you spin it, this week's healthcare downfall in the Republican-controlled Senate leaves Americans with a degree of uncertainty. Originally, Trump had intended for Obamacare to be repealed and replaced in his first 100 days in office. Now with roughly six months under his belt, the president and his administration are facing an uphill battle, as even the plan to repeal without replacing Obamacare is facing some tough opposition.