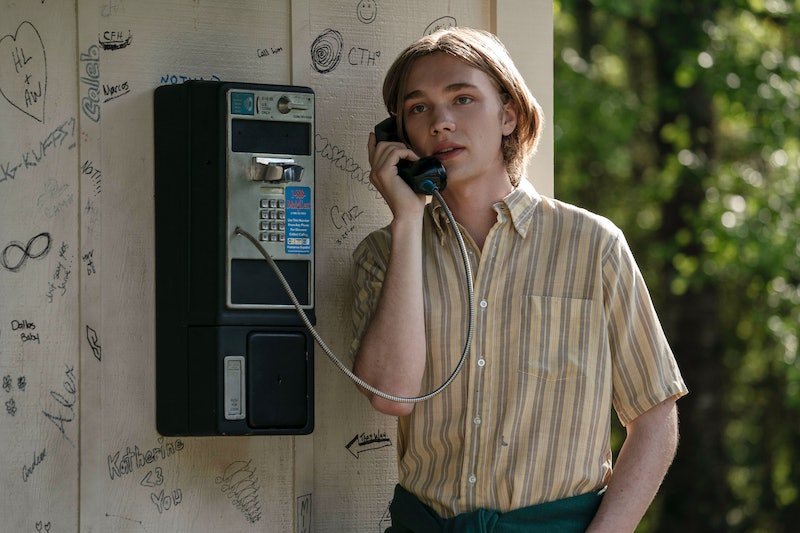 It's a good thing that Charlie Plummer is the one playing Miles (aka Pudge) on Looking for Alaska, because it's a character he knows quite well. At a BookCon panel for the show in June, Plummer said he first read the novel when he was 15, and that Miles' "passion to experience life" really spoke to him. It's exactly this passion that brings Miles to Culver Creek, a boarding school where he meets the beautiful but troubled Alaska: he's seeking the "great perhaps" poet Francois Rabelais mentioned in his last words.

In order to bring the character to life, Plummer said he relied on some of his own personal experiences as a teen, though as a young actor, those experiences may be a little different than Miles'. According to Plummer's IMDb page, the now 20-year-old has been acting since 2010. He appeared as Michael Thompson on the TV show Boardwalk Empire and played John Paul Getty III in the movie All the Money in the World. But Looking for Alaska is, by Plummer's own admission, his biggest role yet. "It's just been crazy," he told GQ magazine. "I've never done anything where anyone's cared about the project before it's come out."

Still, Plummer has been considered one of Hollywood's most promising new stars for quite some time. Ridley Scott compared him to a young Leonardo DiCaprio, and VMan magazine called him the "next-gen River Phoenix" — which is an apt comparison, considering River's brother Joaquin is Plummer's favorite actor. So much so that he tried to get a production assistant job on Joker just to meet him.

"Joaquin Phoenix is my favorite actor working today, and he's playing my favorite character in all of pop culture, and it's shooting in the city that I live in. How could I not be there?" Plummer told GQ. Unfortunately he didn't get the job, but nabbing the lead role in Looking for Alaska will likely do a lot more to further his acting career than being a PA — and certainly much more than a football management job would, which was another career path Plummer considered before committing to acting, he told VMan.

But even with a lead role in a major project and comparisons to River Phoenix and Leonardo DiCaprio, Plummer hasn't gotten complacent. "If you're like, 'Wow, man, I am the next f*cking Leo, let's f*cking go,' or you're like, ‘Oh, my God, I'll never be that, I'm such a fraud,' either way you're kind of in trouble," Plummer told GQ. "I'm making sure 100% of my focus is just on the work. Nothing is guaranteed, and all you've got is what's right in front of you."

Right now, what's in front of Plummer is the Oct. 18 release of Looking for Alaska on Hulu. And if he really is the next Leo or River, that's only the beginning.