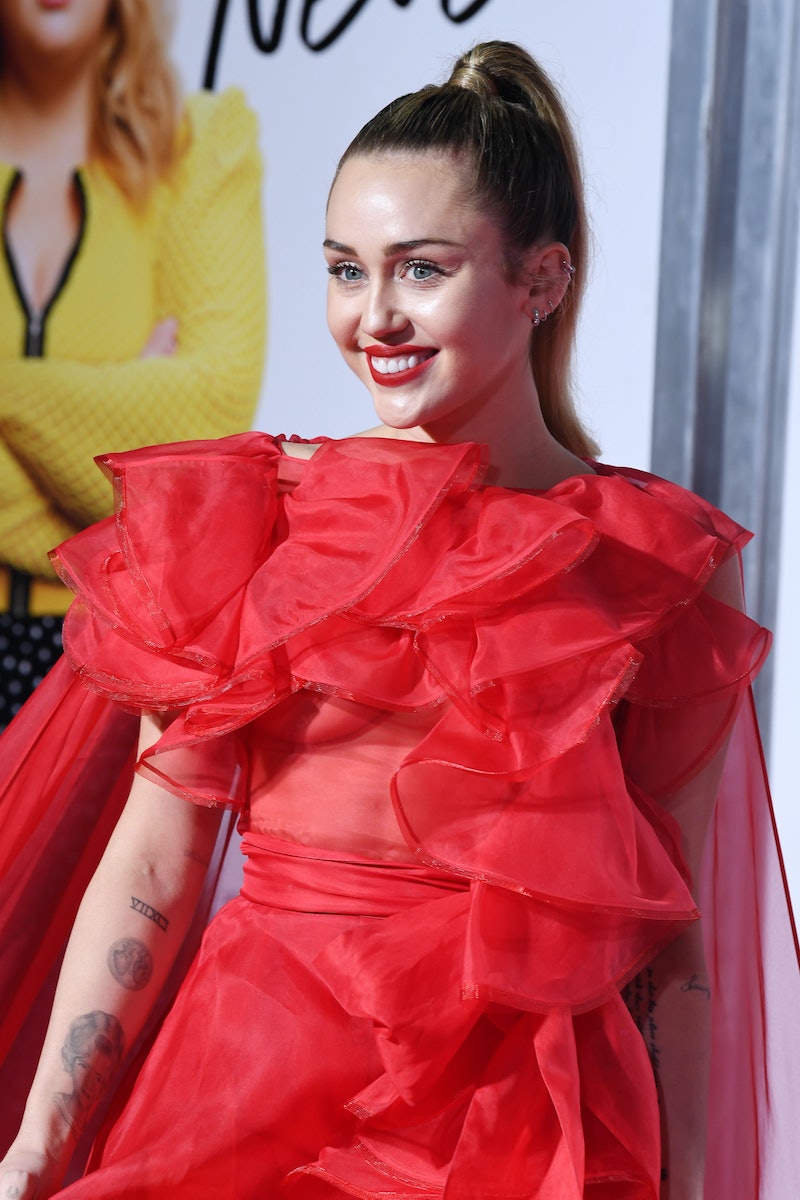 Marriage means being there for your spouse in sickness and in health, and this week, Miley Cyrus had the chance to step up for Liam Hemsworth when he needed her. On Monday night, Cyrus attended the Isn't It Romantic premiere on Hemsworth's behalf when he was sick, and she shared the news with fans with the sweetest tweet about the situation.

In the movie, which also stars Rebel Wilson and Adam DeVine, Hemsworth plays Blake, one of Wilson's character's love interests. Unfortunately, he wasn't able to make it to the premiere — according to what Wilson told USA Today, Hemsworth was in the hospital overnight, although it's not clear what he was suffering from. But Cyrus was there to step up and be there for him in his absence.

Sharing a photo of herself wearing a red Valentino gown on the red carpet at the premiere, Cyrus tweeted:

"So proud of my hunky hubby @liamhemsworth & his newest movie #IsntItRomantic. He unfortunately wasn’t able to attend due to health reasons... but he is recovering and taking this time to rest / heal. It’s hard for entertainers to put themselves before the project but this time it was crucial .... I am proud to represent him and his incredible work. So happy to see him shining in this comedy! He is the funniest person I know , and the world now gets to see the Liam I wake up to every day.... luckiest."

Later, Hemsworth took to Instagram to share a photo of Cyrus and Wilson on the red carpet, thanking his wife for representing him at the premiere. He wrote:

"Sorry I couldn’t make it to the @isntitromantic premier tonight guys. Been dealing with some pretty annoying health stuff the last couple days. Lucky I have the best girl in the world to represent for me! Thanks for the support babe! I hope everyone enjoys the movie! It’s a perfect Valentine’s Day flick so if ya ain’t got nothin better to do then go see it! Love to all!"

How sweet is that? Whatever Hemsworth was dealing with sounds like a real bummer, but it's good to hear that he's taking the time he needs to recover — even if it means missing out on the premiere for his newest movie.

Talking to Entertainment Tonight at the event, Cyrus didn't go into detail about her husband's illness, but she did say that Hemsworth was busy "getting healthy" and that he needed to take care of himself for now.

"Liam's feeling good. He has to, you know, rest up, but he loves this film. He's so proud of it and I really wanted to be able to represent it for him," she said, later joking, "I had my dress already and I couldn't let it go to waste."

Hopefully, Hemsworth gets well soon, and in the meantime, it seems like he's in good hands with Cyrus taking care of him. They've only been married for a couple of months and they've already gotten the teamwork thing down.