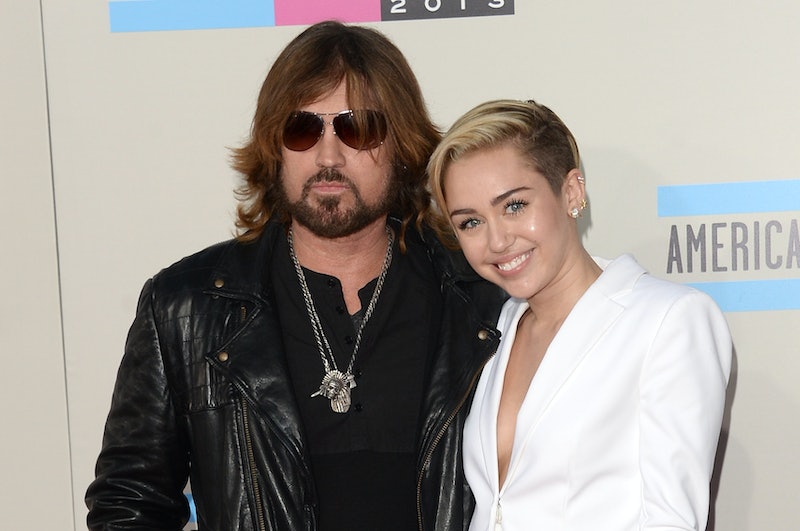 Some parents are still coming to terms with all the new-fangled technology we have these days. You can't really blame them, though — it's not like they grew up with the stuff. In an attempt to further her own father's technological savvy, Miley Cyrus gave Billy Ray an Instagram photo lesson, as recently captured in a screenshot by @CommentsByCelebs. The struggle is real, no doubt about that, but Miley actually went about the whole thing in a genuinely helpful way.

On Sept. 23, Billy Ray shared a throwback photo of him and his dad from way back in the day — 30 years ago, actually, according to his caption. It's pretty grainy and blurry, but luckily, you can still make out his glorious mullet. Still, Miley saw the poor quality of the post as a teachable moment for her pops and took to the comments to share some helpful tips. "Dad. We can't be taking photos of photos with a blackberry," she wrote. "Tooooo much working against you fath," which is probably a nickname for "father."

She then went on to tell her dad, "Go get the iPad mom got you for your birthday. Ps that little circle on the front is a camera," she pointed out, "push the little square button on the screen."

A lot of kids would probably take the sarcastic route when it comes to this kind of thing, but Miley legit walked her dad down the road to improvement, step by step. Also, it's pretty hilarious to know that Billy Ray still has a Blackberry — and that he's taking photos of photos *with* his Blackberry, instead of with his iPad, which he apparently owns but doesn't know how to use.

Billy Ray might not be hip to new technology and best practices for quality Instagram posts, but he's definitely still hip to what makes a hit these days. Earlier this year, he was approached by an executive at Columbia Records who wanted him to listen to a song by a then-unknown rapper named Lil Nas X, according to a recent interview between the star and The Washington Post. That song, of course, was "Old Town Road," and Billy Ray's appearance on the remix of the track turned a hit into a hit of epic proportions.

"I just loved this song," Billy Ray told the New York Post of "Old Town Road" back in July, "and I thought the song just brought people together from all walks of life. It was really just a beautiful thing to be a part of, and I’m so glad that this song came into my life. It’s been a ride like no other. It’s like a magic horse, and it just kept running, man."

Billy Ray's own superstar daughter Miley is among the many fans who've shown the remix a lot of love. In fact, Miley surprised the audience at Glastonbury in June by bringing out her dad and Lil Nas X to perform their big hit during her set.

Oh, and in case you were curious, yes, Billy Ray did post a clip from that performance on his Instagram. It was not, however, recorded on his Blackberry, which means you can actually watch it without having to squint your eyes.