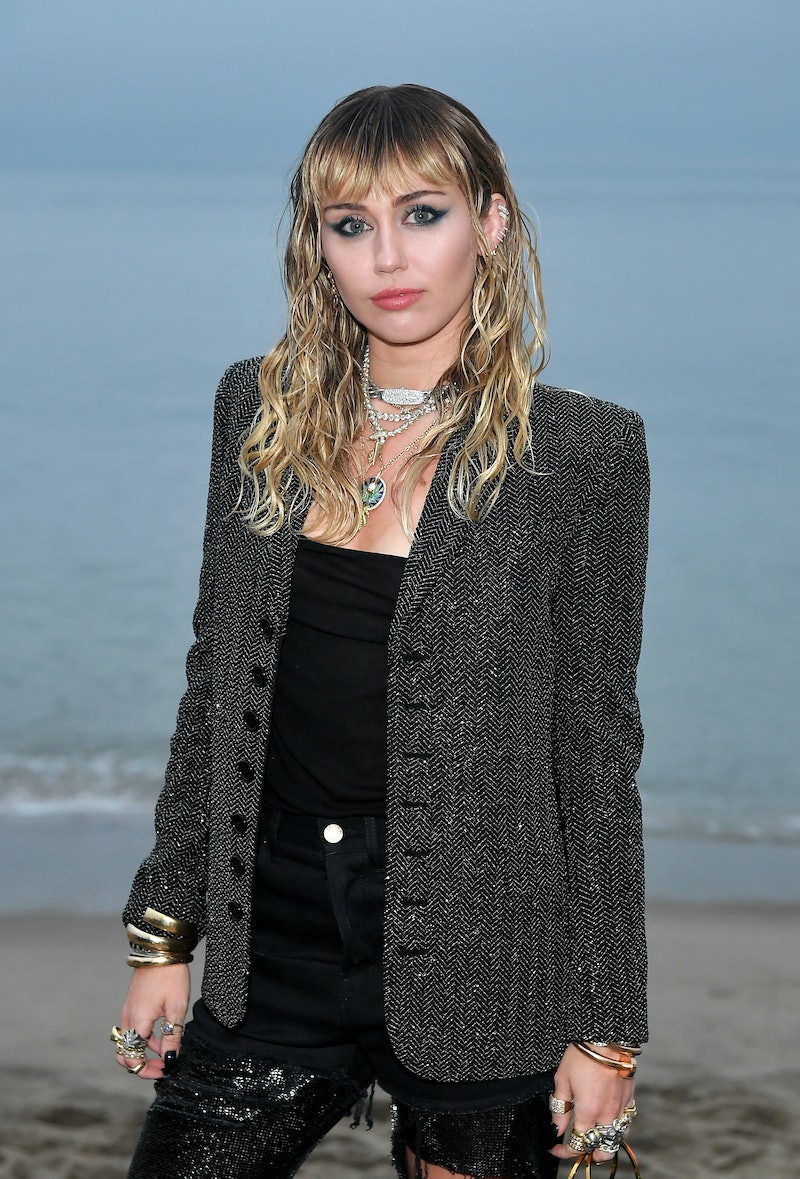 After her breakup from Liam Hemsworth, Miley Cyrus went on a girls trip with Kaitlynn Carter and her sister Brandi Cyrus. The getaway seemed to have meant a lot to the artist, because Miley Cyrus got an Italian vacation-inspired tattoo.

Cyrus went to celebrity tattoo artist Dr. Woo on Aug. 21, who has a rumored two-year waiting list and is dubbed “the most in-demand tattooist in the world.” Some of the L.A.-based tattoo artist's clientele include Cara Delevingne, Sarah Hyland, and Emilia Clarke.

Cyrus' latest ink (she has over 40 tattoos) is a depiction of the family crest of the Visconti family of Milan. She got it on her forearm, and it looks like an old stone crest. The emblem is the symbol of Milan, and the image captures a slithering snake eating a man.

Dr. Woo was the first person to offer a glimpse of Cyrus' new tattoo, posting a photo of it onto his Instagram. "Cool old sculpture Miley Cyrus found in Italy," the tattoo artist wrote.

Cyrus went on her girls' weekend in the middle of Aug., right after her breakup. After dating Hemsworth for 10 years and being married for eight months, the couple decided to part ways.

Immediately after, Cyrus flew to Italy to unwind, and headed to Lake Como. While there, Cyrus debuted her new relationship with Carter, who she was photographed on her yacht kissing. Carter recently split from her husband, Brody Jenner, and a source revealed to E! News that the pair "bonded over the fact that they're going through a similar experience."

But Cyrus also seemed to do a lot of soul-searching in Italy. In an Instagram photo of Cyrus standing on top of the Dolomite Mountains, the singer shared how she was moving forward.

"Don’t fight evolution, because you will never win. Like the mountain I am standing on top of, which was once under water, connected with Africa, change is inevitable," Cyrus wrote. "My dad always told me 'Nature never hurries but it is always on time'.... it fills my heart with peace and hope KNOWING that is true. I was taught to respect the planet and its process and I am committed to doing the same with my own...."

In a second photo, Cyrus captioned, "Life’s a climb... but the view is great."

The Visconti family crest isn't the first tattoo that Dr. Woo did for Cyrus. The "Slide Away" singer has been going to Dr. Woo as far back as 2015, when she got a small puffer fish tattoo to commemorate her pet puffer fish passing away.

In 2016, Cyrus went back to Dr. Woo to get a Vegemite tattoo on her left arm. Vegemite is loved by Australians, and Hemsworth was spotted with the same one on his leg. That marked their first couple's tattoo.

In 2017, Cyrus asked Dr. Woo to commemorate another one of her pets, this time creating a detailed portrait of her Shetland Sheepdog, Emu.

A lot of Cyrus' tattoos are meaningful to her, so it's no surprise she decided to get an Italian-inspired one.

More like this
All The Products Hailey Bieber Used For Her Birthday Makeup Look
By Olivia Rose Ferreiro
Kim Kardashian On The Beauty Hack That “Changed My Life, My Skin, My Confidence”
By Taylor Jean Stephan
Cardi B Showed A Closer Look At Her "Wave" Face Tattoo
By Olivia Rose Ferreiro
The Definitive Guide To Every Real Housewife Beauty Brand
By Audrey Noble
Get Even More From Bustle — Sign Up For The Newsletter