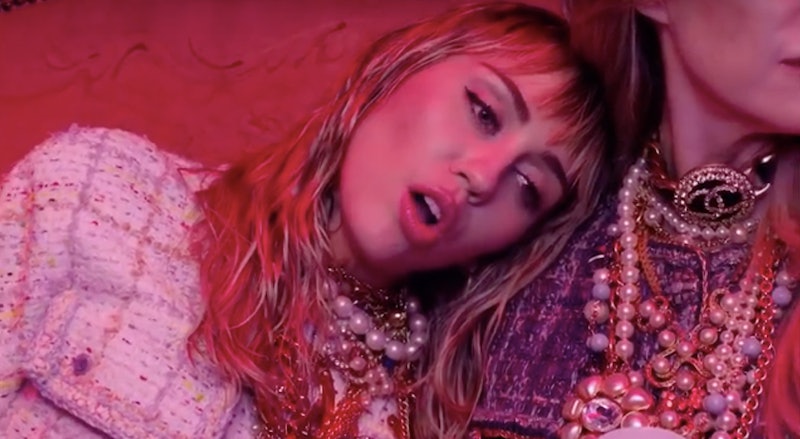 Miley gets it from her momma. And in Miley Cyrus' new video for "Mother's Daughter" off her latest EP, She Is Coming, the singer shows exactly what that means with a little help from her mom, Tish Cyrus, who, no surprise, inspired the new track. Turns out, Cyrus' rebellious streak isn't something in the water, it's just in her genes. And she's not the only who owes her mom a thanks for allowing her to let her freak flag fly.

On Tuesday (July 2), Cyrus dropped the "Mother's Daughter" video, which she had been teasing for the last day with Instagrams of her and her mom looking like twinsies in Chanel. The titillating cherry-hued clip — that feels like a spiritual twin to Madonna's latex-filled "Human Nature" video — has close-ups of piercings and Cyrus in a vagina dentata-style jumpsuit. It features flashing messages that feel rife for Miley merch like "Not an Object," "Sin Is In Your Eyes," and "Tough Titties," ending with Tish and her daughter sitting rather demurely sipping tea.

But Cyrus isn't the only one who's her mother's daughter. In this video, Cyrus is celebrating others who took a page from their mom's book and decided to stand out instead of fitting in. Not to mention, stand up for what they believe in, which doesn't always fit Hollywood's standards. The video itself features shots of a handful of other activists, like Paige Fralix, dancer Amazon Ashley, and Trydryn Scott, who she also made sure to highlight on her Instagram page.

This video is saying a whole lot with its imagery, which Cyrus hopes will stick with fans way after the video ends. "Music makes Movements!" Cyrus tweeted following the release of the video. "We got the power!"

The "Mother's Daughter" video also features powerful shots of Melanie Sierra, a.k.a. Mela Murder, who appeared in 2017's The Florida Project, holding a baby as if she's a more aggro Mother Mary with her spiked crown and tattoos. In the final shots, Miley shows up as a punk rock Joan of Arc. The black, trans, disabled model Aaron Philip also makes a cameo to lip sync along. But, on Cyrus' Instagram, Philip made it clear, "I do not identify or label myself as an activist, but that’s just because I care - and I think everyone should, activist or not. I fight for my freedom by being myself.”

Actor Angelina Duplisea is doing the same, playing the classic Victorian beauty in this clip, reclining on a red couch in the nude, fanning herself as if to say she's so over hearing other people's opinions. On Instagram, Cyrus posted a screengrab of Duplisea with a quote that tackles body positivity.

"Fat acceptance is based on the notion that all fat people, regardless of health, deserve respect," Duplisea is quoted as saying in the caption. The quote went on to clap back at those who think it's OK to mock her body and others who look like her on social media, asking them to think about why they're spreading such hate.

And that feels like the message Cyrus wants to send with this video, don't be afraid to be you, she certainly isn't. And she wants everyone to know, it's Mama Tish they can thank for that.

More like this
Twitter Is Roasting Liam Hemsworth Thanks To Miley Cyrus' New Song “Flowers”
By Jake Viswanath
5 Wild Theories About Miley Cyrus’ “Flowers” Music Video
By Jake Viswanath
"Lavender Haze" Star Laith Ashley Breaks Down Filming With Taylor Swift
By Jake Viswanath
Cruz Beckham Teased New Music With An Adorable Nod To Mom Victoria Beckham
By Stephanie Topacio Long
Get Even More From Bustle — Sign Up For The Newsletter
From hair trends to relationship advice, our daily newsletter has everything you need to sound like a person who’s on TikTok, even if you aren’t.