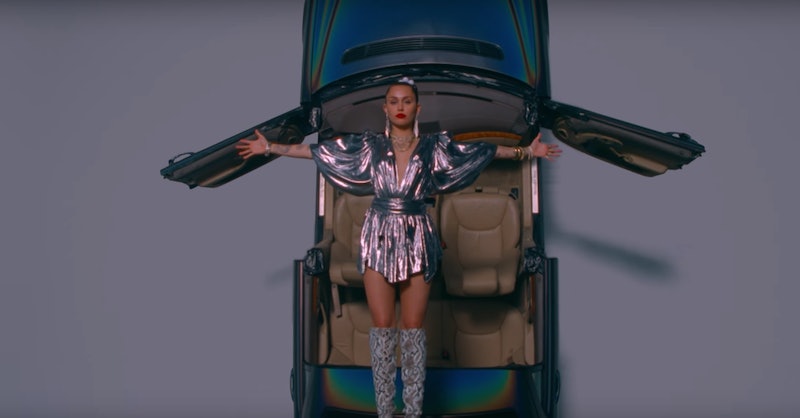 On Thursday, Nov. 29, Miley Cyrus dropped a poignant new song. Cyrus and Mark Ronson's song "Nothing Breaks Like A Heart" dropped on Thursday night with a music video that is a powerful look at gun control. It's clear that Ronson, Cyrus, and their production crews paid a ton of attention to all of the details in the video. While its overarching theme seems to be about Cyrus' career and her life in the spotlight, there's plenty of social commentary about larger issues, including gun control and police brutality, as well.

The video opens with a headphone-clad child playing with bullets as if they were toys. It's discomforting to see the child smile while holding a bullet in each hand. The scene seems to suggest that guns — and gun violence — have become so embedded in American culture that they're as commonplace as playthings.

And as a fan pointed out on Twitter, the bullet that goes through Cyrus' car later in the video is fired by the same child. At 1:57 in the video, the camera pans out to show that the young person is actually wearing the headphones because they're at a shooting range, firing a gun at the human outlines in front of them. The video then shows other children who are also firing bullets, and Cyrus drives her car into the shooting range itself. The children shoot out the car's windows, with one bullet eventually going directly in front of the singer's face.

In addition to the gun control commentary, the video also appears to support the Take a Knee movement. At 2:54, there's a shot featuring a group of football players of various ethnicities kneeling by the side of the road. It's worth pointing out that before the moving camera shows the football players, there's a brief shot of a group of white men in suits who appear to be frowning.The Take a Knee movement, started by football player Colin Kaepernick, is a protest against police brutality. Starting in 2016, Kaepernick knelt while the national anthem was played at the start of football games as a form of peaceful protest against racial discrimination.

Cyrus' decision to feature the Take a Knee movement, in particular, could be a response to criticism she's received in the past. The "We Can't Stop" singer has faced criticism for cultural appropriation, especially after her use of twerking and Black backup dancers at the 2013 VMAs. Showing her support for the movement, and for Kaepernick's fight for racial equality, seems to be a step in the right direction for Cyrus.

Aside from the more political scenes in the video, there also appears to be plenty of commentary on Cyrus' own career. She grew up in the spotlight, having starred on Hannah Montana before launching her own music. After being a Disney Channel star, Cyrus' moves were closely followed by the media, a fact that seems to be reflected in the "Nothing Breaks Like a Heart" video's ongoing car chase.

The video ends with Cyrus standing in front of her car, with the doors open and her arms spread wide. The camera pans out to reveal that she's standing in an art installation. It seems to be a commentary on the fact that many people might think that she and other celebrities' live exist for public consumption. But as the video shows, there are real people, and emotions, behind all of these headlines and reports.

Cyrus' new video is a lot to take in, and there's clearly a lot weighing on her mind right now. With everything going on in the world, there's more to focus on than celebrities' every move, a fact that the "Nothing Breaks Like A Heart" video heartbreakingly illustrates, as the song's title suggests.