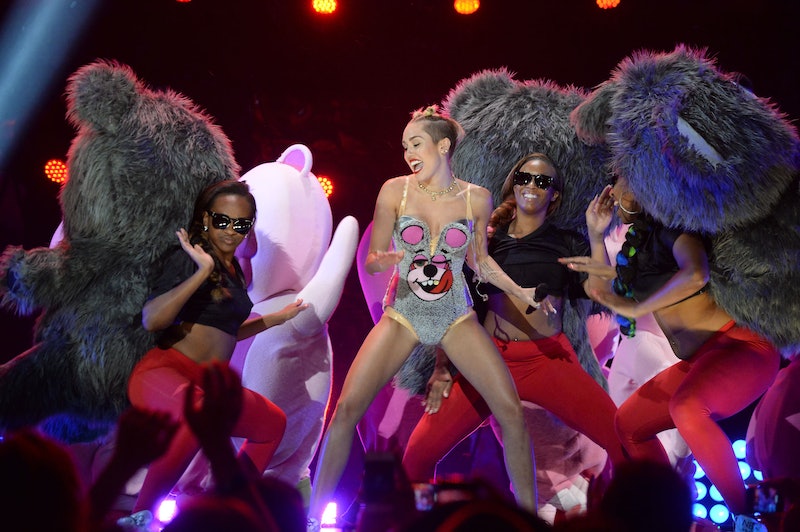 Miley Cyrus twerking on Robin Thicke in nude latex is an iconic image in pop culture, but it also caused some pain and insecurity for the multi-faceted superstar. Miley Cyrus opened up about feeling body-shamed after her infamous 2013 VMAs performance. She made the saddening revelation during the March 17 installment of her new Instagram Live talk show Bright Minded: Live With Miley.

During an all-encompassing conversation with fellow former Disney star Demi Lovato, while they were both in self-quarantine at home, the dynamic duo spoke about body image issues and how to learn to accept your body for what it is. On Cyrus' part, she talked about how the jokes and memes spawned by the infamous VMAs performance, specifically ones comparing her body to a turkey, affected her confidence and led her not to wear shorts and other clothes for "two or three years."

"I stopped wearing skirts on stage, all this sh*t because after the VMAs and I had on my cute little nude bodysuit, everyone started comparing me to a turkey and putting a turkey on my outfit," the singer explained. "I was just so skinny and so pasty and they kept putting me next to this turkey, and I was feeling so bad on myself that I did not wear a bikini for like two years."

While the body shaming did help Cyrus realize that she wanted to use her platform "for a bigger purpose," it also made her feel like her badass image of confidence was a lie. "The worse thing that I would feel like I would be to my fans is lying or a fraud," she said. "I felt like having this persona of being the most confident girl on the planet was actually kind of fraud because I was so insecure on the inside that in my personal life I wasn’t even wearing bathing suits and shorts."

It was a sentiment that Lovato said she related with all too well, especially when she made her 2015 single "Confident." "My message was that I was so confident but in reality, I was working out so much and eating such a strict diet that I wasn't confident," she told Cyrus. "Now I feel like I'm more confident than I was back then. And I might be heavier than I was, but I'm more confident now. And that's better to me."

Lovato also expressed regret over how she wasn't there for Cyrus when she was going through those struggles. "I'm so sad that you went through that, and I had no idea," she said. "I feel like we've gone through times where we're closer and then distant and that's fine, that's what friends do. I just wish I could've been there for you."

Now, it's clear that the two Disney Channel icons are thick as thieves once again, and our hearts truly can't take it.