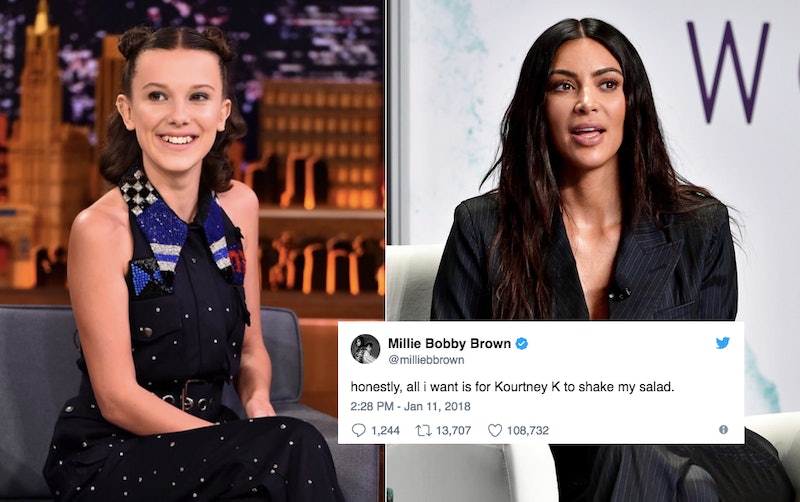 If you’ve ever wanted to sit down and eat a salad with the Kardashian sisters, you’re certainly not alone. On Thursday, Stranger Things star Millie Bobby Brown tweeted about the Kardashians and made clear that it's among her dreams to chow down on some greens with the Keeping Up With The Kardashians stars. Kim Kardashian rushed to the rescue saying that she could make her dream come true. It’s not the first time that Brown and the Kardashians have expressed their love for one another, either.

Brown who is a self-proclaimed fan of Keeping Up With The Kardashians, tweeted out her hopes and dreams on Thursday: “Honestly, all I want is for Kourtney K to shake my salad.” She was probably watching any given episode of the show, as the Kardashians are avid salad eaters and shakers, so much so that the Kardashian Salad Shake has become an infamous move.

Kim was quick to come through for Eleven, quote tweeting her and responding: “I can arrange this!" And, according to People, Brown’s salad-shaker of choice Kourtney screen-shotted the 13-year-old's tweet and put it in her Instagram story, adding some sweet pink handwritten text over it saying “Anytime.”

It seems like Brown’s got something in common with Eleven and can make just about anything happen, as she is soon to be a salad shaker. She responded back to Kim: “KIM! Grab your calendar it’s happenin. My dream has come true.”

And when Brown said it was her dream, she wasn't kidding. She’s expressed her unconditional love for Keeping Up With the Kardashians before. Back in November in an interview on The Tonight Show With Jimmy Fallon, Brown made clear how much she loves the show. “I love them, I really do!" she told Fallon, who seemed pretty bemused at her fandom. She went on:

Her impressions were spot on, by the way. And the Kardashians took notice and declared that the love was mutual, sending Brown into a tizzy. Khloé Kardashian tweeted a clip of the video, adding, "It's a mutual love fest!! I LOVE you @milliebbrown! #Okurrrrttt this video made me smile from ear to ear BIBLE." This was just a day after Khloé was tweeting about watching Stranger Things for the first time and totally loving it.

Kris Jenner took notice, too, tweeting: "I love you @milliebbrown, you are so adorable! Thanks for watching #KUWTK! We are huge fans of yours also!!" Brown was on a flight when she got these amazing responses but even if she were on the ground she'd be floating, anyway.

And while Kourtney was already obsessed Stranger Things, Kim tweeted that she was just starting the show later in November, writing, "I feel like I'm going to be up all night trying to watch it all!" Brown was thrilled, of course, as she herself loves to marathon KUWTK. She had even said earlier that it was the only thing that Eleven watched on the Stranger Things set.

So, it looks like a Millie Bobby Brown-Kardashians meet-and-greet and salad shake is inevitable! Brown didn't say why Kourtney is her salad shaker of choice, but maybe she just admired her technique the most. They all adore each other, that is for sure. Let the salad shaking and marathon-watching commence.