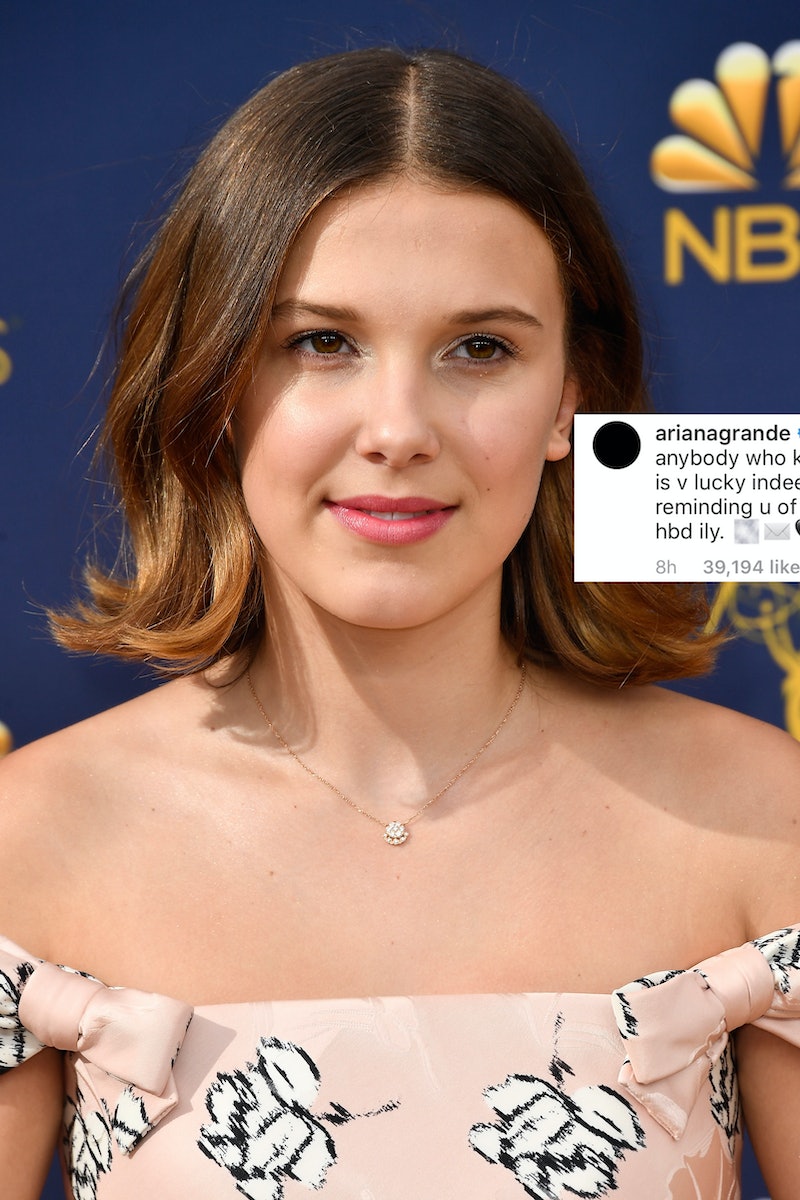 Based on all of birthday messages that she's received, Millie Bobby Brown is surrounded by nothing but love, light, and some incredible positivity from her celebrity friends. On Feb. 19, many celebrities commented on Millie Bobby Brown's Instagram birthday post, with everyone from Ariana Grande to Paris Hilton getting in on the b-day fun.

Brown wrote a simple Instagram message in honor of her special day. Alongside a photo of herself holding two balloons that made up "15," she wrote, "February 19th, 2004 = 15 years old 👼✨." Based on her Instagram Story, it appears that she may have celebrated her big day with a couple of friends in quite a messy fashion. In one snap that she posted, Brown and two of her friends had some fun with her cake, as the messy remnants of the treat showcase.

The Stranger Things star has to be feeling the love on her special day, based on the comments on her Instagram post and other lovely posts from the actor's closest friends. On her Instagram Story, Brown showcased some of the birthday wishes she received, including a cute message from her Stranger Things costar Caleb McLaughlin and her friend, Greer Autumn Morgan. And, of course, she also got some love from more than a few very famous faces.

Here's a roundup of those famous birthday wishes.

As previously mentioned, Brown received an incredibly touching message from Grande, which is basically the best birthday gift anyone could ever ask for. The "thank u, next" singer wrote:

"u have such a big heart. anybody who knows u (even just a little) is v lucky indeed. i'll jus be here loudly reminding u of that whenever u need me! hbd ily."

Naturally, the actor was touched by her friend's kind words and she replied, "thx ur the best doppelgänger a girl could ask for. ilysm calling u now lol."

Dua Lipa's message in honor of Brown's birthday was all about sharing the love. She wrote, "Happy Birthday Angel. Sending you all the love in the world."

Paris Hilton kept it simple as she wished Brown a "Happy Birthday!"

Grown-ish star Yara Shahidi's comment urged Brown to make this her most exciting year yet, as she wrote, "Wishing you the most adventurous, abundant year."

The actor's 15th birthday really had it all, whether it was a birthday shoutout she received from everyone's favorite superstar, some well wishes from her Stranger Things costars, or even a sweet, casual hangout with her close friends. Basically, it sounds as though Brown's birthday celebration was truly one for the ages.

More like this
Kathy Hilton Awkwardly Misidentified Lizzo As Precious On Live TV
By Jake Viswanath
Kanye West Has The Most Kanye Reaction To Kim Kardashian & Pete Davidson's Split
By Jake Viswanath
The Sean Bean Intimacy Coordinator Controversy, Explained
By Sam Ramsden
Nicola Coughlan Just Revived 'Derry Girls' In The Most Unexpected Way
By El Hunt
Get Even More From Bustle — Sign Up For The Newsletter