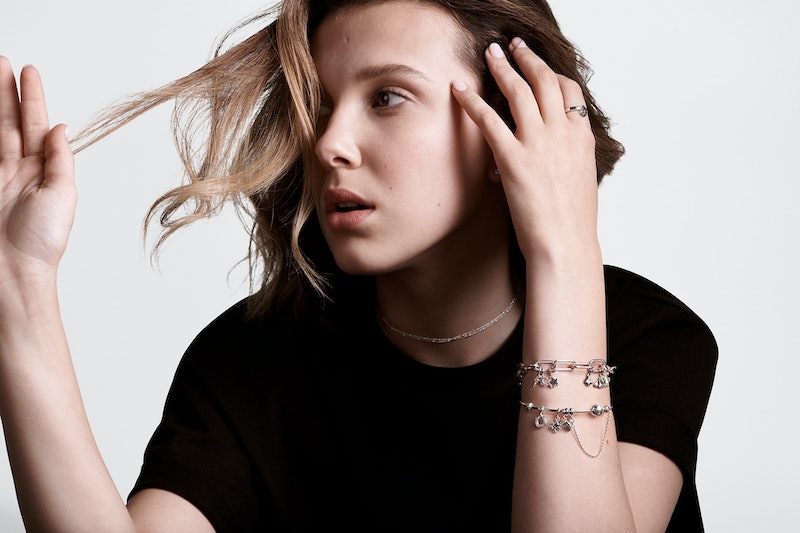 Pandora have been leading the way when it comes to jewellery for some time now. You know what they say, you never forget your first Pandora bracelet. Too true. Over the years, Pandora has done a number of collaborations with the likes of Disney, Miranda Kerr, and many more. And the new Pandora x Millie Bobby Brown partnership may just be their most exciting yet. The collection, which will launch later in 2019, is sure to get people's attention.

At the age of just 15, Millie Bobby Brown has achieved so much. Most people will know has best as the star of Netflix's hit series Stranger Things, in which she plays Eleven. For this role, she's been the recipient of a whopping nine awards, according to Popbuzz. Pretty spectacular career for a 15 year old, right?

And Brown's achievements extend beyond acting. In April 2018, when she was just 14 years old (14!), the actor became the youngest person to be listed in Time magazine's 100 most influential people. And, later that year, in November, she was named as UNICEF’s newest Goodwill Ambassador, making her the youngest ambassador ever.

Now Brown has another thing to add to her CV, as Pandora have announced a global partnership with Brown. I mean, is there anything this girl can't do? Seriously.

The new Pandora x Millie Bobby Brown collection will celebrate self expression and, in a statement sent to Bustle UK, Brown says:

"I feel extremely honoured to be partnering with Pandora. I love Pandora because everyone can tell their own story, and each symbol can represent your individuality."

The campaign has been shot by esteemed fashion photographer Cass Bird, who shot the likes of Jay- Z, Yara Shahidi, and Kendall Jenner.

In an official image from the campaign released on 7 Aug., Brown is wearing what seems to be an updated version of the classic Pandora bangle, which, in my mind, really is a timeless piece of jewellery. Brown hasn't gone overboard with the pieces that she has chosen, wearing another bracelet with charms, a silver ring, and my favourite piece of all: a dainty silver choker. A lot of people still shy away from chokers for fear of them looking too chunky and overbearing but this piece is so petite and elegant I'm sure it'll be to a lot of people's tastes.

Can you tell I'm obsessed? As soon as the collection drops, I'll be first in line for it.

"Millie Bobby Brown is the perfect ambassador for the next generation of Pandora jewellery that empowers young women to express themselves. Not only an accomplished actor and making her presence as a voice of her generation known, she also brings a youthful and individual approach to jewellery that perfectly complements Pandora’s vision and creativity."

Whether it be for their classic bangles or their stackable rings, Pandora have been so popular for some time now. So I have really high hopes for this collection. Brown has signed a two year contract with Pandora and she will officially be an ambassador in October 2019, so you'll be able to get your hands on this new collection very soon.