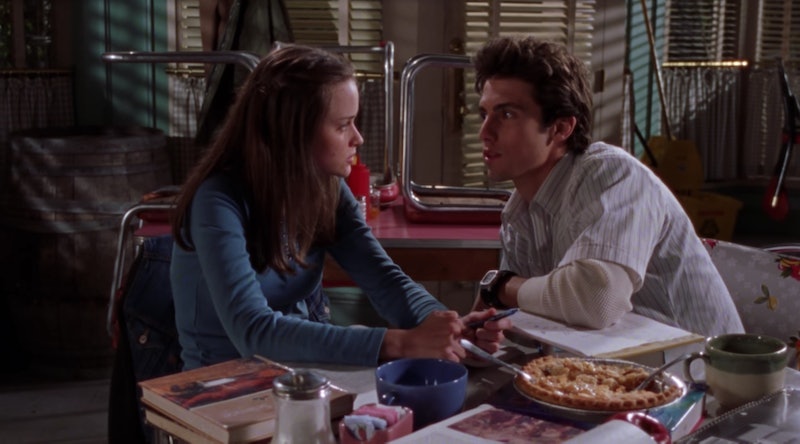 Gather round, Gilmore Girls fans, because Milo Ventimiglia revealed his favorite Rory and Jess moment. Die-hard fans might think the This Is Us star loved when Rory and Jess first kissed or when they first met or when the two officially became a couple, but none of those moments are at the top of his list. Ventimiglia's favorite moment between the characters isn't only a memorable one, but was part of an episode that was fun for both Ventimiglia and Alexis Bledel to film.

In a recent interview with Buzzfeed (and puppies!), Ventimiglia said (around the 4:35 mark below) his favorite moment happened in Season 2, Episode 19. "I can tell you, it's actually from the episode called 'Teach Me Tonight,'" he admitted. Do you remember that episode? Let's just say it involved ice cream in cones. As Ventimiglia continued, "It's when they're driving around getting ice cream in cones, cones. That was a fun episode to film. Alexis and I had a good time."

The best part about Ventimiglia's response is he said "ice cream in cones" exactly how Jess said it in the episode. He clearly hasn't lost his touch as Luke's nephew. Really, he'll always be Jess to Gilmore Girls fans, right?

Now, "Teach Me Tonight" partially revolved around Rory tutoring Jess. During their study session at Luke's diner, Jess decided he wanted to get ice cream — in cones. Even though the diner had ice cream, Luke's didn't have cones for the frozen treat. Jess was adamant that he had to have an actual ice cream cone, to which Rory obliged after briefly going back and forth on the issue.

Jess ended up driving Rory's car, while she rode in the passenger seat. Despite the two getting into a minor car accident (Rory fractured her wrist), they had a nice conversation about their futures. Rory tried to convince Jess that not only was he smart, but that he was college material. As for Jess, after a few jokes, he told Rory that she was certainly capable of being an overseas correspondent. Sadly, they ended up in a car accident and Lorelai even blamed Luke for Jess causing the accident. It was never easy seeing Luke and Lorelai on opposite sides, but this made for one of their more heated and uncomfortable arguments.

The ice cream in cones didn't end up becoming a happily ever after moment, that's for sure. Still, it sounds like Ventimiglia and Bledel had a great time filming the episode together.

During his sitdown with Buzzfeed, Ventimiglia also discussed if he thought Rory should have ended up with Jess, Logan, or Dean. His answer? "None of the above. They're from the past. People, Rory needs to move on forever in life. OK?" As much as fans are either Team Jess, Team Logan, or Team Dean, Ventimiglia's perspective on Rory's love life makes sense.

It's always nice to see actors take a walk down memory lane when it comes to past projects. And when it comes to Gilmore Girls? The more Ventimiglia can talk about the show, his character, and ice cream cones, the better.