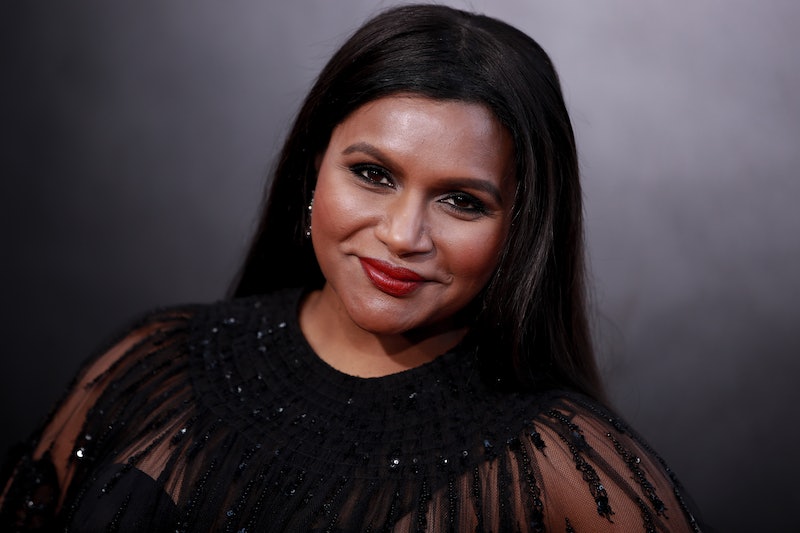 It's impossible not to look at Mindy Kaling's overwhelming list of accomplishments and not be impressed. She created and starred in The Mindy Project; she wrote more episodes of The Office than anyone else on staff; and now she's headlining major motion pictures. Yet despite all that, Kaling has managed to separate herself from some of the stigmas that have been known to plague this business, particularly when it comes to being a "woman of a certain age." But unlike some, Mindy Kaling isn't afraid of aging in Hollywood and her reasoning behind it, as explained in an interview with Glamour published on June 4, is equal parts refreshing and empowering.

Kaling is weeks away from turning 40, which can serve as a major milestone to anyone, but as someone in the entertainment industry, it can become a little stressful and make one feel as though they need to stop the clock at all costs, especially if you're a woman. And while Kailng admitted that she deals with anxiety in many different ways, trying to adhere to unrealistic beauty standards isn't one of them. "How do I say this? Because I never had a career based on my physical beauty, I’m approaching aging without much dread," Kaling revealed during a recent interview with Glamour. "It’s so much harder to control that as we age than our mind or creative ideas."

Even when she was younger and just starting out in the industry, Kaling never felt like she fit into any one category, which proved to be extremely stressful for her at the time. She explained to Glamour:

"As a young person in Hollywood, I wasn’t skinny, and that made my twenties so unnecessarily difficult. It was such an emotional roller coaster, sometimes, of how I looked on screen compared with what other people looked like. Especially when you are a dark-skinned Indian woman who’s not even traditionally beautiful for Indian people, like the Bollywood stars who are fair with long hair and light green eyes or whatever. Even though I was on a show like The Office, where that’s not something you needed to be or look like, [it was hard]."

But despite how difficult that period in her life was, Kaling now has no regrets and feels like at this point in her career a lot of the pressure is off in that regard. "The upside of having that difficult time in my twenties is that now I approach my forties without this huge expectation that I need to maintain some sense of beauty," she stated. "I was never put on a pedestal because of my looks."

Even nowadays so much attention is given to how a woman looks rather than the talent behind it, which makes Kaling's words uplifting to hear, knowing that she doesn't feel the need to try and cater to the status quo. (It's one of the many reasons so many people in the world love and admire her.) However, she still sets high expectations for herself and strives to make a lasting impression on every project she's apart of. "You have this feeling, as a woman, that when you get into Hollywood as a writer and particularly as an actress you have a finite amount of time," Kaling added. "You have to make your imprint and get your coin, frankly.

And while the coin itself may be theoretical, her accomplishments are priceless.