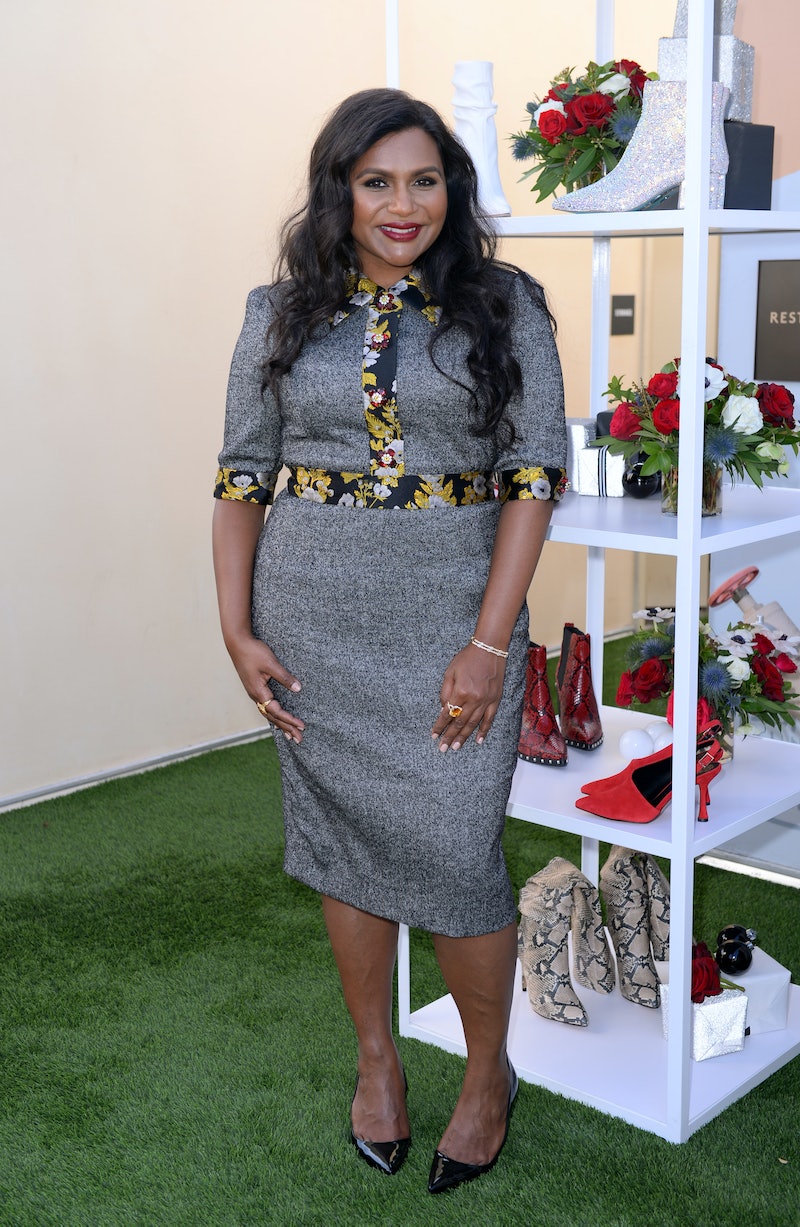 Mindy Kaling is an excellent gift giver. I don't know that from personal experience — she has never given me a physical present, though I consider the laughter she brings through her books, TV shows, and movies a gift in and of itself — but I can just tell. And after speaking with the actress, writer, and director at a DSW holiday event in West Hollywood last month, my assumption was confirmed to be true. Not only is she great at gifting, but she's also super generous at that.

Kaling teamed up with the shoe retailer to give back for the holidays, helping to promote the #DSWGives Do Good Pop-Up, which is open today through Dec. 15 in New York City. But it's not your typical kind of pop-up where you can shop.

"This pop-up is unlike other pop-ups where you can just go and buy things for yourself," Kaling tells me. While she loves her heels and booties, this pop-up encourages you to donate new or gently worn shoes instead. "DSW partnered with Soles4Souls so you can bring in a pair of shoes and donate it, which is great because it makes a difference in the lives of people that this organization helps and it's such a great way to clear your closet for more shoes! It helps you, too."

In addition to being able to help those in need, Kaling has lots of other reasons to love the holidays. December happens to be the month when her daughter Katherine was born and it's also her favorite season to dress for, because there's nothing more chic than layers, she shares.

I spoke to Kaling about her Christmas plans, what kind of gifts she thinks are the best, and what she's hoping to find under the tree for herself.

What do the holidays mean to you? What does it look like for your family?

They meant something very different before I had my daughter. I'm kind of the youngest in my extended family, so when you're the youngest in your early '30s, it gets kind of sad. <laughs> It got so much more fun with my daughter. And because this year, she's almost two, it'll be the first Christmas where she knows about Santa and she's waiting for presents. It's pretty traditional — we're gonna get a tree and her birthday is on the 15th. So it's just a real party time. December is like endless events and celebrations. It'll be a lot of decorations. I always do lights outside of the house.

I'm sure you are an excellent gift giver. What are some tips for not messing it up. Like, not giving an awful gift.

No one has ever been mad about receiving a book. I love receiving books. I think it's — especially in this time when we use our phones so much more — it's kind of great to get like, a thriller or a great best seller. I received Educated, that Tara Westover book, as a gift, which was so amazing and great. I think a book is always a great present. And honestly, a massage. I know so few people who don't like massages. So to me, it's such a no-brainer gift.

You always have the cutest outfits on and you're very into fashion. What's going to be your go-to outfit for the holidays?

It's so nice because when you live in LA, we're wearing tank tops and jeans for nine months of the year. It's the opposite of Chicago and Boston. But it is very hard for me to look fashionable when it's really hot because layers is what makes someone look chic. And holiday sparkle, to me, is one of the great joys of fashion. So for me, it's a mix of my favorite things, which are sparkles and layers. So my go-to will just be a bunch of sparkly tweed. Things that you can't wear all year round, like velvet.

How has your style changed since becoming a mom?

Not very much actually. My style is always changing period because I love trends. I'm an unabashed trend follower. So, I don't know that having a daughter has changed it that much, although because I was so scared of being the mom who never wore stilettos again, I'm almost defiantly wearing more stilettos. And my DSW picks for my shoes, a lot of them were very high heels. Ever since I was 14 years old, I've been obsessed with them. Not a ton. I wasn't the mom who just wore sneakers and stuff. But I do love a good moccasin to run around in.

You mentioned that you bought your prom shoes at DSW?

That was a major pair of shoes for me. I think they were either Charles Jordan or Sam & Libby. Sam & Libby is such a high school brand for me. They had these flats with the big bows — that was their signature.

Who were some of your style icons growing up?

I don't know if this would be considered growing up, but in my early 20s, I lived in New York and Chloë Sevigny was like the most fashionable girl and to me, the Lower East Side in the East Village was as cool as you could get. I lived in Brooklyn, but we always took the train in to the bars and hung out there. And if you ran into or saw Chloë Sevigny in the street, it was such a big deal. And I remember I went to a J. Crew in Soho and I saw her trying on clothes, and I remember being like, 'Chloë Sevigny shops at J. Crew, this is so cool!' so that was very humanizing. To me, it was her and there was also this Indian actress named Aishwarya Rai who is like a supermodel and a huge Bollywood star and I always thought she was very beautiful.

We were talking earlier about how you like to follow fashion influencers. If you had your own fashion blog, what would be your aesthetic or style?

I think it would be patterns on patterns. That's something that I really love and not that many people feel confident rocking it. It's not that that's the only thing I love, but I think colorful patterns to me whenever I'm shopping, I'm always drawn to Pucci or Etro, those kind of designers that really not scared of color, like Roksanda, so to me that would probably be it. But the thing I probably Google the most is 'celebrities getting on planes.'

I love an airport style photo!

Right? I like what they wear on the plane! I always feel like, I don't need to be a slob when I get on the plane. Like, what did Gigi Hadid wear when she got on her private jet?

I want to know what's on your wish list for the holidays? What do you hope is under the tree for you?

I hadn't thought of that because obviously I'm a single mom so I didn't think I'd be getting any gifts. I've been really into cashmere separates. There's a couple really cute DSW booties on my list — I made a list of all of the boots that I wanted. I'd love to rock some booties. I think I'm only going to wear boots from three day before Christmas until April. Even if it's hot out. I'm just gonna do it.

This interview has been lightly edited and condensed for clarity

More like this
Taylor Swift’s Glitzy Grammys Look Is Giving Midnights
By Alyssa Lapid
Storm Reid Is A Morning Routine Girlie
By Carolyn Steber
Keyla Monterroso Mejia Is Finally The Star Of The Show
By Gabrielle Bondi
Bonnie Milligan's Wellness Routine, From Daily Journaling To Drugstore Teas
By Jessica Derschowitz
Get Even More From Bustle — Sign Up For The Newsletter
From hair trends to relationship advice, our daily newsletter has everything you need to sound like a person who’s on TikTok, even if you aren’t.