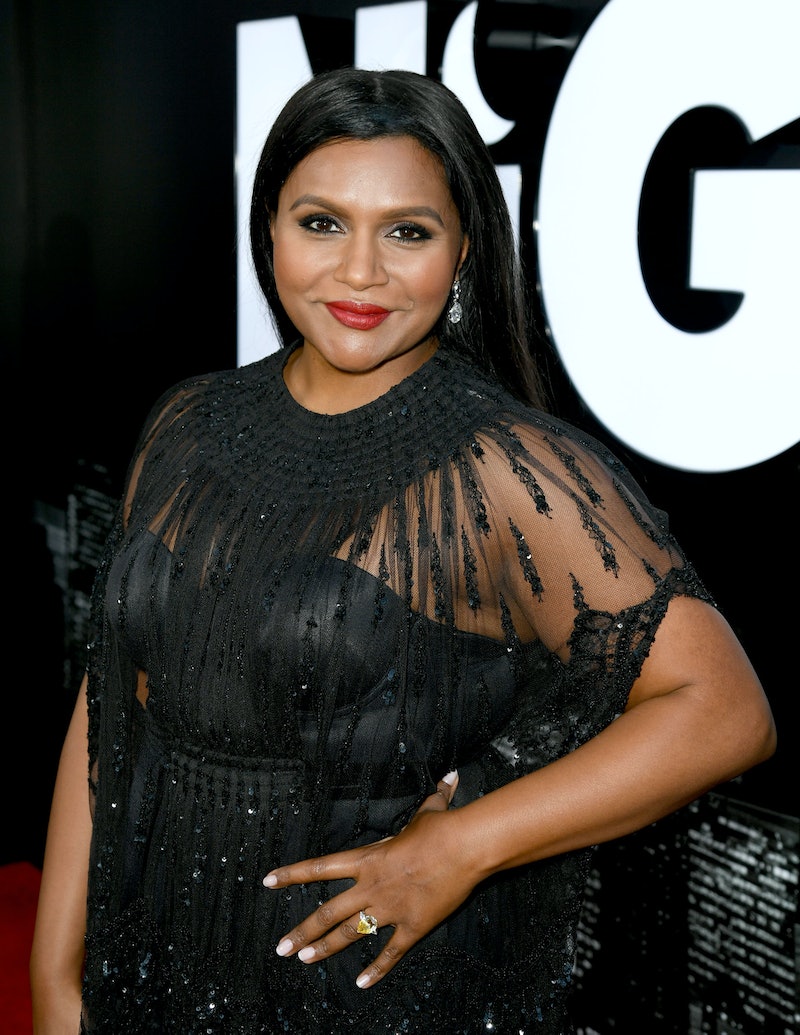 Like any proud parent, this actor already has plenty of amusing stories to share. On Monday, Mindy Kaling discussed motherhood during an interview on The Ellen DeGeneres Show, and the actor explained that her daughter Katherine is already proving to be boss material. Kaling even joked that her kid knows how to barter like she's in the mob — even though she isn't speaking quite yet.

The Late Night star stopped by the talk show to discuss her latest movie, the Met Gala, and of course, what it's like to be a relatively new mom. As fans may recall, Kaling gave birth to Katherine on Dec. 15, 2017, meaning she's nearly 18 months old. Per E! News, Kaling said in her new interview,

"When she was 3 months old it was easy because she was just a little blob. But now, I didn't know how much bribery there was in being a parent. Every time I see her, it's like Tony Soprano. I go up to her and I'm like, ‘Hey, you have to give me the remote controller.' And she's like, ‘You have to give me your car keys.'"

Her daughter's negotiating is apparently effective as well. "She's like in the mob," Kaling joked. "And she can barely talk, so that's my life right now."

Mob deals aside, Kaling seems to be enjoying parenthood. The appearance was not the first time the star told a funny and sweet story about her daughter on The Ellen DeGeneres Show. In June 2018, Kaling talked about bringing Katherine to Oprah's house, noting that her daughter seemed to understand how high stakes the visit was. She recalled,

"She'd been really fussy, she'd been fussy the whole way. And I'm like, 'Oh my god, am I going to be the person that brings a screaming baby into Oprah's cathedral of beauty and art?' And the minute we went in I was like, 'Katherine, please. Please. You have no idea how high the stakes are right now. And we walked into the door and her eyes went wide, and she stopped crying like she knew she was in Oprah's house."

Since her daughter was born, she's shared plenty of candid parenting advice. In January, Kaling opened up about adjusting to motherhood in an interview with HuffPost. She joked that perhaps the greatest lesson was that more exercises could have helped with chasing after her daughter, but the star also discussed raising a kid in today's society. She said,

"It’s really exciting. I think we always are accustomed to change happening linearly and slowly, and it felt like in the first year of my daughter’s life, there’s been a huge amount of awareness for women’s rights in the workplace, as far as feeling safe in the workplace and then also equal pay."

The star went on to note that she felt positive about the changing landscape of the professional world. "I feel really optimistic about it and excited that my daughter is growing up at such an exciting time," she said.

It's clear that Kaling is setting her daughter up to succeed. And one thing is for sure, when Katherine does begin her career, she will have plenty of experience with negotiating strategies. Given how much personality Katherine is already showing, fans can likely to hear even more funny stories once Kaling's daughter can talk.

Editor's Note: This post was updated on June 4 to include a video of Kaling's Ellen DeGeneres Show interview.