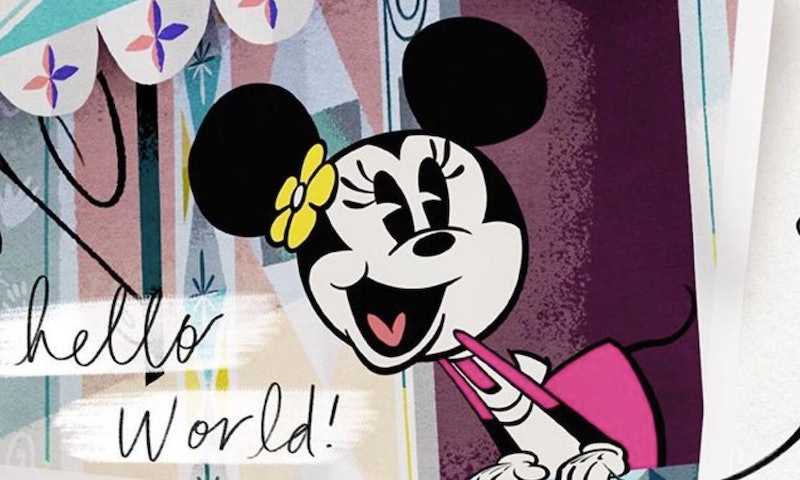 One small step for Instagram, one giant leap for adorable rodent-kind. The world's most famous lady mouse and hair accessory icon, Minnie Mouse, has her own Instagram account at last. The Instagram page launched Monday, March 25, just in time to commemorate the iconic character's 90th birthday. Since her account launched, Minnie has broken all de facto Instagram rules by posting not one, not two, but NINE photos in the course of one day. She also, at publishing, has racked up more than 12,000 followers. She may technically be a senior citizen, but this mouse is better at Instagram than you or anyone you know.

The first photo from Minnie's account depicts her in an early illustration style. She wears blue polka dot bloomers, a red bow, and yellow pumps. While standing against a scrapbook-like background with her signature and a flower, she glances knowingly at the front of the screen. The caption reads: "From me, to all of you! Follow along for more joy … and polka dots. 😉 XO, Minnie." The following posts include a gif, and seven other pictures with images that weave into one another. Even if it took a little while for Minnie to make an account, it is clear this has been in the works for quite a while.

Another impressive detail of the account is that, despite being in its infancy, there are already 11 permanent stories with their own matching title tiles. Of these, some are more predictable. One is designated for style essentials, which, Minnie explains, include a flower, a red hat, a polka dot skirt, and yellow heels. There is a BFF section, which has photos of all Minnie's best pals like Daisy and Donald Duck, Clarabelle, and of course, Mickey. Perhaps the most unexpected of all the permanent stories on Minnie's account is the one labeled "Self Care." The first story featured here gives some tips: find joy in the little things; spend time outdoors; laugh often. Clearly, there is more than meets the eye with this little lady. Though, you do learn a lot when you've been on earth for almost a century.

You may be wondering why a 90-year-old cartoon mouse would even want and Instagram profile. The mouse has almost everything, including a star on the Hollywood Walk of Fame. Well, why do you want an Instagram profile? To post photos and follow people, of course. Minnie Mouse has already proven she wants to post the kind of content that puts a bright spot in your day. So, who does someone like Minnie even want to follow? Simple: at publishing, Minnie follows only three accounts only: Disney, Minnie Style, and, of course M-I-C-K-E-Y M-O-U-S-E.

If you still aren't sure about Minnie Mouse's Instagram presence, consider this: In the brief time it took me to write this article, I had to change the number of followers three times, as she gained more than 2,000 in a little over an hour. Watch out, Selena Gomez — there's a new Disney babe on the 'gram, and she might just claim your crown.

More like this
Why Everyone Is "Soft Tagging" Friends On Instagram Right Now
By Alexis Morillo
Why TikTok Is Flooded With Controversial Videos About "Pick Me Girls"
By Courtney Young
This TikTok Song About An Unrequited Romance Has FYPs In Shambles
By Emma Carey
19 Latinx Therapists & Mental Health Experts To Follow On Instagram
By Kaitlyn Wylde, Naydeline Mejia and Lexi Inks
Get Even More From Bustle — Sign Up For The Newsletter