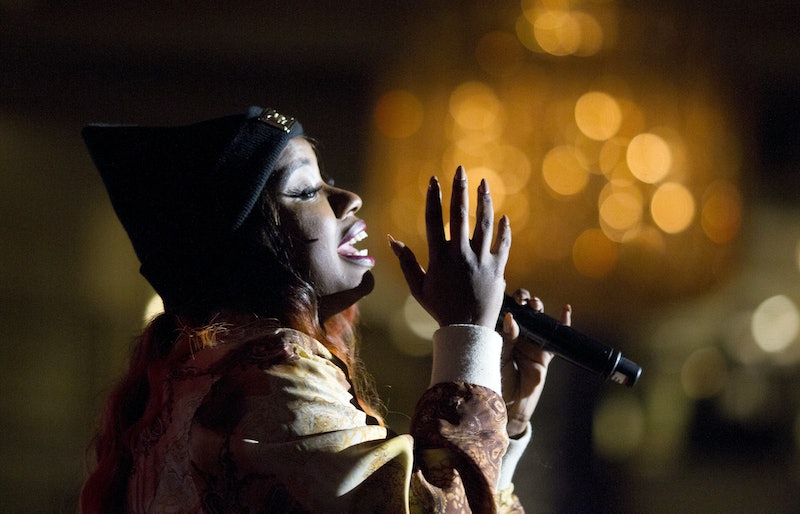 With the world's attention focused on the Black Lives Matter movement and topics such as race and discrimination, many people, including celebrities, have decided to come forward and share their experiences with racism. Social media has become an effective way to open up the conversation, as well as sharing footage of protests and links to educational resources, charities, and businesses. As discussions continue, Misha B has spoken openly about her X Factor experience and the infamous bullying accusation that left her feeling suicidal.

Back in 2011, 19-year-old Misha B was a frontrunner to win the talent show until she was accused of bullying other contestants by judges Tulisa Contostavlos and Louis Walsh. Live on the show, Misha B was described as "over-confident" and "fiesty," negative tropes often given to Black women in mainstream media.

Misha B, now 28, addressed the incident on Instagram Live over the weekend. In the hour-long recording she explained that she wanted to "honour the Black woman she is" and finally tell her side of the story.

“'Fiesty' and 'mean' — these are like the common words they use to describe Black women," she explained.

"You created this whole narrative of me being over-confident because Black girls shouldn’t be confident," she went on, visibly upset.

"It's something I've heard my whole like, 'you're too confident' or 'you're too loud'. What?

Misha B revealed that she had spent "zero" time with Tulisa and Louis ahead of their accusations.

"These judges spent about 1% time with me and their contestants, apart from Gary [Barlow] and Kelly [Rowland]," she said.

Misha B also accused the show of orchestrating the bullying storyline ahead of the live shows.

"Before I went on to the live show, they proposed to change my name to Misha B," she said.

"Little did I know, this was to play into their corrupted agenda for the 'Misha Bully' they had already orchestrated for this."

In his 2018 autobiography A Better Me, Barlow wrote: "About half an hour before the show goes live, the producers would come in and they’d go, ‘Oh my God. That Misha. She’s a bully. Can’t believe it. She is such a bully. In fact, you know what? You should say it. You should say it on air. She’s bullied everyone all week.’”

During the Instagram Live, the singer-songwriter spoke candidly about the aftermath of the show and dealing with suicidal thoughts.

With encouragement from her manager, Misha B attended therapy in 2012 and was diagnosed with post traumatic stress disorder. She revealed she still seeks therapy eight years later.

"Everything I endured, every emotion, those suicidal thoughts, that was the first time in my whole life that I'd ever felt suicidal," she added.

"Now I can look back and understand why that had to happen, so I could elevate emotionally, spiritually, mentally."

On June 15, an X Factor spokesperson responded to Misha's video and said their team was "looking into this matter" and "reaching out to Misha to discuss the important issues she has raised." A day later, Tulisa responded via her own Instagram, saying "I’m sorry if [Misha] feels that that situation was racially motivated. I can only speak from my side of the situation, which I can say it was 100% not."

On June 24, Tulisa shared another statement, saying that her initial response was her jumping into "defence mode." In her new statement, she said "I totally understand that it made Misha feel a certain way as a young Black girl hearing it from a young white girl on a huge platform, living in the oppressed society we do, full of racial slurs and undertones not knowing my thought process. It was something I did not understand at the time. I made a mistake and I completely take on board how that mistake has been viewed."

More like this
Molly-Mae & Tommy Fury Revealed Their Baby Girl's "Really Unusual" Name
By Sophie McEvoy and Sam Ramsden
Joey Essex Is Rumoured To Be Dating A 'Love Island' Favourite
By Sam Ramsden
Barney Walsh Has Been Linked With This Famous Miss World Winner
By Sophie McEvoy
'The Traitors' Is Officially Being Turned Into A Board Game
By El Hunt
Get The Very Best Of Bustle/UK
Sign up for Bustle UK's twice-weekly newsletter, featuring the latest must-watch TV, moving personal stories, and expert advice on the hottest viral buys.

This article was originally published on June 15, 2020