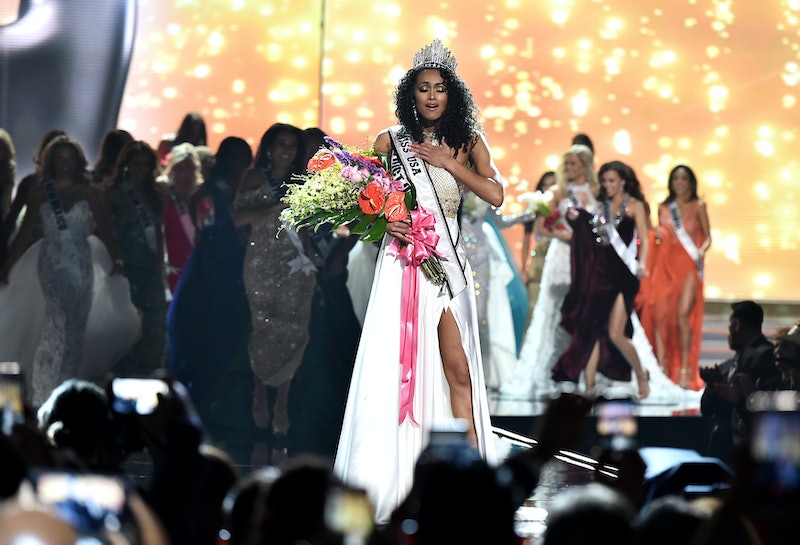 On May 14, Miss USA 2016 Deshauna Barber passed her crown onto her successor in Las Vegas. Miss District Of Columbia Kára McCullough won Miss USA 2017 in an elegant and accomplished field of women. Miss New Jersey Chhavi Verg was named runner-up. McCullough graciously accepted the crown and took her victory walk to conclude the pageant, which took place at the Mandalay Bay Events Center on the famous Las Vegas strip. She will will go on to represent the USA in the Miss Universe pageant later this year.

Barber herself is a former Miss District Of Columbia, so the crown is staying in D.C. for now. McCullough is a physical scientist at the United States Nuclear Regulatory Commission and runs a science outreach program for kids, so she is a hugely accomplished woman. The pageant was hosted by Terrence J and Julianne Hough and began with a field of 51 women representing the states, from Alabama to Wisconsin. Throughout the event, McCullough made it through the Top 10, Top 5, and Top 3 rounds. During the question rounds, she relayed her views about healthcare, creating jobs, and feminism in her responses. Some of her responses were criticized by viewers watching along on Twitter, as McCullough seemed to be against universal healthcare and does not personally identify as a feminist.

Last year, Barber represented Washington, D.C. in the pageant and was crowned as Miss USA 2016. On Saturday, Barber posted a fond farewell to her position on her personal Instagram account. She also posted a photo of her smiling with a poster advertising the 2017 pageant. "Tomorrow! Will you be watching as I crown a new queen?" she wrote in the caption. "This is a show you do not want to miss!"

And now Barber has helped to crown McCullough as 2017's Miss USA. While some Miss USA viewers may not agree with the choice, McCullough will reign for the next year.

More like this
What Is Jeanie Buss' Net Worth? The Lakers President Is Uber Rich
By Hugh McIntyre
Yes, Billboard Queen Angelyne Really Ran For Governor Of California
By Brad Witter
What Is Barack Obama’s Net Worth? He Makes *Way* More Now As An Ex-President
By Hugh McIntyre
'The Spy Who Died Twice' Is Based On A Major British Scandal
By El Hunt
Get Even More From Bustle — Sign Up For The Newsletter