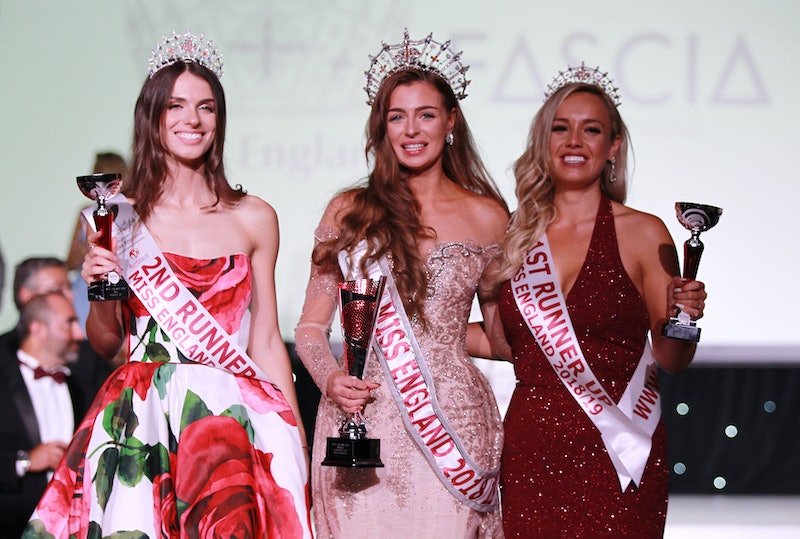 Beauty pageants have long been criticised for promoting and sustaining narrow, unrepresentative beauty standards, which still remain overwhelmingly white, slim, cisgender and non-disabled. This year, Miss England has launched a makeup free round, which organiser Angie Beasley says "will help contestants be more confident in their own skin." Of the previous winners of Miss England and Miss World, Beasley says, "most are real natural beauties who don't wear too much makeup at all."

Ten Miss England finalists have entered the Bare Face Top Model round, after posting a makeup-free photo of themselves on social media in a black vest top and jeans. The winner of the round will be fast-tracked to the top 20, according to the pageant website.

Bhasha Mukherjee, a junior doctor and winner of Asian Face of Miss England, shared her make-up free photos with the caption, "Make up is a means of enhancement but how often do the lines get blurred between enhancement and concealment. So often we just hide behind a film of products and even artificial cosmetic enhancements be it Botox or fillers."

"It's just easier to blend into the crowd than own your flaws forgetting that it's these that make you you. So here I am owning my flaws. My imperfect skin. My short sparse eye lashes and brows. No filter. No enhancement. No Photoshop," Mukherjee added.

Rebecca Gormley, a customer service worker and the reigning Miss Newcastle, wrote on Instagram, "I have chosen to enter this round as i feel it’s an important message to put out to other girls. It is ok to embrace your natural beauty. In the world we live in today there is so much pressure to look good on social media and follow the trend."

"Personally I feel this message is a positive one to put out there and I hope that this may inspire other girls to be themselves. You don’t need to change yourself. Be real be you and let your true beauty shine through," Gormley said.

While the intentions behind the Bare Face Top Model round might be noble, here's the issue: the new round does little to expand the aforementioned beauty standards the pageant upholds. The pageant's past winners, according to a glance at the pageant's "Hall of Fame," are still predominantly white, slim, non-disabled and cisgender (there are several BAME contestants in the Bare Face Top Model category).

Here's some evidence of how exclusionary the scene remains: last year, law student Sara Iftekhar became the first contestant to wear a hijab in the Miss England finals, as the BBC reported — but was subsequently subject to online racist and Islamophobic abuse. "I'm quite a tough person but some of the comments I've received online have been atrocious," she told the Daily Mail.

The Bare Face Top Model category seems, by glorifying "natural beauties," to shame those who wear makeup and seek cosmetic enhancements, while purporting to tackle the beauty ideal. Racism, fatphobia, transphobia and ableism are infinitely more pernicious than makeup and fillers; by focusing on the latter, Miss England misses the point.