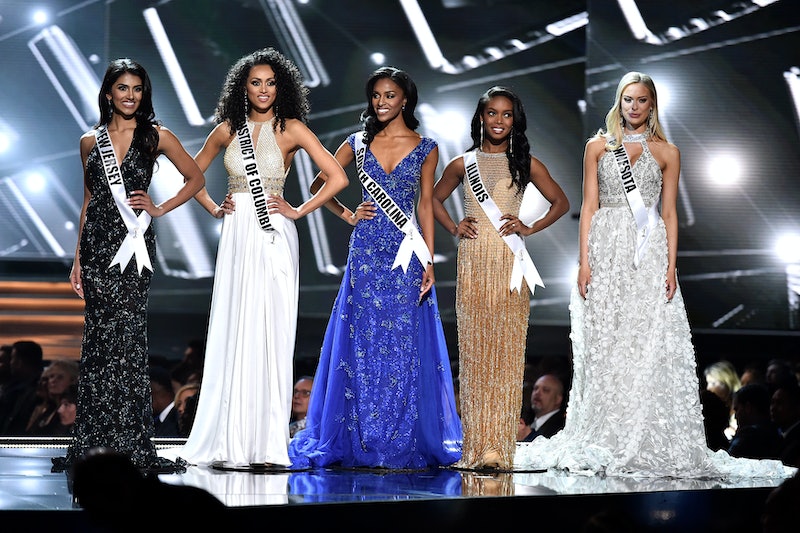 While the goal of every Miss USA contestant is to walk away with the crown, I think Miss USA 2017 First Runner-Up Miss New Jersey Chhavi Verg will agree second place isn't a bad position to be in. Although she didn't win, Miss New Jersey came in second place out of 51 contestants in the ceremony on May 14, and if Miss USA 2017, Miss District Of Columbia, is unable to fulfill her duties for any reason, Verg will take her place and represent the USA at the Miss Universe 2017 pageant. Serious congratulations are in order for this woman. She doesn't need a crown to prove her grace and intelligence, as she demonstrated throughout the night.

Coming in as first runner-up is an honor in itself. It shows how hard Miss New Jersey worked to get not only to the national pageant, but to come so close to the top spot. She may not be the evening's big winner, but she's still a winner, and being named first runner-up will open up doors so she can continue following her dreams of empowering women through education.

As a multilingual Indian-American, Miss New Jersey was one of five immigrant competitors, and throughout the night she proved herself to be wise, confident, and powerful. Her best moment came when she was asked in the final round if she identified as a feminist, and she not only answered with a resounding "yes," but explained that feminism is about believing in equality for all.

Even though she didn't take home the crown, there is no doubt that Miss New Jersey is destined for great things. As she said when she made the final five, "The American dream is the idea you can come here with nothing, and if you are willing to work hard, you can do anything. You can change the world, and that's what I’m here to do."

Miss New Jersey is on the right path to do just that.