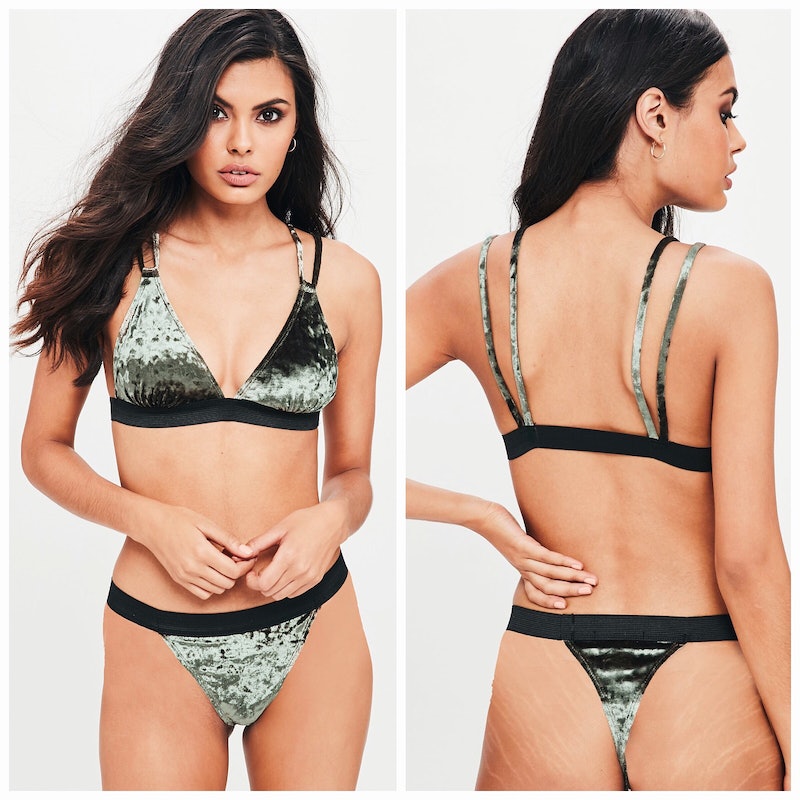 Fashion advertising isn't exactly the golden standard when it comes to body positivity. From photoshopping fails to inaccurate representations of plus bodies, the fashion industry has a long way to go with its marketing. However, one brand is embracing change. Missguided has stopped photoshopping models' stretch marks, and it's a step in the right direct for the brand and the fashion industry as a whole.

According to Refinery29, Twitter user Marnie Polk recognized the change in Missguided's images and commended the lack of photoshopping in a tweet, It wasn't long before others began to congratulate the brand on the change on social media. However, Missguided isn't alone in their decision. They join a badass gang of other brands that have gone the zero photoshopping route.

Back in June, a similar social media discovery happened with ASOS. When the brand's summer swim line debuted internet users realized that stretch marks were no longer being edited out by the brand. American Eagle's underwear brand Aerie announced back in 2014 that it would no longer be photoshopping models. As a result, the brand show a spike in sales. Then, a similar announcement was made by ModCloth that same year when they took a no photoshopping pledge.

The response to Missguided's decision appears to be overwhelmingly positive, based on social media responses. From women excited to see a message of body positivity being spread by another brand to those calling for more companies to join in, the general consensus is that Missguided is making strides and fans are here for it — stretch marks, cellulite, and all.

With other brands already on #TeamNoPhotoshop, perhaps Missguided's decision will act as a call to unedited action.

By showcasing bodies as they are, Missguided is sending the message that all bodies are "normal" bodies. While stretch marks and cellulite are often considered flaws to be removed, Missguided is joining the growing movement to normalize these features.

The brand seems to be aware of the praise from consumers, retweeting a post from a user who praised the decision to go "#allnatural."

The decision to stop photoshopping isn't the only body positive move that the brand had made lately. Missguided's Keep On Being You campaign features people of color, trans women, plus women, and people with disabilities. The campaign is meant to dispel the notion that "perfection" exists and encourage Missguided fans to feel confident in their bodies.

While the campaign and the decision to quite photoshopping images is a fantastic step in the right direction for the brand, the next is crafting a more inclusive range of sizes. Currently, Missguided's plus range begins at a size 12 and ends at a size 24. However, sizes 22 and 24 only have a single item available on the site. Meanwhile, the largest non-numeric size is an XXL. With other plus brands extending to sizes 28 in multiple items — like Eloquii and Lane Bryant — an expansion in size inclusivity appears to be the next logical step for Missguided.

At the moment, however, it's important to give praise where it is due. Missguided's decision to stop photoshopping coupled with their Keep On Being You campaign is a major, inclusive step forward for the fashion industry.

Bring on the stretch marks, unedited bodies, and diversity, Missguided. The world is ready.