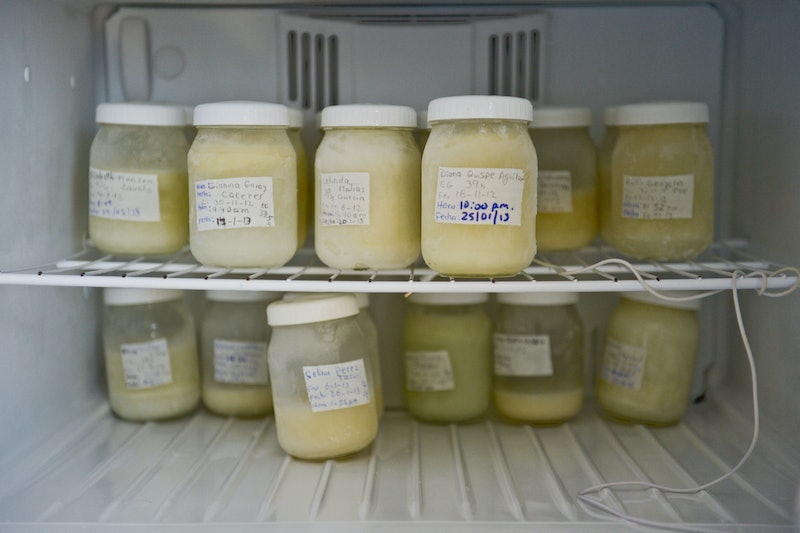 As Hurricane Irma barrels toward Florida, victims of the recent catastrophic Hurricane Harvey are just beginning to assess the damage. Some people have lost everything, and for moms with babies, that includes breast milk. A Missouri mom is helping Hurricane Harvey victims by donating more than 1,000 ounces of breast milk, according to USA Today. While diapers may be top of mind when considering donations to hurricane victims, a breast-milk shortage likely isn't on most people's radar. However, breastfeeding moms under extreme stress could produce less breast milk than they normally would, which means they might not be able to adequately feed their babies.

Danielle Palmer, who lives near St. Louis, donated her surplus of frozen breast milk to moms recovering from the Texas hurricane. Palmer took to Facebook to share the news, writing: "Truett and I just sent 1040 ounces of liquid gold to help mommas with babies in Texas! So thankful we are able to help out in this way!"

USA Today reported that Palmer's 8-month-old son Truett is unable to nurse due to a congenital heart defect, so she has been pumping and freezing her breast milk every day since he was born.

"I have two other boys," Palmer told USA TODAY. "I’ve always had an oversupply. When I first had Truett, I was pumping 16 to 20 ounces per pump. All of that milk was going straight to the freezer."

Stress from war, natural disasters, and even watching a scary movie can lead to lower milk production in nursing moms. "The mother in a stressful situation may say that she has 'lost her milk,'" says La Leche League International, a nonprofit breastfeeding support group, citing The Breastfeeding Answer Book. "It is not unusual for breastfeeding mothers to notice a temporary drop in their milk supply or a delayed or inhibited let-down, or milk-ejection, reflex when they are under great stress."

The stress of trying to rebuild their lives after Hurricane Harvey has created a need for breast milk donations for nursing moms, and Palmer was able to direct her donation — via Guiding Star Mid-Missouri — to specific Texas moms in need, according to USA Today. A lactation consultant and a midwife drove the donation to Texas, along with other baby supplies.

"There are a lot of us moms who really just want to help each other," Nicole Edwin, lactation consultant and president of Guiding Star Mid-Missouri, who helped deliver the milk, told USA Today. “We were especially looking for moms who were displaced and looking for milk that were affected by the hurricane."

Palmer told St. Louis news station KMOV that she had an over abundance of breast milk because her son was fed through an IV for the first few months of his life. When her son's speech therapist suggested she donate some of her supply to Harvey moms, she immediately starting packing it up.

"We have each other’s backs. We take care of each other. Breastfeeding is hard. Whether you're pumping or feeding or however it may be, it's hard," Palmer told KMOV via Skype. "And we are like momma bears. We protect one another."

In addition to moms who may be experiencing a decrease in their milk production, other moms don't have any place to store their pumped milk if they are without electricity, and some moms lost their breast pumps in the storm. Despite the tragedy of Hurricane Harvey, Palmer is grateful that something positive is coming from Truett's difficult start to life.

"I can’t imagine being in a situation where you’re losing everything and just the fear of all of that," Palmer told KMOV. "All I could do was sit and pray for the moms and dads and kids. Beauty can come from this. It won’t be bad forever."

Moms who want to donate breast milk are encouraged to locate a milk bank near them for a screening. Additionally, USA Today reported that the Texas Department of Health and Human Services has a breastfeeding hotline (855-550-6667) for breastfeeding support, which includes help for formula-feeding mothers who don't have access to clean water.

More like this
25 Things I've Reduced My Life To, In Addition To WFH In My PJs
By Ginny Hogan
7 Things We Learned From Rebekah Vardy's First Post-WAGatha Christie Interview
By Sam Ramsden
What We Know About Where Caroline Watt Is Now
By Catharina Cheung
6 Pilates Arm Exercises That'll Unwind Tight Shoulders
By Carolyn Steber
Get Even More From Bustle — Sign Up For The Newsletter