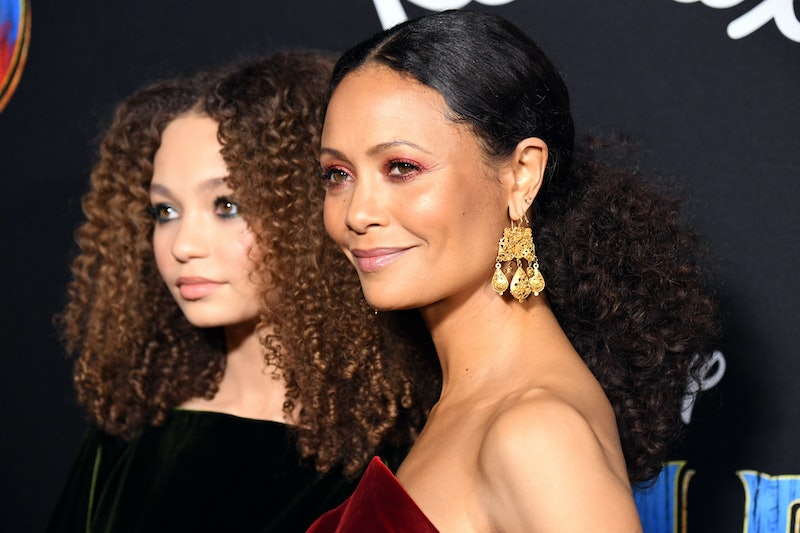 All teens have hormone monsters or monstresses — but on Netflix’s Big Mouth, they actually have names. In Season 3 of Big Mouth, Missy finally gets one to call her own and Thandie Newton, the voice of Missy’s hormone monster, is a name you’ll definitely recognize.

According to her IMDB page, Newton has been working steadily since the early 1990s, but she is perhaps best known for her role in the 2004 Oscar-winning film Crash. She’s also appeared in films like The Pursuit Of Happiness, Norbit, W., and Solo: A Star Wars Story. Newton is no stranger to television, either — she’s had starring turns on ER, The Slap, Rogue, Line Of Duty, and, most recently, Westworld, where she plays Maeve Millay, one of the Hosts on the show. Newton’s range of work errs toward drama, so it’s fun to see that she’s leaning toward comedy with the irreverence of Big Mouth. Perhaps playing an almost-sentient robot for all these years made her yearn for something a little more light-hearted.

Thee 45-year-old Newton is not only an actress but an activist, too. Per The Telegraph, in 2018, she spoke out against the Time’s Up program, saying that she wasn’t invited to be a part of it despite the fact she had been talking about inequality and sexual harassment in the entertainment industry for years. "When Time's Up was put together, to not be invited to be a part of it, was very, very painful," she said. "It's hard for me, as someone who has been talking about it for a long time... it's lonely."

Though women like Natalie Portman, Jessica Chastain, and Meryl Streep were involved with the organization, Newton says she wasn’t invited because she wasn’t notable enough. “I wasn't mainstream enough and I wasn't going to be at the Oscars this year, even though I am having a kind of renaissance in my career,” she claimed at the time. (Per PEOPLE, Chastain said of Newton’s statements that “no one is unwelcome” and that Newton was “brave” to speak out.”)

Newton also made headlines in 2018 for being the first black woman in a lead role in a Star Wars film. “I am the first dark-skinned woman in a lead role in the Star Wars legacy, which is both great, that it is finally a correction, and awful, that it’s taken this long," she told The Guardian. "Even Lupita Nyong’o’s character [Maz Kanata] was CGI."

Right now, Newton says she's writing her own scripts and developing her own roles — roles that she wants to play. "I am obsessed with the female experience. I don’t actually think I could write as a man,” Newton told The Guardian. “And that is everything we have in cinema; that is how our identities have been fed back to us — from a male perspective.”

One could argue that Missy's new hormone monster fits into Newton's desire for a female perspective, even when it comes to the messy days of puberty.

More like this
The Sean Bean Intimacy Coordinator Controversy, Explained
By Sam Ramsden
At 28, Lesley Manville Was Acting, Picketing, & Singing Kate Bush Songs
By Olivia-Anne Cleary
Here’s Everything Coming To & Leaving Netflix In August
By Jake Viswanath
What’s New On Netflix: 'Never Have I Ever' & 'Indian Matchmaking' Return
By Arya Roshanian
Get Even More From Bustle — Sign Up For The Newsletter