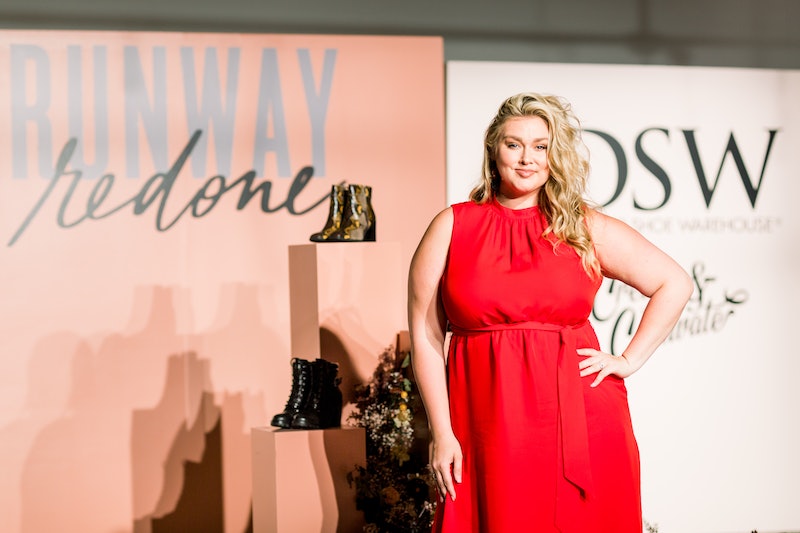 Throughout history, but especially when I was growing up in the '90s, one very specific trait was required to be a model: thinness. So, my size 22 self meeting size 16 Hunter McGrady at New York Fashion Week — where she hosted DSW's first Runway Redone Fashion Show on Sep. 4 — felt like a warm welcome into the fashion industry that I'd rarely experienced in the past.

Backstage, I feel a kinship with McGrady the moment I see how much space she's taking up in the all-white, echo-y stage room we're assigned to for our chat. There's not a glam squad in sight: Instead, the model is packing on her own blush, with her supplies strewn across the couch. As soon as she notices me, McGrady clamps her compact shut and scurries to move her large makeup bag from the gray couch to make room for my own thick behind.

McGrady tells me how she eagerly awaits to see designers show more size inclusive collections each Fashion Week. McGrady admits, “I’m usually a little bit let down, but this year, I’m hopeful, and people like DSW, who are doing it right, gives me the strength to keep on going.”

The DSW show was indeed inclusive. From the moment the first model, who was Black, came out from behind the warehouse pillar, I knew the show was different. Shorter models, paraplegic models, Asian models, and models with naturally coily hair followed suit on the C-shaped runway. This catwalk featured everyday women — and even a few of the brand's employees — of various ages, sizes, ethnicities, and abilities strutting down a runway their way. Some models posed for several seconds at the middles of the runway, others did a twirl at the end, and some made several stops to dance for each section of the audience. A fashion show as inclusive and body positive as this one is how McGrady envisions the future of fashion shows and the fashion industry as a whole.

“I think that for the last few years the phrase ‘body positivity’ has kind of been thrown around,” McGrady tells me. “I think that a lot of people just kind of say it willy nilly and they don’t truly believe in what it means. And body positivity, to me — and is quite literally the definition — is acceptance of all bodies. All shapes and sizes starting at zero all the way up to 32+. We should all be united on this front, and looked at the same way.”

McGrady originally began modeling at 15 as a straight-size model, weighing in at 114 pounds. However, meeting the fashion industry's demands to shrink her size even more became impossible. When McGrady turned 18, she realized she wasn't supposed to be molded into someone else's shape.

"At age 15, I was told by four agencies that I needed to lose three inches off of my hips to be a model which would have put me at a size 00," McGrady wrote in the Instagram post above. "I would desperately work out for hours and eat few calories per day, HOPING I could fit the bill."

Now, the 26-year-old is embracing her body as is and calling for brands to be more inclusive beyond just the runway.

"Shoes are something that — I means yes, it has a size to it — but it’s not like a body size," she says. "So, even shoe brands, makeup brands, jewelry brands, why aren’t we using different-sized models? It doesn’t really have a size attached to it. I mean I worked with Sports Illustrated and they’re also doing it. They are seeing the need for it and they’re saying 'alright we’re going to jump on board and we’re going to get this movement going.' I hope that other brands follow."

According to the most recent study from 2016 done by the International Journal of Fashion Design, Technology and Education, the average dress size for a woman in America is 16-18. However an increase in the amount of plus size options available to buy online doesn't always translate into more representation in fashion campaigns.

As recent as July 2017, online retailer Boohoo had come under fire for using models who were not visibly fat to push its plus size line. And later that year in December, Wish.com was criticized for using straight sized models to advertise the stretchiness of its plus sized tights. McGrady, along with plenty of other everyday plus size women, are well beyond disgruntled by the discrepancy.

“Right now, the demand [for plus size representation] highly outweighs the supply," McGrady says. "And I think that we have to take that into consideration. As a plus woman, I just have to keep screaming and saying 'this is what we want, this is what we need. Let’s make it happen.'"

As she screams for inclusivity, McGrady also won't be any brand's token fat girl to diversify their image. During Fashion Week, Hunter told Glamour.com that she turned down 32 potential gigs.

"This year I decided: Any event, fashion show, or party that’s going on and is not inclusive, I’m not going to be a part of," McGrady explained. "For me, it’s more important to make it known that I’m not going to support somebody who doesn’t support me."

One popular show McGrady did walk in was the Chromat Spring/Summer 2020 show, alongside model Tess Holiday, cancer survivor and model Ericka Hart, and an entire cast of diverse models of shapes sizes, abilities, and gender experiences.

McGrady has taken a clear stance on ensuring any brand she works with brand "walks the walk" for inclusive representation. And she derives it from building a strong sense of self worth.

Despite the challenges McGrady's faced in the straight size and plus size markets within the fashion industry, she's come to understand that at any size, confidence is key and it's "a lifelong journey."

"At 16-years-old, I learned in therapy positive affirmations" McGrady says, selling me on her routine. "And my therapist was like 'You stand in front of the mirror and you tell yourself: Hunter, you are beautiful, you are enough, you will be successful, you are worthy’ because our minds work that way, and we start believing that because we are that, we just don’t give ourselves enough credit.”