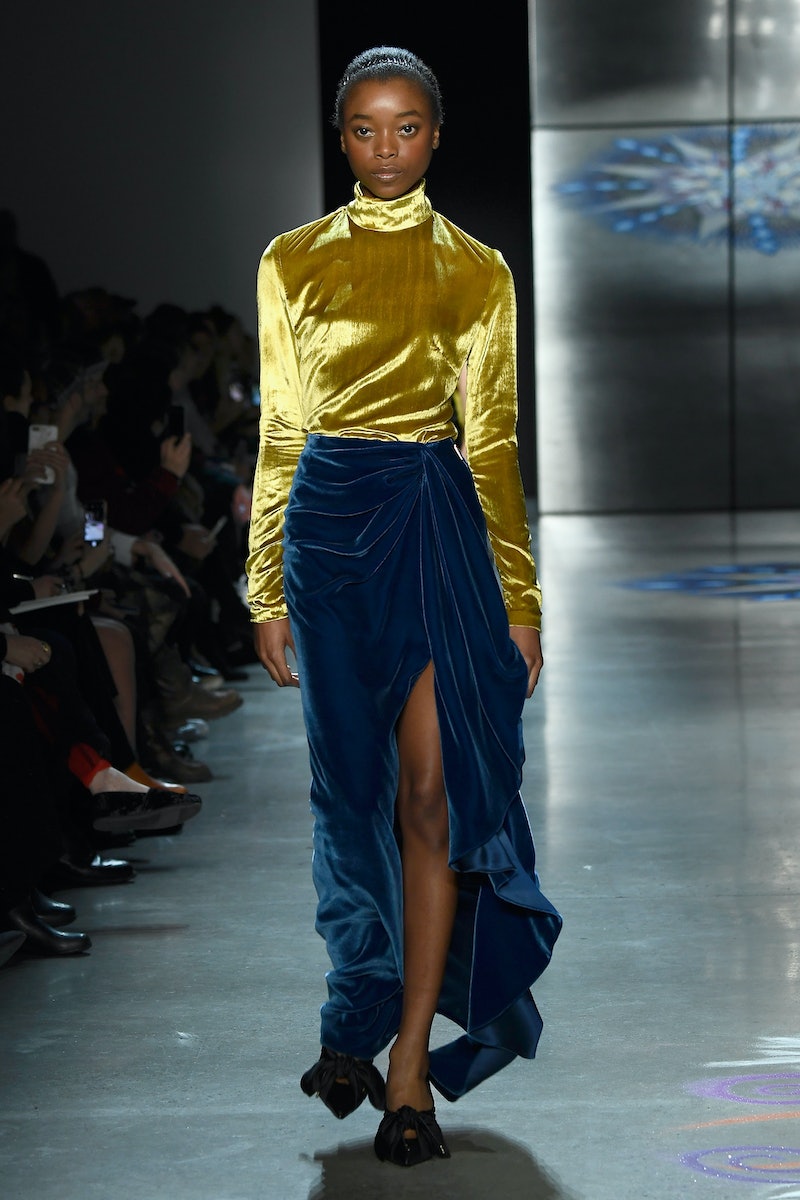 The fashion industry has been criticized for quite some time now for its lack of diversity. From the models on the runway to print campaigns, there's space to grow for both diversity and inclusion. While forward-facing representation matters, model Olivia Anakwe is calling out hairstylists for being unable to work with her textured, natural hair backstage. While the industry may be slowly becoming more diverse outwardly, there's clearly still plenty of work to be done behind the scenes in terms of meaningful inclusion.

According to Teen Vogue, Anakwe took to her Instagram account where she explained what happened backstage at a recent Paris Fashion Week show. The model was asked to wear her natural hair backstage, and was told she would be wearing cornrows in the show itself. Once she arrived, however, hairstylists refused to do Anakwe's hair. Bustle reached out to Anakwe for comment.

She explained that no one on the team would admit to not knowing how to do her hair. One stylist even tried to do the agreed upon style, but began to potentially damage Anakwe's natural locks. Eventually, a Black nail stylist was pulled from her job to do Anakwe's hair for the show despite being the only person present doing nails.

After relaying her experience, Anakwe called out the fashion industry for their lack of stylists skilled in "doing afro texture hair care" as well as stylists themselves for not learning how to work with textured hair. She stated, "Black hairstylists are required to know how to do everyone’s hair, why does the same not apply to others? It does not matter if you don’t specialize in afro hair, as a continuous learner in your field you should be open to what you have yet to accomplish; take a class."

Anakwe's post is more than a call out of the fashion industry's backstage, though. The model also explained that the experience is so much more than stylists not being able to do her hair. These experiences lead to feelings of erasure. She wrote, "I was ignored, I was forgotten, and I felt that. Unfortunately I’m not alone, black models with afro texture hair continuously face these similar unfair and disheartening circumstances. It’s 2019, it’s time to do better."

Anakwe is far from alone. Khalea Underwood of The Zoe Report spoke with five models backstage at Paris Fashion Week regarding their experiences behind the runway. Model Sabah Koj explains feeling similar to Anakwe. She told The Zoe Report, "With hair, they don’t even look at you 90 percent of the time. You go do your hair, and then it starts looking bad. So I carry my Afro pick everywhere, and sometimes my foundation, too. I'm not hesitant to speak up, but it’s just unacceptable. It’s the 21st century."

Fellow model Nella Ngingo explained that even with more diversity backstage, there's a question about whether the desire for inclusivity is genuine. She explained, "In terms of models backstage, hair has been a progress. I see many more women of color backstage. But at the end of the day, I don’t know if it’s done in a genuine way, because nowadays, you’ve got people watching every single show. And they’ll tell you, 'This show only had two people of color, and that’s not a good look for your brand.' It makes me think... do they really do it because [it’s genuine], or do they do it to protect the brand?"

While forward-facing representation may be improving in the fashion industry, backstage, inclusivity still appears to be something that needs to be looked at more closely. Thankfully, there are models like Anakwe, Koj, Ngingo, and more speaking out.