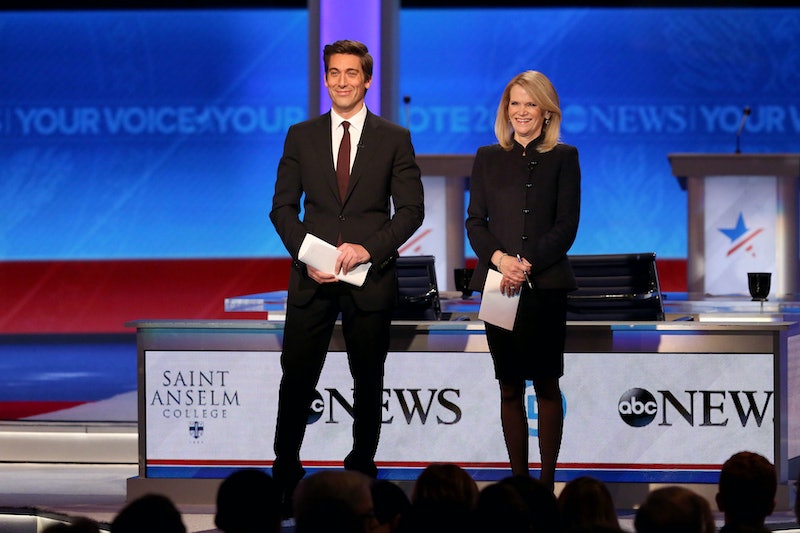 Democrats plan to hold 12 primary debates during the 2020 election — and at every single one of them, a woman will be asking the candidates questions. Refinery29 reported Thursday that under new rules from the Democratic National Committee, the moderators at every 2020 Democratic debate will be required to include at least one woman.

"The DNC is committed to an inclusive and fair debate process," DNC senior adviser Mary Beth Cahill told Refinery29. "That means that all 12 DNC sanctioned debates will feature a diverse group of moderators and panelists including women and people of color, ensuring that the conversations reflect the concerns of all Americans."

In 2016, Gwen Ifill and Judy Woodruff became the first female duo to moderate a Democratic presidential debate, according to Politico. In totality, though, debate moderation is still largely a male-dominated space: Refinery29 reports that the majority of moderators during the 2008 and 2016 campaign cycles were men. The DNC's decision may reflect a desire on the part of the national party to change that.

Although no moderators for the 2020 cycle have been announced yet, past primary debates have occasionally featured only one moderator; this, combined with the DNC's new rules, could result in a debate — or debates — where there are no male moderators at all.

In addition to the lack of gender equality on past moderating panels, debate planners at the DNC are also grappling with exactly how to accommodate the sheer number of candidates in the race: As of this writing, there are no fewer than 23 Democrats running for president. Needless to say, putting that many people on stage for one debate is unfeasible, as it would hardly give any of them a chance to speak for more than a couple of minutes.

A similar situation unfolded in the GOP in 2016, when 17 Republicans declared their candidacies for president. The Republican National Committee responded to this by holding two events on each of the first couple of debate nights: The main debate, which included the highest-polling candidates, and what came to be derisively known as the "kid's table" debate, which was held earlier in the night and featured only the candidates with the lowest poll numbers. The kid's table debates — or, more specifically, the RNC's decision to divide the debate candidates up by polling numbers — were widely criticized, as many found them demeaning to the candidates who participated in them.

The DNC actively wants to avoid such a situation this year, according to Politico. So, although two debates will be held for as long as there are enough candidates to warrant them, the candidates instead will be divided up randomly, Politico reports. Every candidate with at least one percent in early state or national polls will be invited to the first two nights of debate, a relatively low standard that will likely allow most of the candidates to participate.

After that, however, things will become much more stringent: According to CNN, an invitation to the third debate will only be extended to candidates who a) are polling at two percent or more in four early state or national primary polls, b) have 130,000 unique donors to their campaigns, and c) have 400 distinct donors from at least 20 states.