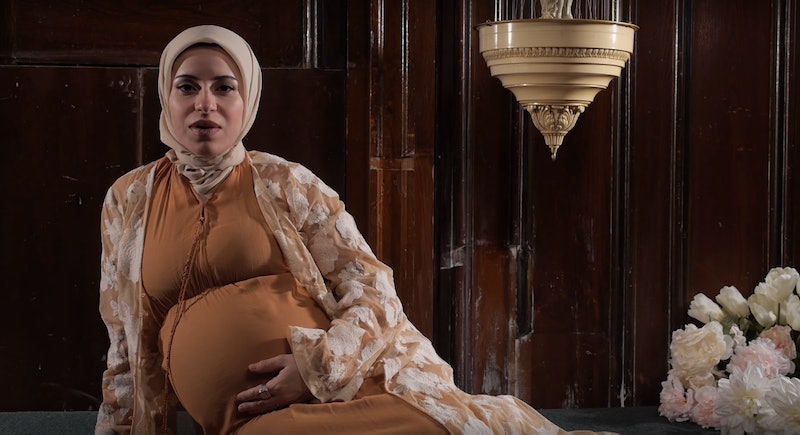 The next time someone says Muslim women can't be feminists, direct them to the music video for "Hijabi" by Mona Haydar and watch them deflate as they struggle to reconcile the song's powerfully unapologetic theme with their stereotypical view of Muslim women. Released on Muslim Women's Day, which took place for the first time on March 27 this year, the anthem shatters the typical Western narrative of the oppressed hijab wearer. In the video, Haydar — eight months pregnant and surrounded by a group of dancing Muslim women — raps about her personal choice to wear a hijab "even if you hate it." At the same time, the song calls for gender equality and liberation, something you'd be hard-pressed to describe as anything but feminist.

"Women are 50 percent of the population and I just wanted to say that it's all love, no matter who you are and where you come from," Haydar tells Bustle in an interview, adding that "women's bodies are under fire all over the world." To give you an idea of its unapologetic nature, the song opens with a list of questions Haydar is commonly asked — things like "don't that make you sweat?" and "don't that feel too tight?" — followed by an admonition to get a life. Overall, Haydar says she tried to keep things high-spirited. "We just wanted to make light of it and talk about that stuff in a fun, loving way," she tells Bustle.

Although Haydar has precisely zero time for the haters, the song is more supportive than combative. It celebrates diversity, asking us to "love women every shading," and a diverse group of dancers is featured in the video. As Mic points out, black female Muslim visibility, especially in the music industry, is hard to come by.

The song is at least partially a response to the current political climate. For the past two years, hate crimes against Muslims have dramatically increased. According to the Southern Poverty Law Center, anti-Muslim groups nearly tripled between 2015 and 2016, and last year, the FBI released data showing that hate crimes perpetrated agains Muslims increased by 67 percent in 2015.

However, anti-Muslim sentiment is hardly restricted to travel bans and religious registries; as Haydar's video demonstrates, it can be more insidious. Often, the judgment directed at Muslim women centers around wearing the hijab, so it's perhaps no surprise that Haydar drew from personal experience when writing "Hijabi."

Since it was posted last month, the video has received widespread attention. "There's definitely been a lot of backlash, especially from people who maybe have some prejudices," Haydar admits; however, she says she's focused on the positives — of which there are plenty. "Hijabi" has been viewed more than 750,000 times on YouTube, and it's reached more than a million on Facebook. Furthermore, a quick glance through either comment section shows that the video is setting out what it accomplished to do: inspiring women to empower and love each other.

You may recognize Haydar from the Ask a Muslim campaign she and her husband set up last year, allowing passers-by to ask questions about the religion. Whether you're a fan of her music or her activism, keep an eye out for Haydar in the future — she's planning on releasing an EP this year. In the meantime, it can't hurt to take her message to heart and love women all around the world, no matter where they're from or what they choose to wear.