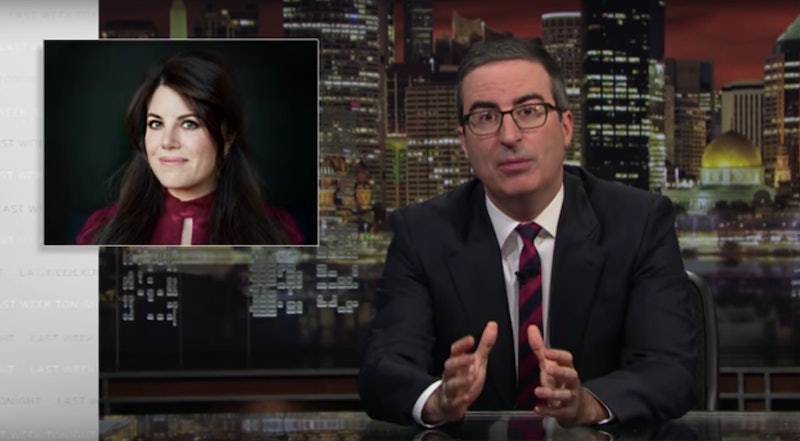 On Sunday's episode of Last Week Tonight, the show's host tackled the topic of public shaming with a noteworthy guest. John Oliver and Monica Lewinsky discussed public shaming and its perils, with the former White House intern reflecting on how damaging it was to be thrust into a critical public spotlight during the Clinton administration.

As he opened his main segment, the late night host noted that he's not fundamentally against public shaming, which is the concept of using the internet and other media outlets to criticize someone's actions. However, Oliver asserted that those who engage in public shaming, like comedians, do need to carefully consider who they are shaming and for what reason. “Look, let’s be honest. We make fun of people constantly on this show. It’s a comedy show," the comedian said. "Although, for what it is worth, we do think, probably more carefully than you might imagine, about who we’re making fun of, why we’re doing it and how."

Oliver cited the example of Monica Lewinsky and her affair with former president Bill Clinton in the 1990s to illustrate a case in which he believes public shaming went too far. "Two decades ago, this country put her [Lewinsky] through hell ... that has to be terrifying," the comedian noted. "The media obsessed over every angle of her story." The comedian also noted with regret that he wasn't exempt from mocking Lewinsky in the past, as he once participated in a Daily Show segment making fun of the former intern.

Oliver then emphasized to viewers that "Monica Lewinsky might actually be the perfect person to remind all of us what the consequences can be to a misdirected flood of public anger." Oliver said that this conclusion became very apparent to him as he interviewed Lewinsky earlier last week.

During this interview, the duo discussed how public shaming stemming from the affair impacted Lewinsky — and how she's managed to stay strong in the face of scrutiny. When Oliver asked how she managed to navigate the intense public criticism she faced, Lewinsky emphasized that she had a strong support network, though stressed that it was very difficult to endure that level of scrutiny at such a young age.

It was an avalanche of pain and humiliation and obviously I could not have gotten through it without my family and ... my friends too. I think at 24 years old it was really hard to hold on to a shred of dignity or self esteem when you're just the butt of so many jokes ...

Lewinsky further emphasized that being repeatedly mocked for her appearance left lasting wounds. "Part of my vanity now comes from just the wound of having been made fun of for my weight, for ... people saying I was unattractive — and it was terrifying." Lewinsky said. "My identity was stolen."

Toward the end of the interview, Oliver asked Lewinsky about whether she believes that (hypothetically) having social media around in the '90s would've made her experience better or worse. Lewinsky noted that it would've likely been both — worse because there would've been even "more opinions," but also potentially better because some of those opinions may have been supportive.

"One of the things that happens with these kinds of [public shaming] experiences is that you start to disappear, you start to feel like you don't matter," Lewinsky told the late night host. "And I think that when somebody sees you and ... just acknowledges your humanity in the smallest way, it really can make a world of difference."