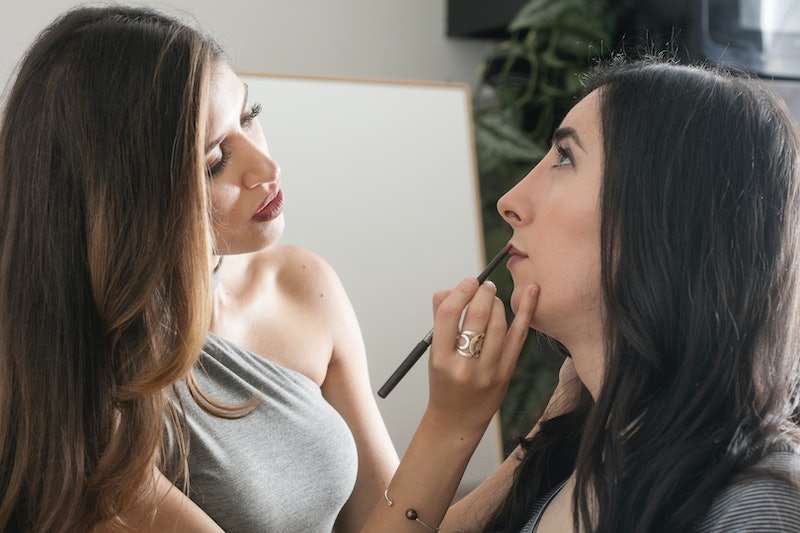 “Imagine moving to a new planet whose customs you are only very vaguely familiar with, where you were given a closet full of unfamiliar clothes and even more unfamiliar chemicals to put on your body. The only thing you had to guide you was a picture of ‘a woman’,” Jeena Bloom, a comedian in New York City, tells Bustle. “You would be unprepared.”

Three years ago, at the beginning of her physical transition, Bloom became a client at NouveauShe. The business, founded and run by stylist and makeup artist Monica Prata, teaches makeup, clothing, hair styling, and “feminine comportment” — meaning traditionally feminine movement and body language — to people who are beginning to publicly transition to a feminine presentation, or are male-presenting but exploring gender fluidity. When she first came across Prata’s business, Bloom was intrigued. “I started hormones in 2015 and was online looking for a transgender-friendly hair salon when I came upon Monica’s website. At first glance, what she was offering seemed too good to be true,” said Bloom. “I thought it was an elaborate prostitution scheme, so I kept reading her website and looking for double entendres. After a few days, when I couldn’t find any, I finally e-mailed her.”

Though she could only afford to work with NouveauShe eight times over a three year period, Bloom said that the consultations were life-changing; Prata “took away that picture of ‘a woman’ and made it so I didn’t — and continue to not have to — stumble into the world unprepared.”

NouveauShe is one of only a handful of businesses in the U.S. that teaches makeup and styling skills exclusively to her clientele. Prata, who is cisgender, officially launched the company in 2008, but she has worked with styling and gender for many years — first in high school, as a stylist at Nordstrom, and later as a MAC makeup artist over a decade ago. While at Nordstrom, Prata first noticed that many male-presenting customers who approached her for help buying clothes “for a girlfriend, wife, or mother” were often shopping for themselves. Prata would help them select women’s clothing they liked while also focusing on making the experience as comfortable as possible, by doing things like bringing the clothes to the dressing room for her clients so they wouldn't have to feel exposed.

While at MAC, Prata stepped in when she noticed that men looking to get their makeup done were turned away by most of the other makeup artists. “The makeup artist would ask, ‘Are you a model? Are you doing a photoshoot?’ or even worse, ‘Do you have a hickey or blemish? Something you want me to cover up?,” Prata told Bustle. “I saw this uncomfortable interaction again and again and was affected by it, because I never wanted anyone to feel ashamed to express themselves. So I would work with these customers, and they would feel a lot better about themselves. They would leave feeling empowered, acknowledged, and respected, as not only a customer but also as an individual.”

These experiences led Prata to start NouveauShe. “I wanted more than helping a beautiful woman coming to me for a new lipstick color,” said Prata. “I wanted to be able to work with someone who doesn’t feel beautiful yet. I’m able to give them something deeper. I get that it may seem surface level, but it isn’t. It isn’t beauty if it isn’t meaningful to you.” She describes NouveauShe clients as having “a desire for self-expression.”

Most of Prata’s clients, like Bloom, find her while searching online for this particular type of service. Prata’s knowledge doesn’t just come from her time in fashion and beauty retail; she also studied male and female bone structure with San Francisco-based facial feminization surgeon Dr. Douglas Ousterhout, who reached out to Prata after hearing positive things about her from his clients.

“If femininity is something you aspire to, you should invest intentionally in that.”

Prata offers a four-hour session for $800 or a full-day session for $1500, all inside her Union Square studio. Some of her clients, especially those who live outside New York City, will spend an entire weekend with her. But a session with Prata does not begin and end in the makeup chair — she will also often accompany her clients out in the city to have a meal or window shop. “I’ll tell my client to, ‘order your food, present your femininity, engage with another human. Don’t be ashamed. If the waiter realizes you’re transgender, that’s okay. Carry it off, be proud, don’t hide yourself,’” said Prata.

One of Prata’s goals in her sessions is helping her clients who want to “pass” — meaning, to be perceived as a woman even though they were assigned male at birth — learn how to do so. But the concept of “passing” is loaded within the trans community. As Jae Alexis Lee, who describes herself as a trans woman, advocate and researcher, wrote in a Quora post that was later re-published on The Huffington Post, “passing is situational and it’s complicated. Some trans people work very hard to pass both because it eases their own dysphoria and because life is safer if you pass. Some trans people push back against the pressure to pass. Some people dislike the term ‘passing’ as though it’s an arbitrary measurement of our success or failure at… what? Being trans? Performing gender ‘correctly’?”

But if a person’s femininity is highly important to them — and for many trans people, it is. Dr. Lourdes Ashley Hunter, who is executive director of The Trans Women of Color Collective (TWOCC) and currently working towards her second doctorate at Georgetown University, tells Bustle she understands the appeal of a business like NouveauShe. “If femininity is something you aspire to, you should invest intentionally in that. It’s just important to remember that being a trans woman isn’t exclusive to femininity and femininity doesn’t validate your trans-ness,” says Hunter.

“I do strive to help my clients achieve what they deem effective and genuine presentation so they can stay safe.”

Aaryn Lang, an activist, organizer and the host of “First Person” on PBS, told Bustle she believes that “with gender being about performance and energy, it has to be uncovered and allowed to flourish in a safe environment. “I would argue that Monica's service is so successful for that reason; she gives trans women a safe space to explore their gender identity, expressions, and mannerisms before they have to try in the world and ‘fail.’”

Some also seek Prata’s help for reasons besides self-expression. The Trump administration’s efforts to deprive trans people of equal rights, from the proposed military ban to rolling back policies that prevent health insurance companies from discriminating against trans patients, have led many to try to get gender-affirming ID sooner rather than later. Prata says she has experienced a 30 percent increase in demand for her services since the 2016 election, and believes that for these clients, paying attention to one’s femininity is a means of affirming one’s personal safety. “I can’t change how others evaluate my clients' worth,” said Prata. “But I do strive to help my clients achieve what they deem effective and genuine presentation so they can stay safe.”

Trans women of color are the LGBTQ population most vulnerable to violence — the Human Rights Campaign tracked 28 deaths of transgender people by fatal violence in 2017, and 16 such deaths in 2018 thus far, the vast majority of which are women of color — yet most of Prata’s clients, regardless of whether they are looking to feel safer or more comfortable, are white. Prata feels her price point is likely a major factor; while transgender Americans are twice as likely to live in poverty than cisgender Americans, the National Center for Transgender Equality reported in 2015 that 40 percent of transgender people who identified as Latinx, Native American, black, and multiracial experience poverty.

In the interest of making her service more accessible, Prata is planning a series of low-cost, small group workshops this fall, which cover topics like makeup application, feminine body language, and, said Prata, “a fun confidence building outing where some of the women, who may have never gone out, will have an opportunity to express their femininity for the first time in the comfort and safety of a group outing.” The classes will be $100 each, with a quarter of class space reserved for clients who can’t afford the class and will attend for free. “It’s not really fair that right now the majority of people who are able to afford my services are the super wealthy and also happen to be white,” said Prata.

Some identify as male and just want “the feminine experience,” while others identify as trans but feel crippled by the idea of transitioning publicly. Most have successful careers and families where they present as male, and in our current, deeply transphobic culture, they fear losing everything if they disclose that their gender identity is female. They keep their sessions with Prata a secret.

One of these clients, who requested anonymity, is a business leader who self-describes as living in a “rural, East Coast town.” He has children and a wife who doesn’t know he works with Prata. He has only visited her studio once, and prefers to speak to her on the phone. He reports no plans to transition.

The majority of Prata’s clients are older and wealthy, and she finds that they are interested in a different vision of femininity than her younger clients. “I think young people today are more comfortable being fluid,” said Prata. “They have less ideas of the binary gender presentation....The body positivity with younger trans people is so much greater than with the older people who are much more critical. They have a much more defined idea of what it means to look feminine and what it means to be feminine.”

Prata feels she has much to “undo” with older clients. “I’m having to undo a lot of stereotypes of what femininity means and what femininity looks like. And I vehemently fight against it. I tell them to not dumb it down, don’t be demure, don’t tone down your personality.”

But with gender fluidity allowing for less rigid presentations of gender, the focus has become being the truest version of one’s self.

“I’m adamant about running a business that celebrates my clients for simply holding space for their femininity. Whether that’s just coming in for the session or setting up a phone call, it’s so valuable and so meaningful. You’re honoring that part of yourself. You’re saying to yourself, ‘yes, this exists, I’m paying attention to it.’”

Bloom believes every penny she spent on NouveauShe was worth it because, “Monica provides an expertise that is completely rare and she should be allowed to charge whatever the market allows.”

More than anything, Prata helped Bloom feel comfortable not only with her appearance but more importantly, herself, so she could find her tribe. “I want to fit in with the people I want to fit in with. I think Monica has given me the ability to do that. For example, there is a secret group of female comics on Facebook. To get into it, you need to be vouched for by two people. I was vouched for by 15 people,” said Bloom. “If I wasn’t really comfortable in my femininity, they wouldn’t be. I can move in a lot of worlds because of Monica.” Though she no longer attends paid sessions with Prata, Bloom now considers her a close friend. After all, Prata is someone who has always seen her for exactly who she is.