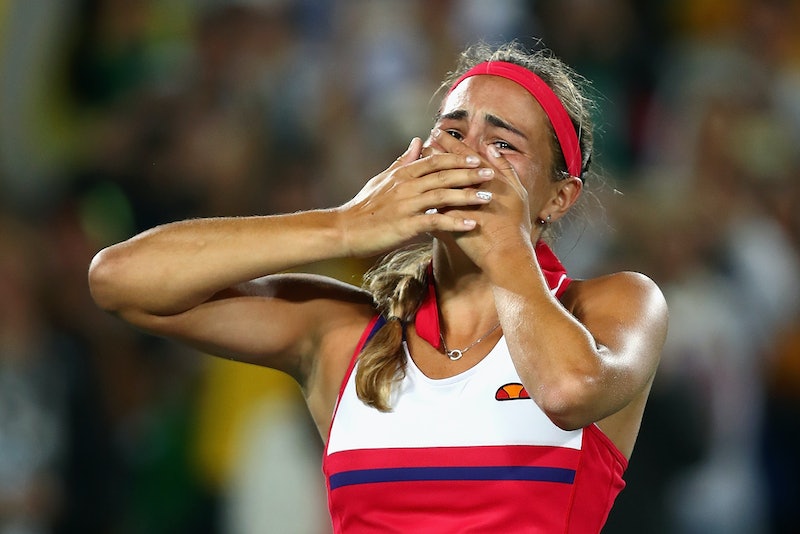 Tennis player Monica Puig rose to international stardom when she became the first athlete — of any sport, and any gender — to win the gold medal for Puerto Rico at the 2016 Rio Olympics, beating the then-#2-ranked Angelique Kerber. For Puerto Ricans, the victory was not just an emotional symbol of the island's ability to thrive as an independent entity, separate from the United States; it was a triumph of athleticism, and a testament to the island's rich tennis culture.

A year later, Hurricane María devastated the island while Puig was competing in the Pan Pacific Open. Puig came back to assist in rebuilding and recovery efforts, raising nearly $200,000 through crowdfunding. Though Puerto Rico is now nearing its second year after the disaster, the island's infrastructure still has not recovered as it prepares for the 2019 hurricane season. Today, voices like Puig's are making sure that Puerto Rico is not forgotten.

Bustle caught up with Puig at the 2019 French Open, where she'd made it to the third round in both singles and doubles, wrapped up. In this As Told To, Puig discusses her career starts and highs, and leveraging her platform for good.

Growing up in Florida, I always copied what my older brother, Ricky, did, whether that was Tae Kwon Do or swimming. But that got old quick. When I was six years old, my mom suggested I try playing tennis. I picked up the racket and just kept playing. I got to the point where it just became my whole life.

It wasn’t an easy decision to go pro at 16, but it was a chance I couldn’t refuse. I wanted to see what doors I could open for myself. When the opportunity came to play in the 2016 Rio Olympics women’s tennis finals, I left everything out on the court to absorb that whole moment. When I won, it was just a surreal feeling. I couldn't really understand the magnitude of what happened. I’d beaten Angelique Kerber to become the first Puerto Rican ever to win the gold medal.

My brother especially was super thrilled. He wanted to take the medal with him to his work, to show everyone. He was, and is, the proud big brother. He’s been there for me through everything. We would go back to Puerto Rico every summer to strengthen our roots to the island. I still go back every year once my season finishes.

When I landed in Puerto Rico after the Rio Olympics, it was an explosion of people celebrating. I was driving down the highway with a police escort, and people were stopping traffic to wave back to me. That was huge. It was like nothing that I had ever experienced in my whole life. When you accomplish something so big, there are hardly any words to describe the amount of emotion that goes through somebody.

I'm definitely a person who likes attention, especially from my family. I've kind of been sheltered a little bit because I'm the youngest in my family, the baby. But in this sport, you have to really be tough. Sometimes you need that tough love. With Latinx families, we don’t like to see anybody sad, we don’t want to make anyone angry. But growing up in this sport, I learned that I needed to have a lot of grit to succeed.

I put that idea — having grit — into practice when Hurricane María hit Puerto Rico in September 2017. It was a huge tragedy for the island. I flew down with fellow tennis player Maria Sharapova and got up close and personal with people, and asked what they needed. In situations like that, you have to put yourself second to people who need your attention first.

I’m always going to help [the people of] Puerto Rico with whatever they need, and make the world know what Puerto Rico’s all about. It’s an island that’s given me so much. But it's also taught me that you have to enjoy every moment that you have because you never know — it can go so quickly.